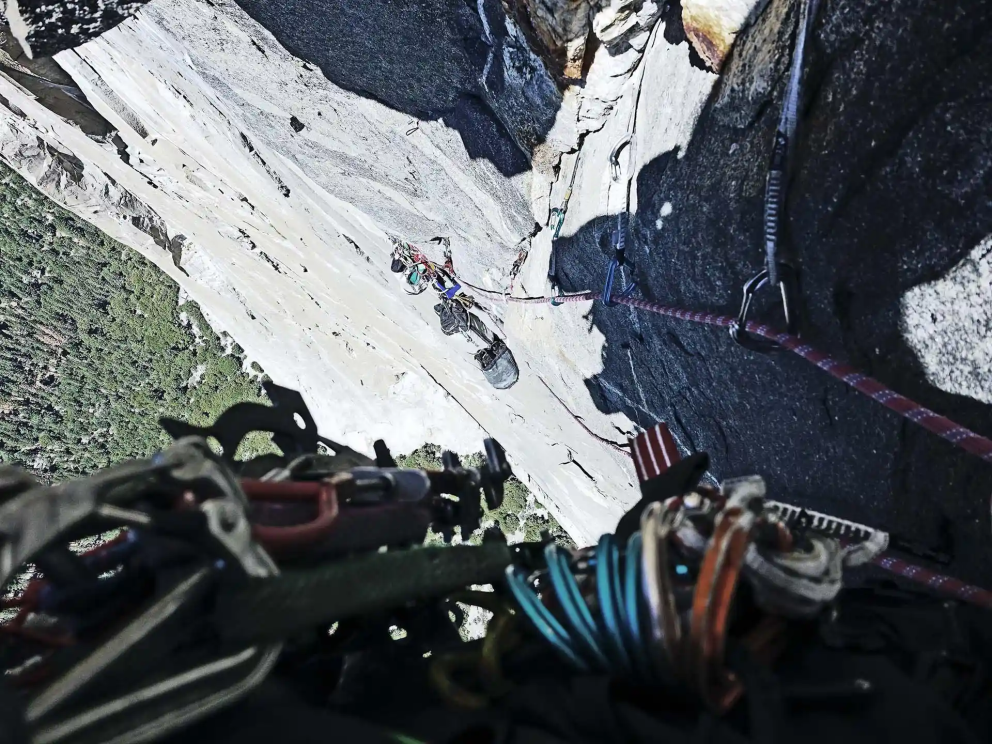 I’m sure everyone’s seen the film Touching the Void, perhaps the most faithful climbing film yet made, showing the beauty, passion and horror of alpine-style climbing – baring the ‘Phantom of the opera’ style makeup of course. Probably like me when you watch the film you end up asking yourself ‘what would I do in that situation when it comes to the infamous knife scene - always a good conversation piece when watching with non-climbers. The last time I watched it with non-climbing friends they asked me how on earth I could put myself in such hazardous situations, to which I replied that I had a few tricks up my sleeve which would perhaps avoid getting me into the void in the first place, a pretty flippant comment really, but an interesting mental exercise. Afterwards, I started thinking about what I’d said, and thought a bit more about what I’d do if I was unfortunate enough to find myself in Joe and Simons shoes.

#1 HOW TO DESCEND WITHOUT A BELAY SAFELY

Joe’s broken leg came about while down climbing – forgoing a traditional abseil for speed. Having seen Touching the void most climbers will be hesitant to downclimb a steep wall of ice sans belay, but what if you don’t have any other option, perhaps if there are no anchors to abseil from?

This can often happen on snow or rock descents where the rock or snow doesn’t offer up any good anchors.

What you do in this scenario is to use your partner as an anchor so you can downclimb on a top rope, and then simul-climb downwards. The trick is that the leader (the one going first) places gear regularly on the way down so that the second is protected once they begin to descend without the support of the rope. This only works if you can downclimb easily, and the belayer can brace themselves adequately but works very well when descending gullies, exposed slabs or dangerous slopes (in an avalanche that single runner could be a lifesaver).

This technique is very good on many traditional mountain descents where you must down climb and scramble, which is most often done un-roped and on the ground that can be wet, loose and vegetated. By staying roped up, with the leader placing gear, you greatly reduce your chances of a broken leg or worse (also remember not to take your helmet off until you get to the bottom – having it clipped to your harness when your mate kicks a rock on your head is pretty stupid).

#2 HOW TO DO A TWO DOUBLE ROPE LOWER

In the rescue of Joe, Simon tied both their ropes together and began lowering Joe down the mountain. Due to the knot joining the ropes Joe had to secure himself after 50 metres while Simon took the rope out of his stitch plate so as to pass the knot. Once lowered over the ice cliff Joe’s predicament was due to Simon’s inability to pass the knot, as he was unable to take his weight off the rope. If this had been possible then there’s a good chance that Simon could have been able to lower Joe all the way to the glacier (probably into the crevasse – but that’s another matter!).

The problem is how do you do a two rope lower without having to pass the knot? This is actually very simple and is a very good trick to learn for anyone who climbs multi-pitch routes, greatly expanding your self-rescue skills (if you can safely lower your injured partner to the ground it greatly reduces the complexity and time involved in a rescue).

To do this tie both ropes together with an overhand knot leaving at least 12 inches of the tail (as you would when abseiling). The overhand is not ideal for this kind of loading, especially on very thin, wet or icy ropes, so once passed I’d advise tieing a backup knot in the tails via a second overhand. One thing to never do is use a figure of eight – which could roll off the ropes!

Once tied together clip the rope into an HMS (or double HMS for more friction) with an Italian hitch (Munter hitch). Using this knot you’ll be able to pass the overhand with some manipulation quite easily (once passed back up the knot).

• Clip the end of the rope to your harness so you can’t inadvertently drop the person you’re trying to rescue!

• Put a prusik loop on the rope as a back up using a Kleimheist knot. Due to the way an Italian hitch locks you’ll need to place this on the dead side of the rope (after it leaves the karabiner).

Once your partner’s safely on the ground or at a belay, you can either abseil down the rope (leaving it fixed) using either a Munter hitch (passing the knot easily) or with a belay plate, in which case you’ll need to pass the knot using prusik loops conventionally or have your partner unclip so you can pull up the rope and make two abseils to reach their position (the only option on multi-pitch self-rescue).

So what’s the chance of ever having to use this technique? Well any self-rescue technique is learnt with the hope you never have to use it, and this is no different, yet there are some situations where it can prove handy. One such situation is lowering someone who’s not confident to down climb by themselves (they can’t place gear in this situation due to the knot), a good technique for steep gully descents on alpine or winter routes.

#3 HOW TO CUT A ROPE WITHOUT A KNIFE

Luckily for Simon when it came to the fateful deed of cutting the rope he had a penknife in the lid of his sack, but what would you do if you didn’t have a knife at hand? Many climbers carry a penknife on their harness for cutting rope (or belay loop) for self-rescue, but a lighter alternative is to carry a short length of 2mm perlon cord, which can be clipped in with your prusik loops. To cut a rope or a sling, simply wrap the cord once around the material you want to cut, then pull it backwards and forwards until it melts through it – which takes about 2 seconds! Of course, the only problem with this is you can’t spread cheese on your bread with a length of cord!

Let’s just hope you never have to lower your mate off Siula Grande top find out if it would make a difference!