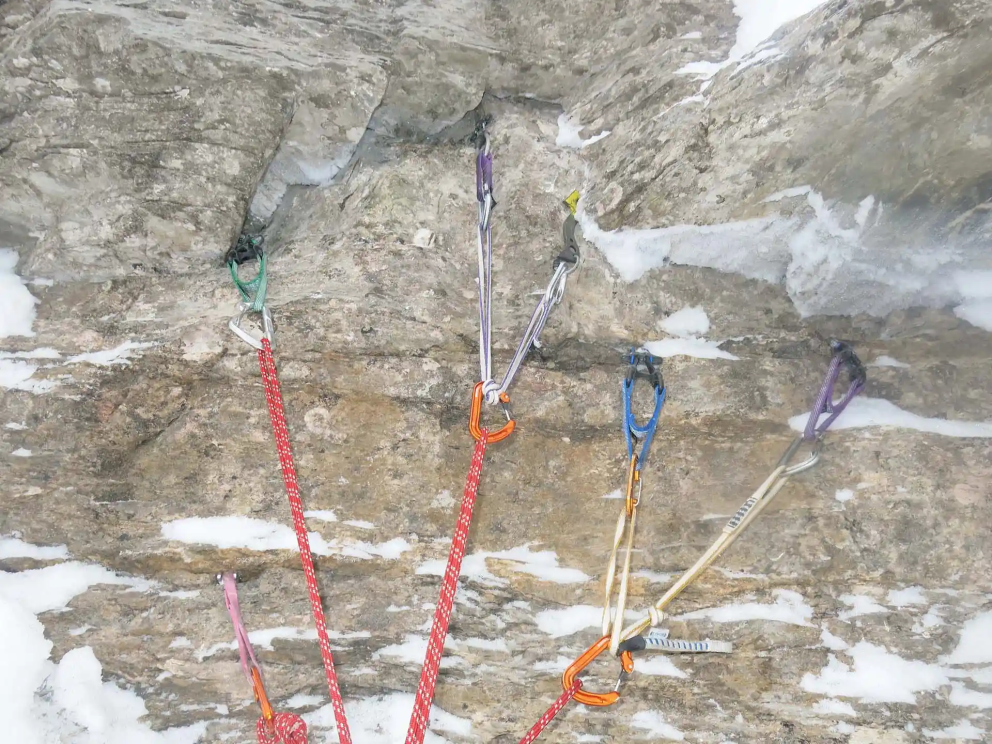 Before you accept a bad anchor, meaning one that you suspect could fail, try penduluming across the route to find something better, perhaps round a corner, or jug back up and look for something better at the expense of a full length rap. If you see something better but canā€™t reach it you may have to jumar way back up, pendulum, place some pro, then pendulum off that in order to make a long diagonal rap. Don’t fall into the trap of making do with what you find at the end of the rope! Even in all my hundreds of abseils Iā€™ve only once had to abseil of a single nightmare anchor (the tip of a knifebladeā€¦ gulp). There is always something good somewhere you just have to find it. If forced to go off a bad anchor then here are some options. Be warned these are for extreme situations, and so are equally extreme. Yet never the less Iā€™ll cover them because such situations have happened to me and Iā€™m still hear because of them.

As soon as you begin rapping off your bad anchor keep an eye out for some protection. When you find some clip it into one strand of the rope, and continue placing gear as you go down. This means that if the anchor fails you and the rest of the team will fall as far as it took you to find that pro. Not a nice scenario but better then nothing. You can also just do a short abseil and make the first descent anchor your next anchor, even if itā€™s only ten feet lower. On the way down the second removes the gear as they reach it, meaning they are safeguarded as well as long as they are using a prussic and the ropes are tied into the next abseil anchor. Always be aware of how much force youā€™re applying directly to the anchor. Move down the rope slowly and without jerkiness and try and keep as much weight off the rope as possible. Be aware that the more the rope runs over objects the more the weight is decreased on the anchor, with the greatest strain coming at the beginning on the abseil, meaning if possible it might be worth down climbing before you commit to the abseil. Down climbing instead of abseiling is the safest way to avoid a bad anchor. This can be done by belaying the leader down until they find a good anchor. As they down climb they should place as much protection as possible to safeguard the second, who they will belay down. This is often the best way to descent in deep snow. If you canā€™t find any anchors you can sacrifice one rope and use this as the anchor point, leaving it attached to the anchor above and abseiling off the end with your remaining rope. If youā€™re close to the ground then you could just tie both ropes together and do a double abseil, passing the knot half way. The leader should be equipped to return up the ropes in case they donā€™t reach the ground. The most likely reason for doing such an abseil is not because of a bad anchor, but because you know youā€™re almost benighted (no head torch), or you know youā€™ll die if you donā€™t get off immediately (like youā€™re close to hypothermia), and so this option allows you to get off and come back to your ropes at a latter day and finish the descent.