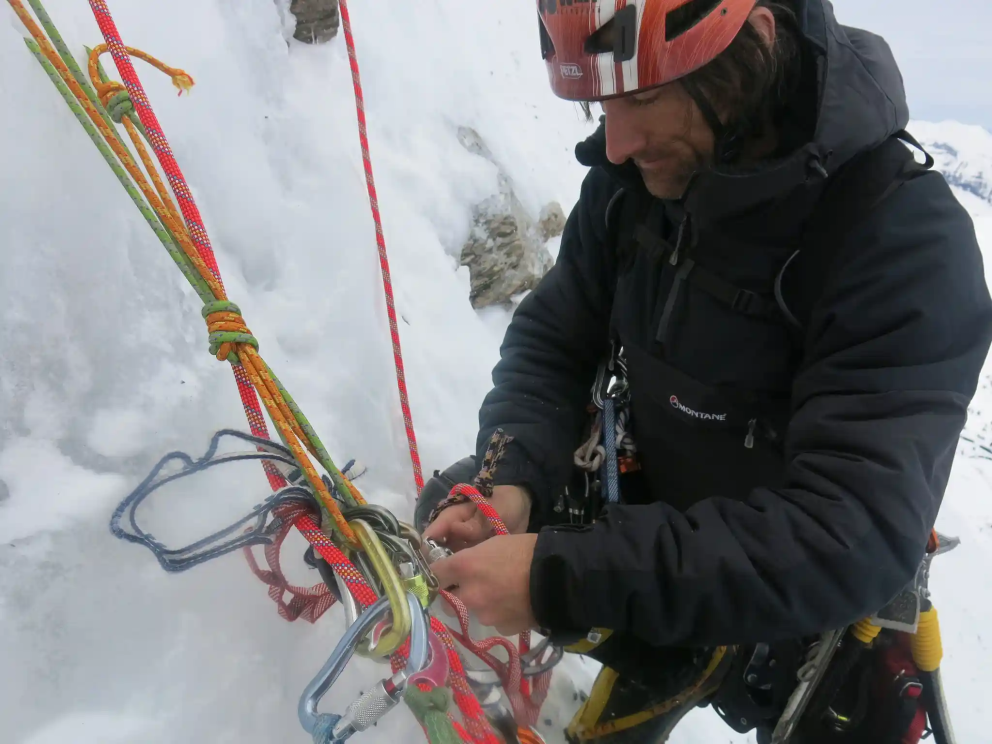 When the ice is meagre or melting away, the rock’s cracks are uselessly chocked with verglas, and the turfs as thin as prince Charles’s hair, building a solid belay can be pretty tough. Very often you settle for something that you know is far from perfect, only regretting you didn’t try harder when the leader’s crampon falls off halfway up the next pitch! In the past perhaps you could be forgiven for poor winter belays as everyone knew that you were in fact soloing most routes anyway, but these days climbers are much more willing – and able – to take falls, and on the harder climbs falls are the norm, not the exception. The danger lies on climbs where there is an increased chance of a fall (bad ice or turf, poor weather, avalanche/spindrift danger etc), yet you make do with a crap belay because that’s what you’ve always done. When you see your mate hurtling back down the pitch towards you it’s obviously too late to make things better – and praying the belay will hold isn’t conducive to a good day on the hill (or having your partner taking a fall factor 2 either!). I’ve had my fair share of bad belays – some of which were so poor I daren’t even lean back on them – let alone trust them to hold a fall! And I’ve lost count of how many times I’ve looked down and tried to work out if we’d survive the ride if it did (“there’s always the chance the rope will snag on the way down”), but as I said, such thoughts – although common in winter climbing – are not good. So here are a few tips so that maybe this winter your belays will in fact be belays – not just a selection of junk slung together for a rest!

I recently saw a test carried out where a Dyneema sling was subjected to a factor 2 fall with an 80kg weight. Much to my surprise the sling simply broke under the load, primarily becomes it had no shock absorbency. The test was then carried out using an equal length of 10mm dynamic rope (tied with a figure of eight at each end). This time the rope held the weight, due primarily because both the rope and the knots allowed the force to be absorbed more slowly. This obviously points to the fact that when the belays runners are poor it’s worth leaving that cordelette on your harness and using your ropes instead. It may not seem like you’d be gaining that big an advantage doing this, but when you take into account the dynamic properties of the rope, plus the shock absorbency of all your knots, then this can be considerable. One thing to remember is that the more rope in your belay the greater the shock absorbency, meaning if you have the rope available, then try to extend yourself from the belay.

THE FIGURE OF NINE

If you want to further maximise your belay’s shop absorbing powers then one good trick is to use the chunky figure of nine knot instead of a clove hitch at all your tie in points. The figure of nine has vastly higher sock absorbency compared with a clove hitch, and is easy to both tie and untie – and if things are really bad you can even tie a fig of10, 11 or 12!

ADD A RIPPER SO YOUR BELAY WON’T!

Shock absorbing slings are slowly catching on in this country, and they can be added to your belay set up to further increase belay security. You do this by attaching yourself to the belay as normal, then place the shock-absorbing sling between your harness and your belay, so that if the load comes directly onto you then the sling will rip – but you aren’t depending directly on the sling.

ALWAYS PLACE A PIECE STRAIGHT OFF THE BELAY

If you’re going to reduce your fall factor then it’s vital that you don’t fall straight onto the belay. In an ideal world, this means placing a runner as soon as you leave the belay (always a nice moment for both the belayer and leader!). Unless the runner is 100% bomber then it’s also worth placing a shock absorber on this runner, as it will have the greatest force applied to it if you fall, as you will still have very little rope out (if you’re ice climbing then use your longest screw at your first runner for the same reason).

IF YOU CAN’T PLACE A RUNNER THEN CLIP THE BELAY

Ideally, you should aim for three runners in your belay (or more if the three you have are crap!). This gives you the option of clipping one of the belay pieces as your first runner so as at least to avoid a factor 2 fall. When setting up your belay it may be worth taking this into account and adding a specific high belay piece that acts both as the first runner and as part of the belay matrix, so that you both gain some security. Again if using part of the belay as your first runner use a shock-absorbing sling, and never clip your rope directly into the belay set up’s karabiner, as this could cause your rope to rub and melt the belay connection in a fall.

GO FOR A DYNAMIC BELAY

It’s worth repeating that a dynamic belay will also improve things dramatically (using a body belay or figure of eight), but this has to be weighed up with its security…although in my experience most leaders have so little faith in their belayers when carrying out a dynamic belay that they tend not to fall off!

One of the most important points to get across is that if you’re getting good runners then you should be getting good belays. Many climbers are complacent when it comes to winter belays, often taking the easy option in believing that when people tell them that X route has crap belays then they accept only crap belays exist, often clipping into and trusting the fixed mank even when there’s bomber runners right under their noses! Many trade routes did have poor belays in the past, depending on perhaps one or two fixed pegs (that’s now rusty and bent), but that was back in the day when climbers didn’t have cams, small wires and good screws! Don’t accept any crap belay until you’ve exhausted every last option. Think out of the box and look for belay points in places beyond your line of sight. Often you can find good cracks a little higher or below the snow line. With longer ropes, you can also bypass poor belays, or climb up to better runners and string the whole thing together. Treat building a bomber belay as part of the joy of winter climber – so that maybe it’ll take some of the stress out of the day when your mate come hurtling down on top of you!