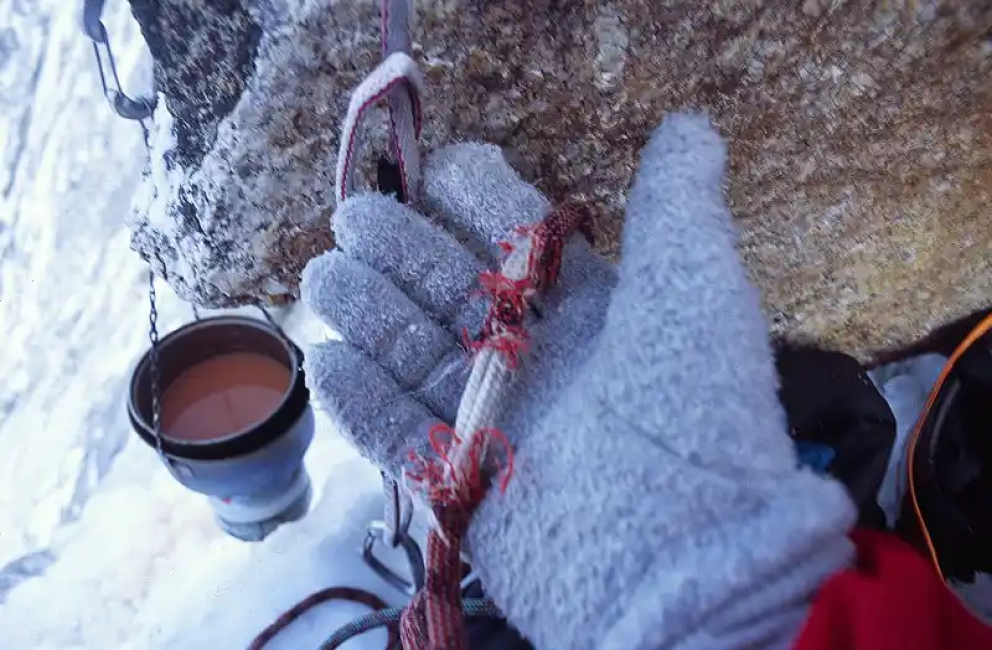 One of the big worries when descending loose ground is that the ropes may get damaged, stranding you there. Firstly if you’re concerned about loose rock then abseil with the ropes in a rucksack or sling so as to reduce the chances of the leader kicking rocks down onto them as they descent.

If the only damage is to the sheath of the rope, caused by abrasion, then this should be patched to stop the wear becoming a full depth hole, exposing the core to damage. This is done by tightly rapping tape around the damaged section. Zinc-oxide tape (finger tape) works well for this task as its thin and flexible enough to pass easily through a belay device. Ducke tape can also work, but due to it being bulkier it may need to be fed through the belay device.

When abseiling on a damaged sheath you may find that the sheath snaps, and slides down the slick core as you go until it bunches up. If this happens it’s vital that the exposed core is covered, or else it will act like a dozen tiny hang up loops. The only option is to by pass the missing sheath by tying an overhand knot or double fishermans, so as to restore the rope to full strength. Once you’ve done this can can only use this rope to pull down the good one (see Raping on a trail lines and skinny ropes). If the damage is very bad, or the rope totally cut, then bypassed these areas cutting out the damage and tying the halves together via an overhand knot, so that the damaged section is isolated in the bight of rope.

If both ropes are so damaged that you need to tie knots in them then you’re pretty stuffed. The only option is to use the longest section of undamaged rope as your abseil rope, using a patched up section to pull it down.