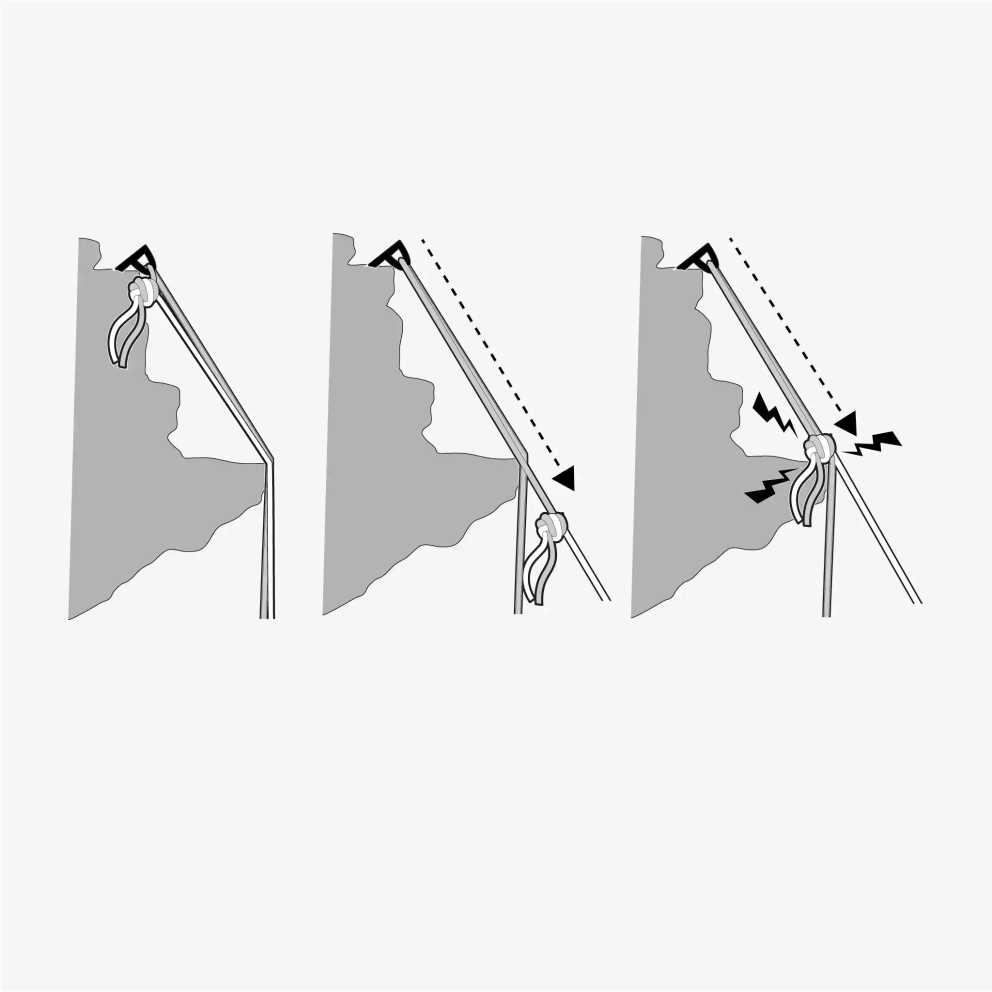 As in all decent, there are many demons out to get you, but number one when pulling the rope is friction. The more directly inline you are to the anchor the lower the friction and the easier the pull, often meaning the further out from the climb you can get the easier the pull becomes. Doing so also allows you to both see what’s going on above and flick the rope if it’s sneaking towards danger spots. The second demon is forgetting to untie the stopper knot at the end of the rope!

To begin with, most climbers will feed the pulling rope end through the anchor so that it will be already threaded by the time the other end rattles down. When doing this it’s usually for one climber to pull the rope while another feeds it through the anchor point and either stack it at their feet ready for casting down the pitch, or simply lowers it down the next pitch. When pulling the rope do so in a nice slow and controlled manner, feeling as you do so how well the rope is running through the anchor above. You should have already carried out a test pull earlier so there shouldn’t be any problems initially. Watch for when the weight of rope pulled through is great enough to pull the rest of the rope through. At this point increase the speed so that rope cannot pile up above you, and ideally, you should have the rope that has already passed through pulling the rope down cleanly. Sometimes it’s worth whipping the rope out from the wall as its momentum builds so that the end shoots out from the anchor and down the wall. What you don’t want is the rope sluggishly snaking down the wall and feeding itself to every nook and cranny. During this period be on the lookout for falling rocks from above. If this is a real possibility then consider sighting stances out of the ropes fall line, and if rocks do crash down then check the ropes for signs of damage before continuing. Once the ropes are all down you may either start down straight away if they look good, or pull them up to the stance, either to get them down more cleanly or to retie a stopper knot in the rope end that’s just come down.

Pulling ropes conventionally as above means that the pull rope changes at each belay, with say the yellow rope being the one to pull on all even belays, and the pink rope being used on all the odd ones. Although a simple concept this can prove hard to remember when tired, so it’s often worth making one rope the pull rope and either passing the knot through the anchor at each stance or retying the not (remember to clip the rope in while doing so). This is very simply done when using the overhand knot as it’s easy to untie – unlike the old double fisherman’s knot

If you’re faced with a hard pull over an edge, with the rope being run over an acute angle, or have stiffly frozen or wet ropes, then consider extending the anchor to alleviate the problem. Thick, wet or very long ropes can also be a cause of friction, especially when combined with complicated terrain that blocks the clean fall line of the rope. It may be necessary in these situations to sacrifice a karabiner or better still a rapid link in order to make the pull more manageable.

The first person down should always give the rope a test pull of one metre once they are ready for the second to follow. This tests that the friction is not too high and that they have identified the correct rope to pull. If any problems occur then the second can sort them out while still at the belay. This invaluable technique also gives another signal that the leader is down and that it’s safe to follow, and as such should only be done when that is the case: i.e. belay set, ropes attached and leader clipped in and ready.