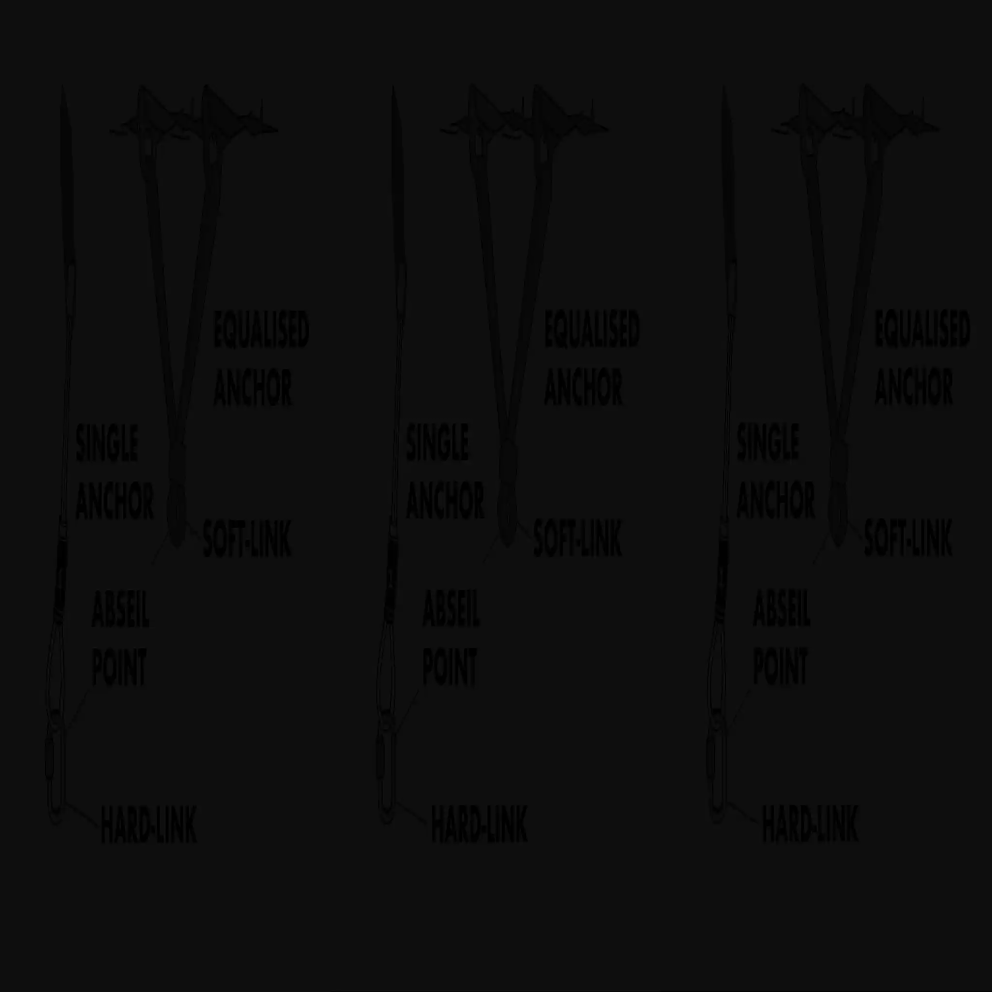 In extremis, people have abseiled off everything from shoelaces to frozen mars bars, but for those who are a little more prepared, it’s worth carrying a dedicated cord or tape to abseil from. In my opinion, the best material for abseil anchors is a 5 mm accessory cord. It’s cheap, light and strong (500kg unknotted) and can be tied more easily and securely than tape, either by a simple overhand knot (check) if in a hurry or more usually a double fisherman’s knot). Personally, I don’t like very thin tape as it is far less resistant to abrasion, dangerously so for some anchors, and can be more fiddly to tie.

On very long routes you may end up carrying tons of rap tat, which can easily become tangled when it comes to using it. One way to avoid this is to form it into a long rope chain. This is done by first tying a figure of eight in one end, and then taking a bite of the next section of cord, pass this through the eye of the figure of eight in order to form a second eye, through which the next section of cord passes, and so on. Eventually, you will have a chain of loops, with the end tied off with an overhand knot. When you need some cord just untie the overhand knot and pull, and the cord will slowly unravel loop by loop. The beauty of this system is that the chain can be stuffed into a pocket or the lid of a sack and pulled out as and when it’s needed.

How much to take?

For the unplanned retreat, you should already be carrying enough cord for four anchors in the form of your prussic loops, and this is a good reason to replace them when they become tatty, and twice that if you have a cordelette. You can increase the amount carried by using a full-strength cord as your chalk bag belt, in the lid of your rucksack, or as slings (using a thicker cord). If heading onto longer routes where a pack is carried then take a dedicated length of cord with you (5 to 20 metres) in the top pocket. If you’re not taking a pack then just rap some cords around your waist a few times. In retreat put the cord in your pocket, pulling out the right length at each stance and cut it. Try to maximise the cord you have available and work on one metre of cord per abseil, as although some may require more others will require much less such as nuts or pegs. If you run out of cord then you’re going to have to use up your slings. After this, all that’s left apart from your shoelaces is your rope itself! Tie the cord with either a double fisherman’s knot or a faster overhand knot, making sure you leave plenty of tail.

If you know you will be retreating via abseil, and know that you will need a lot of abseil tat, perhaps on a big ice route on which you will descent via Abalacov threads then here is a good way to get a little more out of your tat. Instead of carrying all the cord up on your back, meaning it isn’t doing anything until you head down, carry a thicker cord (7mm or 8mm) and use it as slings, or doubled up as extenders. Another good tip is to tie a large loop of abseil cord through your rucksacks haul loop, giving you something to clip it in with at anchors. When it comes to going down simply use these ready-made slings.

Designed to reduce rope drag when pulling down your ropes, circular rap rings have been around for several years, and although effective is best employed when equipping descents. A better option is the steel or alloy rapid link, as these are cheap, lightweight and strong, and best of all can be used for other purposes, such as clipping into damaged pegs and other fixed gear when a karabiner wouldn’t fit. A more expensive option than the two above is to leave behind a karabiner, and so it’s often worth always having a few old sacrificial krabs at hand just in case.