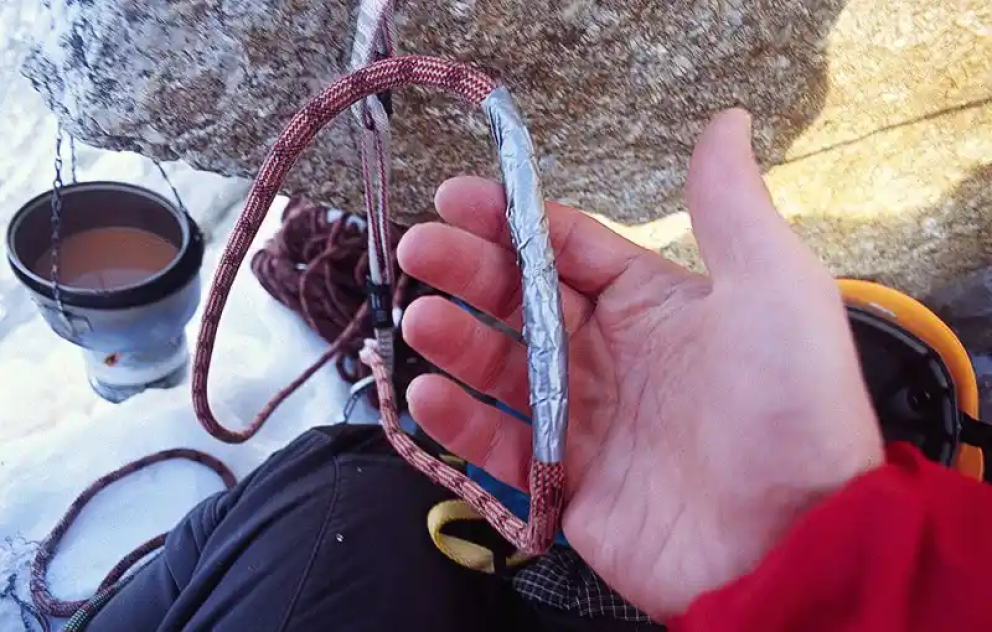 The first sign of a stuck rope is that the rope won’t pull at all. This should be found out by the leader when they carry out their test pull so it shouldn’t be a problem. If this is the case then the most obvious cause is that you’re pulling the wrong rope. If this doesn’t make a difference then there is too much friction. Are the ropes twisted? If you’ve been paying attention then they shouldn’t be! Don’t despair in either case; increasing your pull on the rope should sort this out as once it starts moving it will only get better. If the ropes are wet they may also bind with the anchor making it harder to pull. If the rope still won’t move then the second may need to extend the anchor and add a karabiner to lower the friction, and if this doesn’t work, and you suspect that there is too much friction between you the second may need to abseil half way down and build an intermediate anchor. To do this they may need to haul up the appropriate gear from the leader below. When applying the initial pull you may have to apply a very large force to get moving, especially with a wet rope, and this is best done by using an ascender or auto-locking magic tube to increase the load until the rope begins to move, at which point things will get easier. The second problem area is that as the middle knot descends it becomes jammed. If you feel the force required suddenly increase do not pull harder. Doing so may weld the knot into whatever it’s jammed in. Instead, flick and whip the rope with all your energy until you can pull the rope down easily again. If you still have the other end of the rope then you can also try reversing the knot out and pulling it at a different angle.

The last danger area is that the rope pulls but as the ends fall they get rapped and hung up of obstructions. Again if this happens don’t yard on the rope just yet. Flick the rope off any obstructions.

If none of these light techniques helps to get your stuck rope moving then it’s time to increase the force.

With your rope seemingly stuck you have two options, either return up the rope or turn up the pull force in the hope of breaking its bond.

Before you ever commit to returning up the rope you should apply maximum force to the rope. This not only gives you the chance to dislodge the rope without having to expose yourself to a scary jumar but also makes sure that the rope is well and truly jammed, a nice thing to know when you are jumaring up said rope!

To begin with, you’ll need a prussic loop, or better still an ascender. Staying clipped into the belay, clip the ascender/prussic onto the pull rope and begin taking in until the rope is tight. Keep taking in, bouncing on the rope until you can’t take in any more. If that doesn’t budge it have your partner add their weight. Once you’ve both jumped up and down you should be confident that the rope will hold at least one of you if you’re forced to jug up it.

When applying this force be aware that you may pull down a block on your head. Good observation of the ground above while descending should give you a clue were the ropes hung up and if this is a possibility.

If the rope still won’t budge but you’re not able or prepared to jug back up then you’ll be forced to cut the rope and abseil down on what you have.

Returning back up a your rope

So your rope is completely jammed above you – the ground still a long way away. You’ve tried just about everything to get it down, pulling on it, pulling on it harder, setting up a haul system, cried, but nothing’s worked. It’s time to think the unthinkable – one of you must go back up the rope.

Firstly this should be your last option, and should only be attempted after you have applied a great deal of force to the rope, thereby tested it. This means that you should be as confident as can be that the rope will hold your weight, as it has already held a substantial load in your attempt to free it.

Start by making sure the belay is as bombproof as possible, just in case, turning the anchor from a bare-bones rappel anchor to a solid climbing anchor suitable for an upward and downward pull, and it’s imperative in every stage of returning up the rope that you try to maximise any protection possibilities open to you. This means placing gear whenever possible, backing your self up if you can and thinking through every possible scenario.

The most import safeguard is that since the two ropes you have formed a discontinued loop, and you started with both ends, this means one end should always be within reach of the other. By tying into the free unstuck rope end you should be able to safeguard yourself when trying to reach the other end, being belayed by your partner and placing protection on this emergency lead line.

The ground above doesn’t look too difficult and it appears possible to free climb. Tie into the free end of the rope you have and free climb back up, placing protection as you go. If the terrain isn’t as easy as it looked then use the stuck rope as an aid by yarding upon it with your hands, using it mainly for balance and the odd hard pull. You can also use the jammed rope as protection as you ascend, sliding a prussic loop up it as you climb.

If the ground is too hard to free climb back up, then you’ll have to jumar up the stuck rope. To do this tie into the end of the free rope and take the rack with you so you can place protection.

As you return up the jammed rope it’s important that you don’t bounce around as you re-ascend, both to limit wear on the rope if it’s running over edges, and to keep the load to a minimum (you don’t want the rope to come unstuck just yet!). Using prussic loops doesn’t make this action easy, being slow, scary and generally jerky. Mini and standard mechanical ascenders make the job a great deal faster and easier, and it’s highly recommended to take a set along on the bigger routes.

If using mechanical ascenders and the rope releases while you’re ascending your only chance comes from being tied into the emergency rope (even if you haven’t been able to place any protection), as the ascenders will slide straight off the end of the rope once as they will only lock in one direction. If you’re using prussic loops there is a slight chance that the prussic may lock when inverted, although there is a greater chance they’ll just slip and melt off the rope! So to stay alive, you must trust your life to more than the faith you have in the rope not coming unstuck!

The worst-case scenario is when you don’t have any spare rope with which to be belayed, yet you must still return up the rope. If the rope comes unstuck you’re probably a goner. The only way to maximise your chances is to tie into the rope as you ascend and place gear so that you are self belaying yourself. The best way to do this is to use a running knot such as a clove hitch, loosening and retightening as you proceed. The rope should be tied to the belay, and the belay made as strong as possible as the fall factors involved could be considerable. As you ascend you would move the knot along with you, placing gear as you go if at all possible, even if it’s only one piece, to keep the fall factor low. Taking these precautions makes the operation slower than just blindly yarding on up the rope, but the chances it gives you may be well worth the effort!