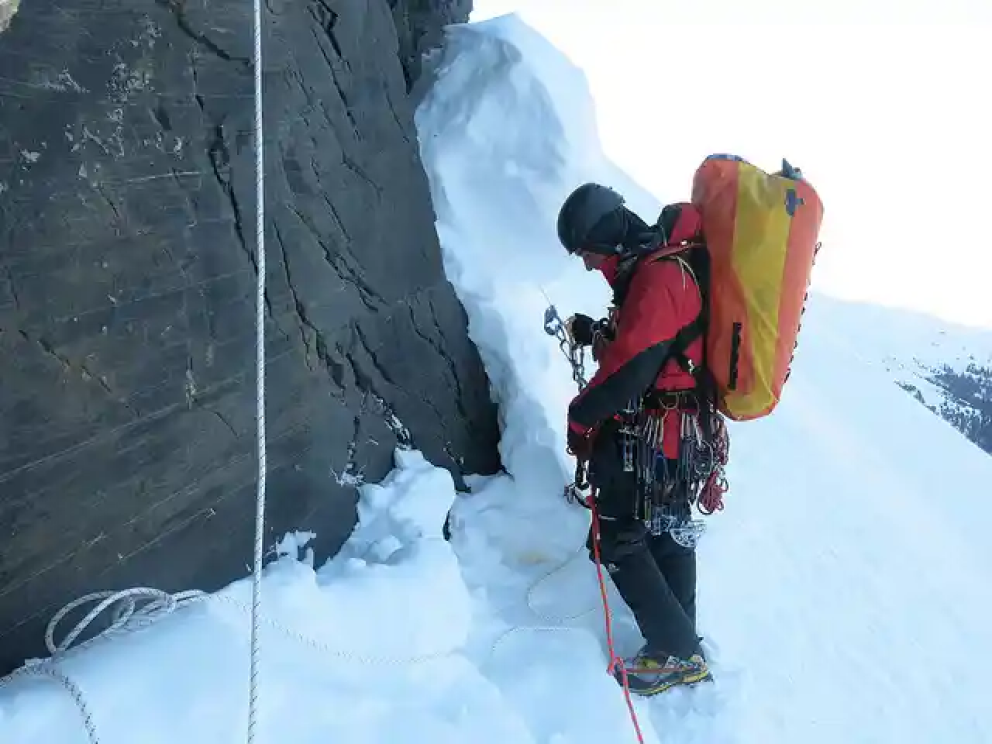 There are many situations where you could be forced to belay without a belay device; the most obvious one being that you’ve dropped it – a common thing to happen on multi-pitch climbs, especially if you add in thick gloves, bad weather and a tendency to be a clumsy idiot. Another common situation comes when winter or alpine climbing, where having the ability to begin belaying swiftly, without all that fannying around with threading ropes and screwing up karabiners can pay when you’re up against the clock, or when your ropes are stiff and swollen, making your belay plate inoperative. It’s at these times that you need to fall back on some old school pre belay device techniques, namely the body belay and the Munter (Italian) hitch. Although old school these techniques are highly sophisticated in their own way and are far less forgiven than a belay plate, meaning it’s vital that you understand how they work.

The body belay is the easiest technique to do in the book, just stick the rope around your waist and hold it like those climbers do in those old black and white pictures right? Well unfortunately the body belay can very easily give you a false sense of security, having the holding power of a banana if done incorrectly.

The basics - Belaying the second

The integrity of the body belay depends on the quality of your stance, as having a solid stance allows you to gain control over the rope. This means a solid sitting position, where you can brace yourself, or as good a standing position as you can achieve. The reason for this is that this technique relies on the stability of your body, literally coming apart if your body buckles. It is often advisable to go for a rear belay point to avoid twisting, making the attachment point between you and the belay on the rear of your harness (make sure you’re clipped into the belt or full-strength haul loop!). To belay, take the rope(s) and pass it around your waist, with the live rope going as directly from the point of loading to the anchor (not necessary with a rear belay point). This is vital as having the rope on the wrong side could result in the belayer being spun around so that the rope was no longer wrapped around the waist – with the ideal scenario being that a loaded rope will be forced to rap around your more. The rope is passed around the locking arm in such as way that it can be used to increase friction in a fall, while still allowing the rope to be taken in. Take the rope in by pulling with both hands (one pulling the rope up and the other pulling it around your body), making sure you never let go of the rope with either hand. To brake move the breaking hand across your body so as to increase friction on the rope. If you’ve been careful to avoid slack in the system then this should work easily, but it will slip if you get a bigger shock loading until the load has settled down.

If you’re unable to get the rope to load directly to the belay, say you’re belayed in a position where you can’t create a direct load to the belay, then you can clip the live rope through a karabiner clipped to your belay loop, thereby creating a directional anchor point. This will make smooth taking in slightly harder (as it now has to pass through the krab), but does afford more security, and is probably advisable to anyone unused to this type of belaying.

Belaying with double ropes makes things harder and it’s best to treat both strands as one, taking them in at an equal speed and avoiding the temptation to take up slack on individual ropes. In my experience shoulder belays shouldn’t be trusted as they can be dangerously unstable (but fine as long as no one falls off!).

How good is this type of belay? Well using the assisted version with the directional krab I once held two seconds who fell of at the same time (off Fallout corner!), and although I was defiantly keen for them to get their lardy asses off the rope, I did hold them (I’d left them attached to my magic plate and forgotten to take one of theirs – a mistake I won’t make again!).

When it comes to belaying the leader, well you’ll need gloves and preferably a partner who has no intention of falling off – meaning this is a good technique for winter belays on easy routes. In a low angle fall where the force will be low, it should be possible to get this technique to work by most climbers – but it’s important that you expect some slipping in the system and don’t panic when it happens (and let go!). For a more modern type of fall, I think chances are low unless you’ve actually gone out and practised catching falls with a dead weight, which is what climbers used to do, but I expect when it comes down to having to use it most climbers won’t have tried it before. If you do follow the same technique as above, then consider adding the directional Krab to avoid having the rope wiped out of your hands. One advantage is that this type of belay is very dynamic – meaning if the gear’s crap you will increase your chances, but if you fall straight onto the belayer don’t expect a miracle and remember not to try it with bare hands, and the best option - unless the ground is very low angled - is to use a munter hitch instead.