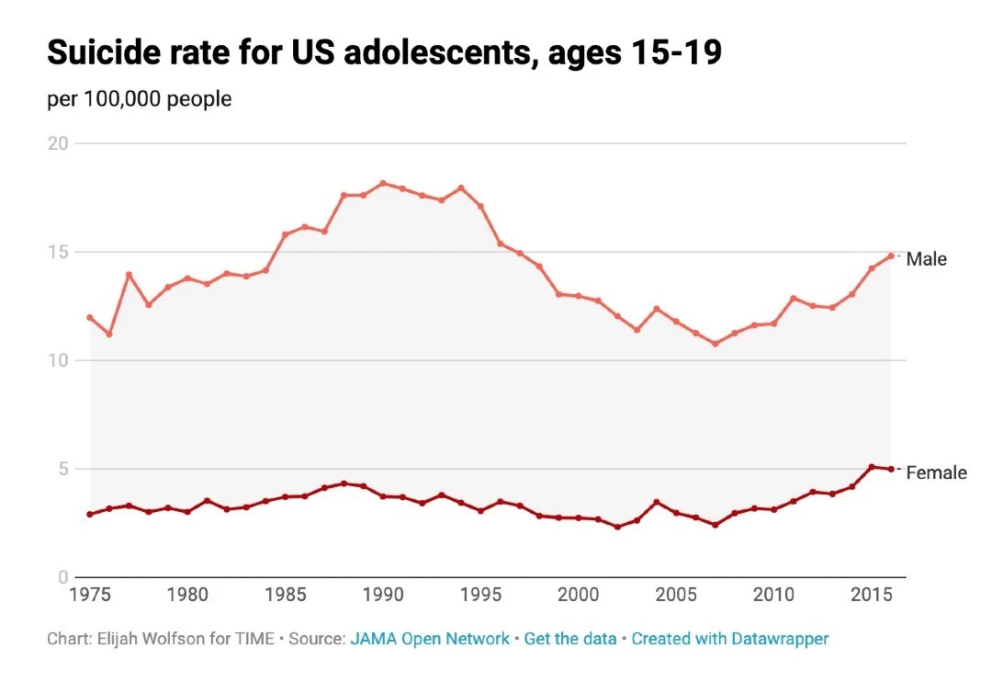 I heard a stat today that 7% of UK young people under 17 have tried to commit suicide, with 24% also having self-harmed. I don’t believe the suicide figure, especially when everyone bends over backwards to deny we have a suicide problem (which I think we have, even if it’s hidden because we’re afraid it’ll spread like fire). Still, even if it’s only 0.1%, that should ring every alarm bell. Where I live, someone seems to jump in the river and drown every week, and no one ever seems to add up the bodies, but if you live in the UK, was this 7% a headline in every newspaper and website? Was it the top story on the BBC? I suspect not.

The impression you get if you dig for the story, which is not as easy as you’d imagine, gives the impression the issue is with “women and sexual minorities” and that the rise in suicide amongst girls is the issue; yes, it is increasing, but it has a long way to go to match the problem with boys, which is the issue: boys and young men killing themselves (75% of adult suicides are men). I can’t help but feel such stats are not about compassion or alarm bells, but just politics (perhaps boys kill themselves due to viewing themselves as - well - non-essential).

But in my searching, I also found out that Japan has had 479 child suicides in the last year, including 14 primary school children, again, the majority being boys, and if I’d gone further, looking at the US, as well as the expansion of psychiatric drugs to kids, well, I’d probably consider doing myself in. But think about this. How is it that people who think of themselves as good, good and compassionate, who can become so outraged about ‘kids in cages’, can yet condemn kids to a year in isolation, in suspended animation, and cheer that the schools are closed, the park cordoned off, the swings locked up?

Do you remember how long an hour could last as a child in a car when you count down the seconds until you got to the final destination? How about a year trapped in your bedroom, trapped in your head, with your childish fears, your parent’s fears as well. What if you count and count, down and down, but lose all hope, or even the memory, of where it was you had been going?