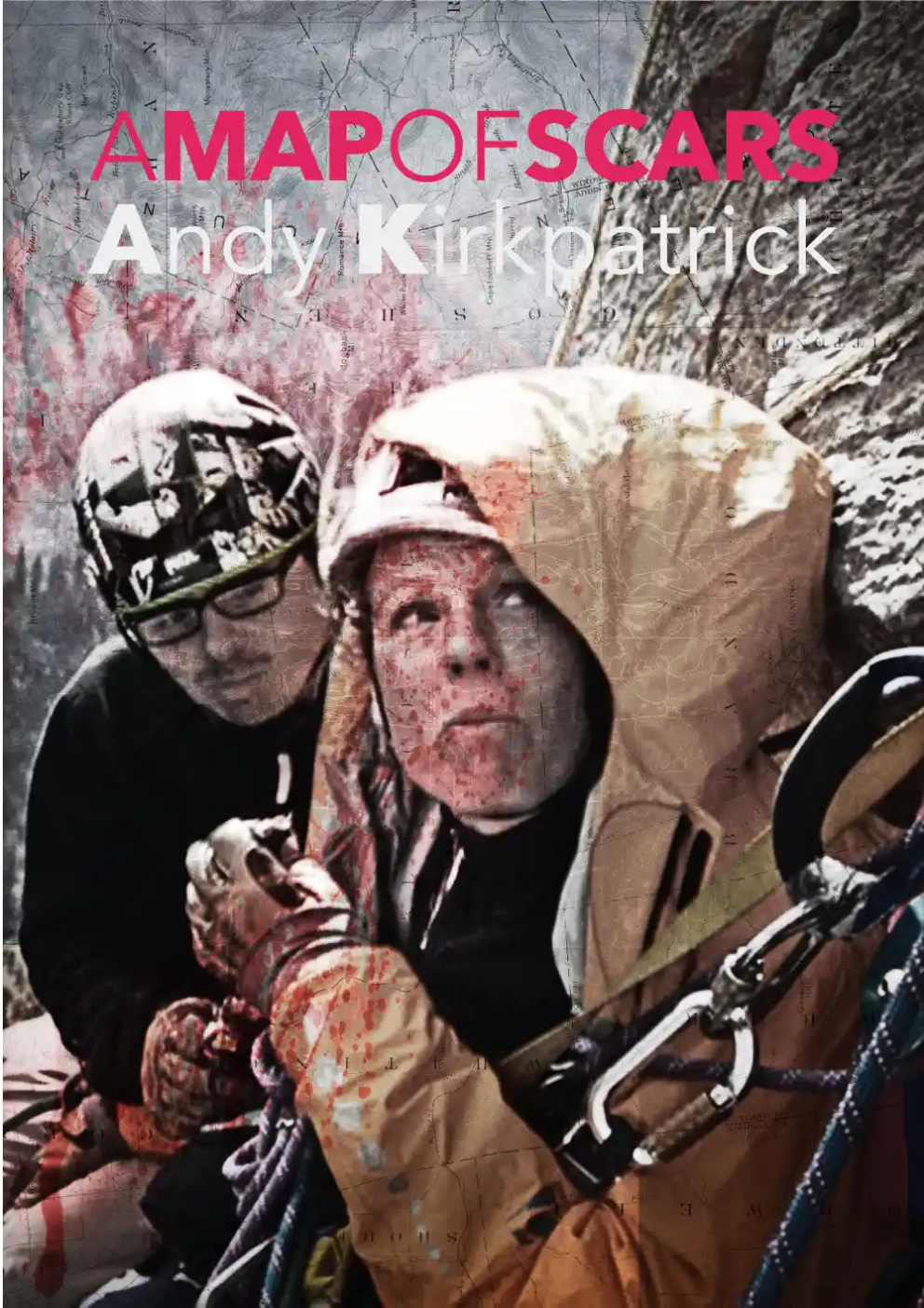 A Map Of Scars

I’ve been working on my book A Map of Scars over the last few months, trying to pull together a ton of material, the aim to produce a kind of climbing book that’s not been seen before, maybe not seen in any book on sport.  The original idea for the book came about in 2006, sitting on a portaledge, in love, climbing El Cap, the idea of the wall being full of scars, but also the people in my life, my partner at the time covered in them, each telling a story - each beautiful in their own way.  It was going to be a love story, covering the period from where Cold Wars finished, quite a short period, covering trips to Alaska, Greenland and El Cap, but also the break up of a long marriage, dealing with big changes in my life, even dealing with success.  I always intended to finish off a trilogy of books.

If Psychovertical was about the question ‘why?’, Cold Wars the question ‘What is the cost?’, then Scars was going to be ‘What next?’, the age-old question all climbers like me are asked.  Looking back, ten years on, I’m glad the book never got started as I think it would have been a story I’d not be able to stand by now, not like Psychovertical and Cold Wars, which I feel are true to the writer then.  When you’re wrapped up in a new relationship you are always a little blinded at first and so that may have overly sweetened the story when the story is not one that could or should be sweet, only a nod given to what lay beneath. It would have been rose-tinted, more a Hollywood version than the darker book it is set to be, no not Hollywood, but a made for TV movie.  It would have been dishonest.

The primary focus of the book is still the idea of scars, the scars we carry on our bodies, in our minds, and inflict on our own and others lives, the book itself a kind of deep scar.  At the core of the story is also the impact of obsession, which seems to have become an obsession in itself, as well as the debt we owe to people, to acknowledge the price they have paid for what we desire.  I think myself supremely lucky to have both been the unthinking self-obsessed asshole that inflicted pain on others through my meaningless obsessions (when set beside love, family and security), and I also feel I was betrayed in the same way, giving me a unique perfective as perpetrator and victim.  This is a dark strand through a story that I hope will actually be more upbeat than Cold Wars, funnier, with more colour and a greater sense of landscape (both exterior and interior), the story full of climbing and adventures from Patagonia and Alaska to Greenland, Norway and Antarctica.

At the moment I’m moving away from a straight narrative and using a more mixed media approach, using traditional pieces of original writing, plus blog posts, poems, tweets (I want people to find fragments in the book, such as important tweets), emails to and from people, letters and texts, the idea to create map of a person’s life,  a book with real depth, more a collage of thoughts and interactions, that tell the truth of one person’s experience - the most fully realised look into the head of a climber there has been.

One of the biggest hurdles for this book is how to deal with how other people’s lives intersect with mine, people whose lives are private - a big issue in Cold Wars (people said they had to check if people were still alive when reading what I’d written in Cold Wars).  In the past I’ve had to jump through many hoops when talking about third parties, so know pretty well what you can and cannot say about people, but it’s always tricky, as often the more honest you can be the more value it gives to your writing. For me, if you’re a public figure, talk and write about yourself, have a blog, make a living from a story then nothing is off-limits as long as it’s true and can be proved, but if you’re a ‘civilian’ then it’s a case of negotiation.  Often the people who wish to be left out because they feel they’re not important (as in Lesueur route chapter in Cold Wars where my partner didn’t want to be in the book, so I just never used his name) go on to be the strongest characters in the book, and perhaps it’s the strength of the writer to write the truth in such a way that people would like to be included.  Very often the key to this is to write like Hayao Miyazaki (Spirited Away, Princess Mononoke) and have no real baddies at all, only characters with competing motivations.

This book has got to have a mix of tastes, sweet, sour, savoury, a book that will make people think, cry, piss themselves laughing, ask questions and give answers, to confuse and make sense, a book that should be like a living breathing embodiment of the story.  Will I be able to pull it off?  I’m not sure, it’s by far the most ambitious project of my life.

As a taster here’s one of the fragments that appear in the book, describing an attempt to solo the Harlin on the Eiger

I build a belay for one in the icy mist of the Eiger; a peg, going in with a guilty ring; a brass nut; a pink tricam; all good for a force both up and down.  I check my work, another belay built, and think about that word force, a classroom term, a manual word, one that hides the truth.  I am that force that must be checked.

Get a grip, you won’t fall.

I scan the rock for anything I may have missed, one more anchor before I go. I’ve taken all it has to give.  The limestone scares me, it hasn’t the timelessness of granite, nor its security.  El Cap loves you, the Dru loves you, but the Eiger?  This rock is made from the dead and it shows; sullen, unhelpfull, jealous and unforgiving.

The Eiger neither loves or hates you - now get on with it.

I tie in the rope directly, feeling it already going a little stiff after two days of winter cold, then feed it into my rope bag, its hundred metres my insurance against not finding a safe harbour for a solo climber on a face sparse with anchors.  I consider what happens if it freezes, having only climbed a thousand feet, four thousand to go.  I’ve only done the easy climbing so far.

Easy but under a metre of powder - the real climbing starts now.

I consider the pitches that morning.  Steeper than I expected and very thin, scrappy, screwless, a seventy-metre fall snapping at my heels.  I doubt I’d ever been so gripped, sort of coming round after making it through and realising I had no idea what mountain I was on or even what country I was in; my concentration so complete.  That scared me.

It was hard but you did it, and you can do it again.

I think about the patch of faded red nylon I found wedged in the chimney below, wondering for a moment if it had been part of John Harlin’s suit, left behind and buried in the ice since his fall down this line.  I’d reached out to take it, only to be revolted at the very idea.  Either it was nothing and worthless, or it belonged to Harlin, so why would I want it?

It’s getting late - stop over thinking everything.

I put on my soloing device and clip it to my chest harness and check my rack; so much gear in order to have the few pieces that might just fit.  Then I grab my phone to check the weather. I know I’m stalling.  The weather is good and will stay that way.  I can’t resist a quick scan of my emails - I’m a junkie.  One is from my dad, questioning why I would want to try and solo the Harlin, telling me he thought I was past that kind of thing.  The other is from my son asking where I am.

I feel tears welling up.

You must finish what you’ve started.

Then I notice it; I’ve fed the rope through my belay device the wrong way round.  If I fell I wouldn’t stop, simply spin off the end of the rope.  I stand there for a moment and consider it.