I must be a nightmare for kit designers, men and woman I’ve been bumping heads with for decades now.  Most often than not a designer wants to flex their muscles, add some new-fangled idea, a wheel that’s more round, or is square so it doesn’t roll down hills, some game-changing idea that the world will flock to buy.  Being a designer in this day and age is tough, their bosses always pressing for something new.  Designers can also become a little trapped, like self-licking ice-cream’s, creating new stuff when the old stuff is better, unable to really just say ‘there you go - it’s perfect and cannot be improved on!’.  Do that and you’re out of a job.

Most designers are just that, designers: experts in fabrics, patterns, components, how things are cut and sewn, what can be done with current technology and what will sell.  Most sponsored climbers who work for companies are not designers (most think they are), they are tier one users.  They’ve never had to stand in a shop and convince a punter to buy a shell as lightweight (and as strong) as a condom.  They’ve never been a warehouse manager who needs to handle box’s of kit that isn’t being sold, or a rep trying to persuade a retailer to take day-glow yellow pants (which look good in the athlete’s photos, but less good on Keswick high street).  No, a climber knows what he wants, but in a selfish way, also unconcerned with longevity or value, after all, when his condom coat wears out he’ll just blag another.  Give most athletes what they want, who have no interest in bread and butter kit, and a company would soon go bust.

The best designers would be hardcore climbers, full-time designers, and with a ton of retail experience, but that’s a rare animal, so what we have collaboration (well in some brands).  The work I do for Montane is just that (what I’ve done in the past for companies like Patagonia, Berghaus, PHD, Crux and others), adding some extra input on designs, both as a climber who’s always been a gear freak, but also as a seller of gear (and even designer).  Most often than not though it seems like I’m there to shoot them down, pooh-pooh their ideas, make their jobs tougher than they already are.  Be a pain in the ass!

My problem though is that I hate clutter and faff and design for its own sake.  For me, it’s less, less, less.  For me, nothing’s perfect until you can’t take anything else away.  This of course is a pain in the ass for a designer, as I’m always asking ‘why?’ when I see some new-fangled strap, zip or lump of plastic.  I take an alpine approach and think that gear only has to meet you halfway (to promise more is bullshit anyway, such as in high tech back systems on 80-litre packs designed to carry themselves).  For me, the experience of how to use gear well (clothing, packs and equipment) and fitness (being able to carry big loads) makes up the rest.  A man who knows what he’s doing can work with gear from a charity shop, while a fool could be decked out by NASA and still die of hypothermia or blisters.

This problem with high ideas in design was demonstrated by the new body army designed for the British army, a news story I spotted last week.  Now I’m very interested in military kit as it has to perform the same kind of function as alpine/expedition kit, and tends to be designed along the same lines (tough, robust and functional).  And so I tend to keep an eye on what kits being introduced and what soldiers use (a good site in military Morons).  The trousers I designed with Montane this year (Psychovertical pants) where based current military trousers, the idea to make some ‘indestructible jeans’, for tough climbing (alpine, rock etc) (I also said they could not look like something Bear Grylls would wear).  Anyway, the army has started rolling out a new style of body armour, webbing and packs that have not been universally liked.  The gear is designed in Israel and made in China, but as soon as I looked at the video on their website and saw the ‘dynamic weight distribution (DWD) system’, a piece of plastic designed to spread the load to the belt, I knew it could be a disaster.  It looked like something a design student had come up with for their MA, having never been in a war, carried a massive hundred-pound pack, or had the same ability to break stuff as the Hulk.  When you’ve been around kit so long you see the same ideas again and again.  All over the gear, there seemed to be stuff that designers would have thought up, old Petzl style helmet straps with wheels, three ways to tighten a belt one-handed instead of one buckle, quick release catches so you could drop it all in a second (with a handy remote cord attached to the back).  I could just imagine the designers getting together with a bunch of soldier and them being told ‘make it simple and make it lighter).  The new gear is lighter but only due to improvements in body armour plating, not the webbing itself.  The reason for this resigned is as much to do with simply reducing the load on soldiers, as an increasing trend for soldiers to be less fit than they used to be.  The introduction of women into full combat roles (the lighter you are the harder it is to carry crap) also means gear has to get lighter. And so looking at the forums and talking to a few people who’ve used the gear it seems it’s been a kit designer gang bang, no doubt leading to more cost, and more people buying gear off the shelf that works (usually due to be simple and just well made).

And so two years ago I sat down with the design team and they asked me about packs, probably hoping I’d have some exoskeleton design in mind, or one were it had four shoulder straps, or a Sherpa head strap system (SHSS) or some something.  Instead, I ask for something impossible.  I said that you can get tough rucksacks, and you can get featherweight rucksacks, but you can’t get any featherweight tough rucksacks, and that’s what I wanted! 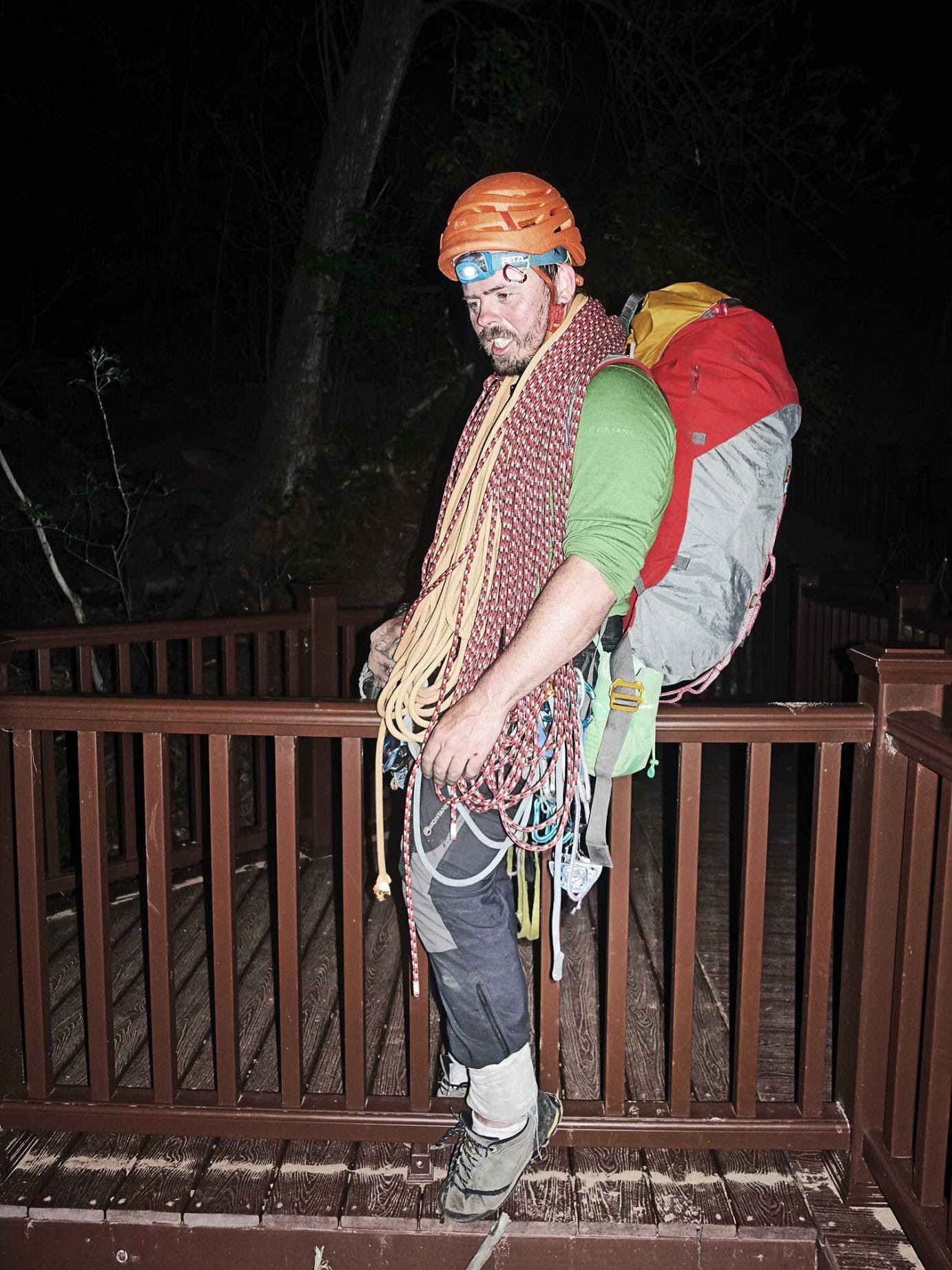 What I asked for was a pack that featured heavy-duty material, not haulable, but able to deal with friction and abuse. I wanted it to be around 40 litres with 10 litres extension, and weigh around 500 grams.  Feature-wise I wanted it to be haulable if need be (haul loop on front and back), and work with both straps (removable so you could fit your own longer ones) and bungee.  Forget fancy axe carry systems, as axes would be slipped into the side straps or bungee loops.  I also wanted it to be highly compressible, so it could fit inside a second sack after you’ve approached the route, or when carried in an expedition sack.  This mean I didn’t want foam in the back, the idea people would slide a sheet of foam inside if the needed it.  Lastly, it need a basic webbing belt (no padding), and all buckles needed to be metal so they could not break, with the most important one being the hip buckle (this had to be low profile too so it didn’t catch when climbing). And that was about it, well apart from that - although niche - it has to be affordable, so no getting the weight down by using Dyneema or Spectra or any other billionaire materials.

Six months later I got my prototype, now named the Ultra Alpine, pretty much what I’d asked for (my design had a drawcord lid, while this has a roll style top).  The sack ended up weighing 610 grams (so lighter than a classic KIMM sack), is 38 litres (+5) (sized for UK cragging, winter and alpine climbing) and is made from a mixture of super-tough VX fabric (wear side) and 420 Nylon on the body.  I used that prototype for over a year, in France, Italy, US, Norway and the UK, on rock, ice and alpine rock routes.  It went up El Cap three times, has been hauled, abused, and carried loads from only a few kilos, to seriously heavy (big wall rack).

So is it any good?  No, not if you’re looking for all the normal stuff: straps, padding, a solid back system (the Fast Alpine is the pack is the fully-featured Montane alpine/rock/ice pack).  For most users, this is 100% not the pack for them.  It’s highly specialised and niche, a real climbers pack, designed for long alpine climbs mainly, where the user understands why it is the way it is.  When people say ‘Oh it’s not very comfy unless you pack it right’ my answer is ‘it’s not an IKEA carrier bag, pack it right’.  When someone tells me it packs down to nothing in a mates sack when the leader’s climbing sackless but would like foam in the back like a normal pack, I tell him if you do that it’ll pack like any other rucksack, not a bag with straps on it (which is what it is).  On my pack I’ve got a foam belay seat I shove in the back when I need it, and just pull it out when I don’t.  If I need to fit gear on the outside I use a combination of straps and bungee cord (the straps can go on the side or main panel).

Price-wise the pack came out at around £150, so although not cheap it is a mass market for such a niche product (using VX fabric pushes up the price, but it’s a good investment).

This probably sounds like an advert for the Ultra Alpine, but it’s not, in fact I know it’s not a sack for 90% of this site’s visitors.  What it is, is an honest look at how products get made… or don’t.

A Snickers bar costs 60p. Were these words worth as much?

When to shit your pants