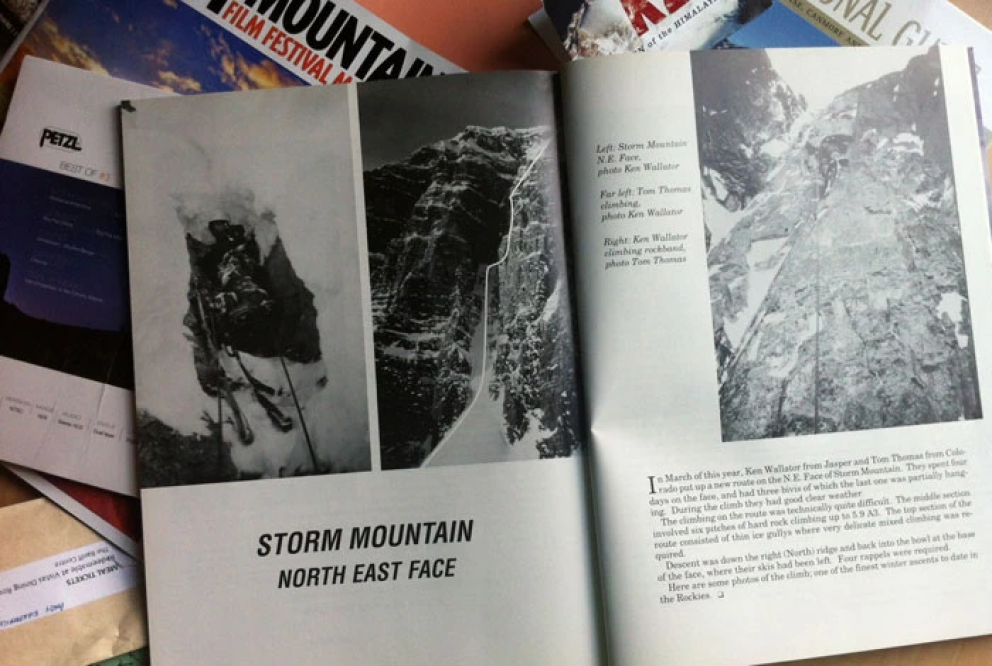 When I was 19 I found a copy of a magazine called Alpinism in a second hand book shop in Matlock.  It was put together by Chic Scott, who’s probably known best for being the closest thing to Dougal Haston’s best friend, as well as working on the Eiger Sanction and being a Candian climbing legend.

Issue number one of Alpinism is probably the least known climbing magazine ever produced, while at the same time having by far the greatest list of contributors in one issue of a climbing mag ever!  In the pages of Alpinism are stories by Greg Child, Jim Bridwell, Marc Twight, Voytek Kurtyka, Barry Blanchard, Ward Robinson and Ken Wallator.  I can’t think of any magazine - even Alpinist - that features so many legends in one place.

The effect of reading Alpinism, a magazine I read so many times that it eventually fell to pieces, was profound, and many of the climbs I did in the next twenty years, as well as the writing and photography that stemmed from those climbs, is foreshadowed by the routes in those pages.  Many are in winter, all are committing, and each one is described in a matter of fact way that produces stories that are surprising, funny, sad and unexpected.

The sad thing about Alpinism is that there only ever was one issue, printed in 1988, Chic never made enough money to print issue 2.

I ran into Chic in Banff this weekend and told him what an effect the mag had had on me, and that my copy had long since fallen apart.  “Here you go then lad” said Chic, pulling out a brand new copy from a box of his books, “I’ve got a few boxes left”.  I opened it up and was immediately transported back twenty years, looking at those familiar black and white pictures of Bridwell near the summit of Cerro Stanhart, Voytek aiding up on Trango Tower, Dave Cheesmond smiling from a tent door.  (if you want to buy a copy then chic has them on his site for $10, just scroll down on this page).

We got talking about the magazine and about publishing, and how we were cut from the same cloth, namely wanting to do cool things in print, without considering the economic realities of such things (like writing and illustrating a book on pegs!).  And so true to form I said “Why don’t we work on Alpinism issue two?” joking that instead of monthly, bi-monthly or annually, Alpinism could be a bi-decadly publication!

I published my first book this year (editing, designing and bullying the author) as AKreative (if you read the intro to what it does then the word ‘pubisher’ is probably but too grand a word), in the form of Karen Darke’s second book Boundless.  It was great to see the process through from idea, to design to print (and sales!), and the idea of doing a one off b-decadly mag is just the sort of stupid, pointless and awesomely economically stupid mission that gets me out of bed in the morning.

And so the plan is to produce alpinism issue 2, probably both as a digital book (we may add movie and audio for tech savy dirt bags!) as well as a hardcopy, probably funded (we won’t have adverts) via Kickstarter.  Chic wants to keep with the original ethos of alpinism, and keep it gritty and raw (which should not be confused with ‘being rubbish’).