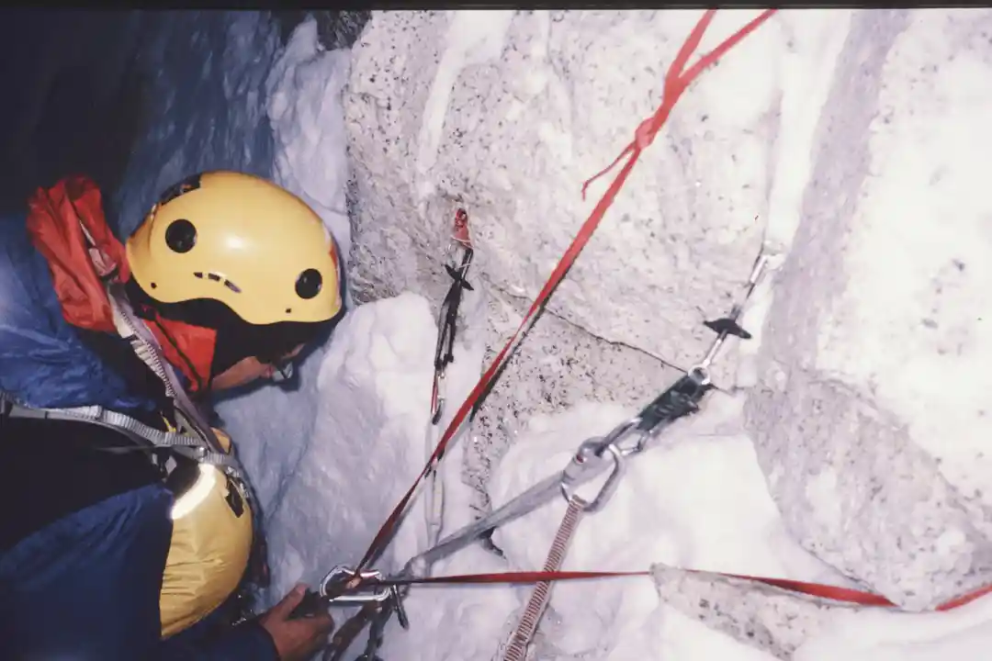 While searching through my photos, looking for abseiling images, it struck me that four Winter trips to Patagonia was where I’d really learnt how to get down of mountains in one piece (often when I had no pieces left once I was down). This image is of Ian Parnell on the way back down from the first winter ascent of the Parkin route on the East Face of Mermoz, showing the rappel anchor (10mm Troll rappel tape), and the back-up anchor (2 cams) that the last person down would clean.

We both used abseil lanyards (daisy chains) and Prusik loops, and although I’d not slept for two days (I thought I was going to die of hypothermia the night before, and had spent the night crouched in a ball), we took most of the night to get down to the glacier, and cross it safely back to our snow hole.

I think I once calculated I’d rappelled about 4 kilometres in Patagonia, and so it’s no surprise I really got into SOPs and protocols, understanding that cutting corners, or rolling the dice “just this once”, was eventually going to get me and my partners killed (you need to save those dice for when you’ve only got those dice to roll). So it’s funny to think about this non-picture, which has no action in it at all, the kind of picture you’d never take back then when you only had 36 images on a roll of film.

Why did I take it? What it tells me is that even when I was tired and cold and strung out, what I was photographing was the process, not the action, the glue that holds the thing together, not the thing itself. I took the time and that frame of film to acknowledge the little things, often overlooked, the investments in time a climber has to make in order to lay in bed - twenty years later - and look at old images like this.