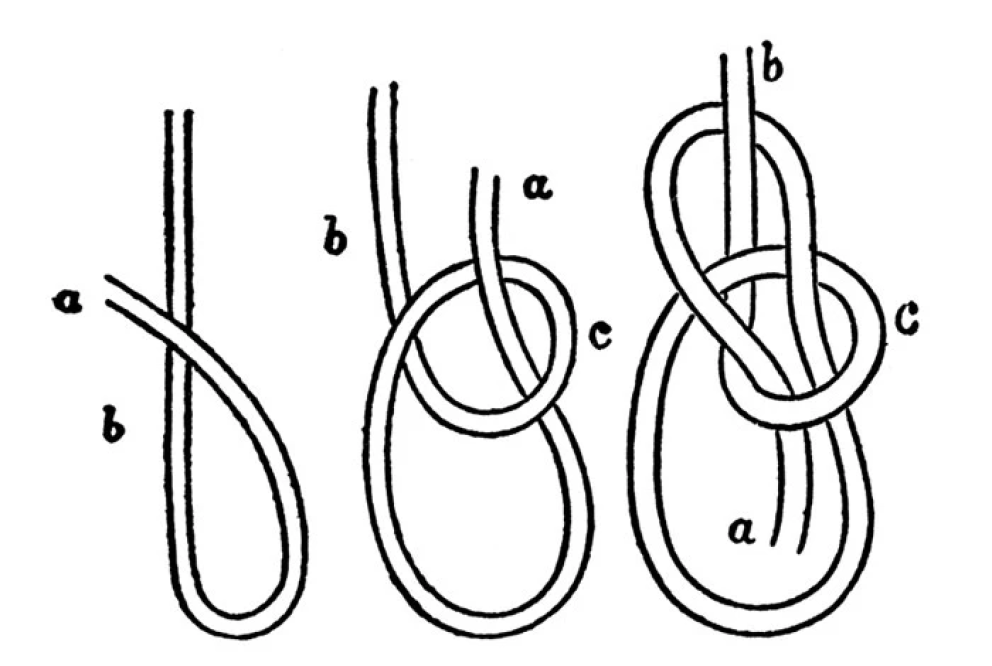 There’s been a lot written recently about how we may see the banning of the bowline from UK climbing walls (many walls already have a bowline ban internationally). This has been prompted by the death of a climber due to the apparent failure of his bowline, a failure that to me doesn’t sound that uncommon (user error).

I’ve never been a huge bowline fan, and I think it’s a knot you have to start with for it to become your number one. I also can’t help remember the story of a Brit bridging up the fearsome Ear pitch on the salathe when his bowline came undone, the rope slipping back to the belay.

Of course, the idea of a ban on a much-loved knot has led to the gnashing of teeth and claims of ‘dumbing down’ and over officious HES, with UKC forums full of outrage, and the usual climbing wall manager/floor walker bashing (generally by feckless, uninformed tight-fisted climbers who are a hazard to us all, or grumpy old climbers who don’t even go down the wall).

To be honest, I’m always a bit dumbfounded by the cries of such people, and here’s why.

First off the majority of climbing walls only just scrape by financially, and even when it’s full to bursting, just think how long it’s open, the staff, the heating, the bills, the route setting, the extensions, not to mention insurance. Add to this the fact that for many climbing walls business is very seasonal, so the good nights when the wall is rocking must support all those summer nights when it’s empty.  I expect for the majority of small wall owner it’s just a living - not a business ( the growth of the tiny ‘boutique climbing wall’  even more so).

What this means is that, unlike a business that has a huge profit and so can absorb the cost and impact of litigation and hassle, climbing walls can’t. They are also legally responsible for you the user, and so must do everything in their power to monitor, teach and hassle users to stick to the rules.  If they really fuck up people could go to jail.

I’m sure every wall would love to give all ‘proper’ climbers a yellow T-shirt with “do what they will” printed on it, allowing the ‘experienced’ to be left to do body belays and tie in with a double fisherman’s knot.  This would leave them free to keep an eye (and coach for free) the novice and the clueless. But you know what, I guarantee the number of accidents would rise and almost all would be wearing yellow t-shirts.  Unlike the real outdoors the climbing wall is a real high-risk environment by the very nature of it seeming like a low risk one. Bolts, lower off, matts and plenty of banter have no effect on gravity - as many have found to their cost. Queues, running around doing routes and getting the most out of your training, along with lots of ‘chat’ makes it the ideal place to fuck up (i guarantee you take more care at the crag).

There’s also something odd and very climber oriented here in that as climbers we seem to hate any commercial climbing business, and feel our love of climbing shouldn’t be exploited (the same goes for things like Kendal film festival which is another climbing business that makes almost zero profit). The thing is that walls are there to make as much money as possible - as much as the market will allow. They’re not a social club. We take them for granted and many give them a hard time. How about if walls acted like swimming pools or normal leisure centres and made you pay by the hour (along with rubber wrist bands and buzzers), or £50 a month irrespective of how much you used them? Do you think gyms allow people to pay for a squash court then proceed to stay there all day? Also, think about how much freedom we have, and the rules were happy to abide by down at the swimming pool (no bombing, no petting etc). In a wall all they ask is that you climb safely and more importantly SET A GOOD EXAMPLE. This is the nub of the issue when it comes to most things, especially the bowline, in that although you can tie yours one-handed in the dark the guy beside you can’t, and for all beginners, the figure of eight knot is far safer.

The days of the rock apprentice are over and many climbers learn down the wall, starting with how to belay and how to tie in. Looking at other people and how they climb is how many learn, and how many pick up bad habits.

I was told once that I couldn’t belay at the Westway due to my shoddy technique once, but instead of huffing and puffing, I did it the way they wanted me to ( which is technically safer… If you have three hands!). It’s their wall - it’s their rules.

When your in their wall you have to follow their rules (no running, no gymnastic, no bowlines), and if tying a fig 8 means you get fewer accidents, and your wall doesn’t close (I’m guessing once one wall bans the knot then they’ve set a precedent and everyone will). Sure it’s unfair, sure it means it’s harder to untie (but not that hard), but if it’s a choice between climbing in the rain with a bowline, or climbing indoors with a fig 8, I don’t think it’s a big ask.

By the way, my opinion is that no knot so important as your tie in should need a finishing knot (many claim bowlines are put down to the lack of a finishing knot), and that’s why I like fig 8 (six in tail). By far the best bowline is the Yosemite Bowline, although that too isn’t going to pass muster with those bloody floor walkers!