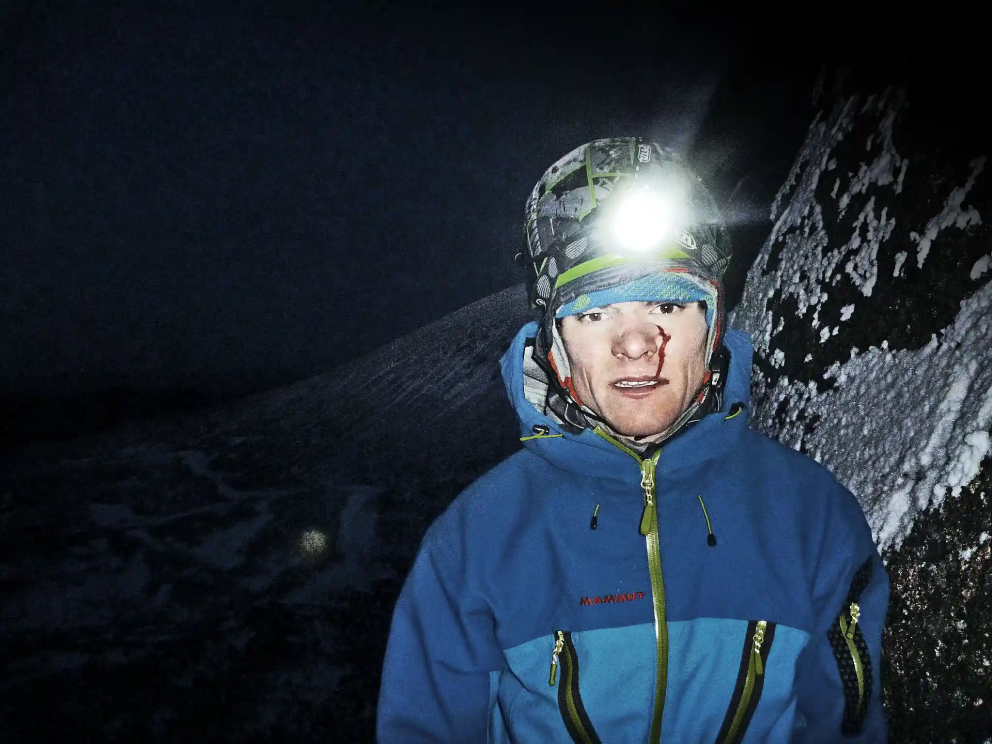 People often ask me ‘what’s the most important piece of gear you need’, which is always a difficult question.  The old answer for winter climbing would be the ice axe, as with it you can climb or descend safely, plus use it to make a snow hole or shelter (or fight a Nazi spy on top of a cable car).  For big mountains, a stove is a biggy as without it you cannot melt water, so having some kind of flame (even a candle) can be a lifesaver (try lighting a candle inside a bothy bag to see how much heat you can get from one small flame).

But if I was really to think of the one piece of gear I’ve taken for granted but that when I’ve not had it I knew I was pretty fucked is the humble headtorch.  I think the first time I really understood that without light, even in pretty benign situations, you’re screwed, was doing a one day ascent of El Cap with Calum Muskett in 2014. We’d started about 4 am, and I’d burned through one set of batteries that were not so new as I’d thought, then found the second set even less new.  By the time we hit the descent (I think it took us about 14 hours), and darkness was coming on, my torch was about as bright as a birthday candle.  Calum being Calum he’d rushed ahead, leaving me stumbling around on the trail, really considering the reality that I was going to get benighted on the bloody way down, a way I’d done about fifty times.

I often say that the most important thing to avoid if you don’t want to die or have an accident climbing is the ‘Oh Fuck’ moment.  Well, there’s another kind of ‘Oh fuck’ that can appear that is just as deadly but less expected.  Finding yourself without a headtorch at night is one, as is having no compass or map when the clag comes in or realising you cannot move from where you are and have no more clothes to put on or protection from the weather.  One of the scariest such experiences is when you realise the effect of extreme cold on your extremities, that when you’re close to hypothermia you cannot untie knows or operate krabs.

And so I always make sure when I go out on the hill I always have a headtorch that works and one set of batteries (there are quite a few interesting military spec waterproof containers for spare batteries), and if it’s going to be a matter of life or death then always carry at least one fully functioning spare and also consider a micro backup (Petzl e+Lite).  Tiny back up lights are far less effective than full-sized ones, but are also a good back up for days on the hill when you don’t think you’ll need one - remember ‘never without light!’.

On the subject of headtorches there seems to be a ton of junk lights out there, lights that appear brighter, lighter, or cheaper, but that invariably run down faster than Usain Bolt, break, or are not weatherproof.  For me, the benchmark lights have always come from Petzl, as for me no one comes close to function and reliability, trumping then on one aspect yes, but never the whole package.  For me the current best light in terms of size, weight and function is the Petzl Tikka-XP.  For the heavy-duty user then the rechargeable Ni-MH and lithium battery is well worth buying (but I would always go for batteries for long trips).

On the subject of headtorches, two little tips that I think are worth passing on.  First, for rock climbing/mountain and winter use, I have a small (micro) alpkit biner tied with a small piece of cord to the back of my torch (clip the biner to the loop around the band when I’m not using it) which I clip to the strap on my helmet so it can be lost (easy to snag a headtorch when pulling off coils or slings).  This is also vital for speed climbing or night climbing (I’ve seen a lot of headtorchs fall into the darkness!).

A second tip is one for night navigation, especially for winter night nav, or nav in the heavy mist of cloud.  When you have a head-torch on your head you get very poor depth perception due to there being very little shadow cast from the torch.  By holding the torch in your hand you can make out the ground at your feet much better, crucial when it’s foggy or you are trying to pick up footsteps or marks in the snow (reading snow marks is vital for good navigation).  Lastly holding a torch in your hand, and not on your head, is a great way to squeeze out the very last dregs of light from almost dead batteries when you’ve fucked up and are stumbling around in the dark after some twenty-one-year-old welsh pro!