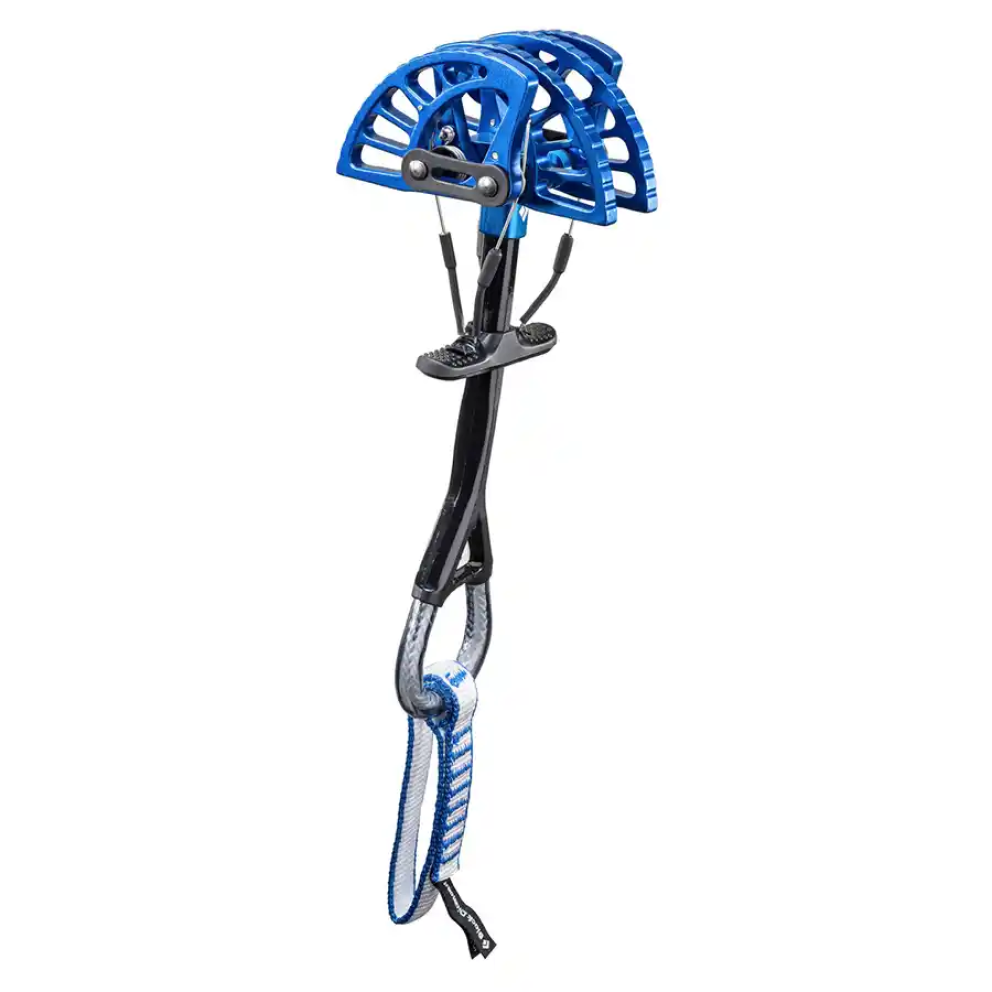 Went into Outside in Hathersage yesterday - the climbing shop I worked in for years -hoping to do some more work on my book.  I should have known it’s a non starter, as I know most of the staff, and most of the customers know me, so I tend to spend most of the time chatting away about stuff - but not working.

Anyway the conversation came round to cams, and the merits of the DMM Dragon versus others caming units, namley Aliens, Metolius Master Cams, BD Camalots and BD C3’s.

I guess I’m lucky in that I use all four types of cam, and so have a good idea what their pros and cons are, and so I thought I’d share my thoughts.

Before I begin I’d say that every cam on the market (including those made by the likes of Camp, Cassin and Aldi) are awesome - really.  All are well made, far stronger than they need to be, lightweight and a steal at whatever price you pay.  Beyond that much of the debate comes down to splitting hairs, and every climber has their own ideas and experiences that they draw on when giving an opinion.  For what it’s worth these are mine.

If asked to make a list of features I would ideally want to see in my perfect cam, it would include:

To explain this list, first off I don’t like U stemed cams, finding that they tend to get trashed (bent out of shape), and are also pretty rigid if bent against the cam axis (or visa versa - basically sideways).  Metolius probably do the best job at producing good U stem cams with their Power Cams but for my money, a cam that’s flexible and resistant to bending and twisting damage under load has to have a single stem.

A double-axle is also high on my list, but not for its ability to provide full strength when the cam is open.  The reason is that double axle cams do not become inverted - either when placed or more importantly when racked or transported.  With old Friends, this was a real pain in the arse, and either led to cam getting stuck, or reaching for cams only to find lobes
Where twisted upside down or out of alignment.  Worse still, having cam lobes that can be forced out of alignment puts a huge strain on their cables, leading the breakages.  With a double-axle design, this is never the case, something well worth the extra cost in weight.

A good reach with a cam is crucial - and by ‘reach’ I mean the ability to place the cam beyond your fingertips.  Very often you need to place a cam in a sweet spot in order for it to work, and very often this is achieved by pushing the unit in way beyond the trigger unit (meaning by holding it by the trigger you can’t reach the spot).  Having a short cam - although lighter - means you’re more restricted when it comes to where you can place it, and just having that extra few centimetres can make a big difference.

Weight is also vital, and clever design and testing has allowed cams to get progressively lighter, which is important when you consider a cam is one of the heaviest pieces on your harness, and that you will also carry a lot of them.

Lastly, I want cams that are strong enough to handle hard use, tough environmental conditions (cold and corrosion), and components like slings and cabling that will last.

Added to that list I’d probably go for a 13.75 (or there abouts) camming angle, and sling colours that conform with the sizing norm.

So what about the cams?

First off I’ll start with the C3’s.  Initially, I liked the C3’s, finding they ticked many boxes, being light, easy to handle and compact.  But slowly I found I didn’t trust them as much as I did other units (aliens, Master cams), finding them less reliable in many placements.  Very often I’d place one and think “If that was an alien it would be bomber” only for the C£ to rip under load.  This is probably down to then being in effect a mini U stemmed unit, and so are rigid in one plane.  I also don’t really like three-unit cams (TCU), finding that they offer less adaption to a placement.

I’d say for trad climbing where ‘standard’ placements are mostly encountered (i.e. not shallow, or peg scars or strange rock weirdness) Camalots are near perfect on all fronts, and although I’d like to see them get lighter I think beyond a few grams they are probably as good as they’ll get.

For my money the Master Cam is the nearest anyone comes to cloning an Alien, and these are well-made units (like all Metolius kit). Unlike Aliens, the cams are made from harder alloy which means they will last longer (not mushroom out), but also loses them the edge on Aliens as I think softer cams give more bite in very marginal terrain (I often think of Aliens as a kind of copperhead cam).  The upshot of being harder is that this could - in some placements - give you a stronger unit - meaning in a marginal placement an Alien would be better, but side by side in a good placement a Master Cam would be stronger (some people think Aliens can rip out if subjected to a repeated loading due to deformation).

Down sides of the Master cam is that - not being a double axle unit - the cam lobes can become twisted, and reset them you have to pull the cord cabling back into position.  On the subject of using cord over cable, personally, I’d like to see all cams using cord, as it’s much more field maintainable, and should be tougher than cable.  Like the Alien the master cam is very narrow, giving you a unit that will go where most others won’t. I’ve heard reports about climbers on sea cliffs finding the Master Cam axle corrodes badly (I’m told it’s not galvanized), which if true is a problem, but so far my cams are OK (but haven’t been exposed to salt).

For me, the biggest problems for me is that the Master Cams get stuck like no other cam I’ve ever used. Perhaps I’ve got lazy, but using primarily Aliens and Camalots, I find you can get away with stuffing cams in (yes over camming) and 99% of the time they pop out easily.  With the Master Cams this approach was a disaster, and as soon as I got anywhere near to their limit they would get stuck - and I mean stuck!  Perhaps this was partly due to the compact nature of the head - meaning there was less play - but these things seemed to just become welded tight.  Once I’d discovered this I backtracked and had to go back to basic cam school and treat them with a bit more care and respect, never over camming, and being weary of them walking.  Was it worth it?  Well yes - these units are close to alien perfection, and in the hands of an experienced climber they are perfect, especially when faced by tougher placements, but perhaps for those who want to think a little less (less tangles or sticking issues) then a two-axle unit probably remains the best bet.

DMM have done what they do best, and have reengineered and re-imagined probably the best ‘do it all’ cam design around, but fundamentally the Dragon for all - intents and purposes - is a Welsh BD Camalot.  Most of the differences are hair-splitting (stiffer cable on the Dragon, lighter and narrower forged cams) and although originally people had high hopes of a lighter unit, really the differences are marginal -well apart from the thumb loop.

I hope I’m wrong, but I really feel that DMM dropped the ball with the tumb loop design, and on many levels.  First, it reduces the reach of the unit - and by a large margin.  Having a secondary loop is obviously ideal for aid climbers, but also having that other loop comes in handy sometimes when setting up belays, giving an extra connection point.  The unit also just doesn’t handle as smoothly (unracking it and placing it), as a Camalot and is just more messy on your harness (mess equals tangles and time lost), although I guess the more you use the Dragon the less you’d notice it.  Even so every time I use a Dragon my heart sinks because I know on a user experience level it’s a step back from what BD and Metolius are using (thumb loop). I also think the sling is too thin for the job, and that climbers will need to get the unit re-slung more often than units with 13mm slings, or worse still (and more probable) they will use units with slings that are knackered.  Worse of all I just think that the design of the thumb loop is just simply inelegant and messy.  DMM have stressed this design change was due to worries about strength, but I wonder if it was more to do with pride, after all using a BD style thumb loop would make it a plain copy of a Camalot?

Never the less the Dragon - for its faults - is still a beautifully made cam, and its extendable draw does give it more inbuilt extension than any other unit - and as it stands it is incredibly strong - and I doubt most climbers would even notice the difference between a Dragon and a Camalot.  I’m not nationalistic but I do think that supporting DMM is also vital, as climbing needs DMM more than I think DMM needs climbing.

I’m told DMM have a new small ‘alien’ style camming unit in the works, so I hope they either just copy the alien - or do something even better.

Bottom line is that when it comes to the job of ‘going in’ and ‘not coming out’ no one has yet to better the Alien (standard or offset).  As far as I know, manufacture is on hold at the moment while the company looks for a new buyer, and even though they’ve had a rocky road over the last few years - with recalls and supply problems - these cams remain the benchmark.  Which beggars the question why?