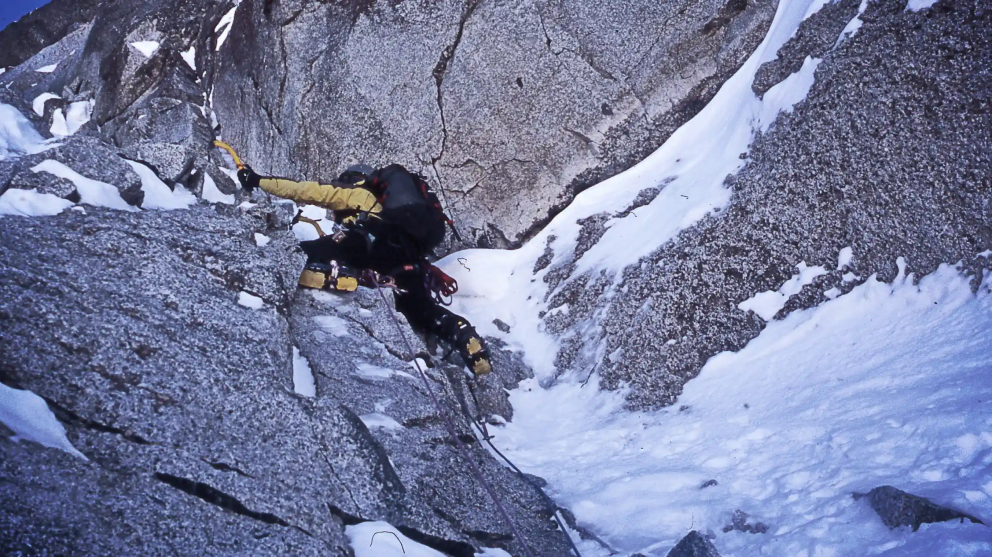 So Season after season you go up north to Scotland - and some times - rarely - to the Lakes and Wales - to go winter climbing. You’ve undertaken a standard apprenticeship or rock and then ice, easy routes first - almost walking - then onto harder routes. But now you feel in a rut, climbing no harder than III or IV.

A tough grade IV on Ben Nevis feels like the living end, and even the thought of moving up onto V’s scares you to death. Standing on a belay on Tower Ridge and looking over at the routes on Indicator Wall, looking at those climbers running it out, their gear suicidally spaced, is enough to give you the heeby-jeebies. And yet there are so many classic routes you want to do that stand at this grade. How on earth can you move up a notch?
First, you must ask yourself a question that is more often than not overlooked - probably because it’s a hard one to own up to; why can’t you climb harder?

Here are three common types of climber who are in this position:

You’re just crap - but happy to be that way.

In this case, you’re just hopeless and weak, and even on grade III’s your out of our depth. This is probably down to the fact that you climb very little, and the climbing you have done has not built up your confidence. You’re a tourist and you know you are; unwilling to put the effort in the climb any harder, and also happy to keep it that way.  Sure it would be nice to do those hard Cold Climbs classics, but really you’re just not cut out for the scary stuff.

You’re super keen and have moved up the grades quickly, but self-preservation has made you back off a couple of harder routes, and now you don’t think you’ll be able to move up a grade. This is compounded by the fact your climbing partners are climbing the same grade as you, and so you’ve not even seconded anything hard.

You’ve been climbing for decades, ticked off just about every classic in your grade, and amassed a huge amount of experience in the Alps and in the greater ranges. And yet you can’t seem to break out of doing grade IV’s. For you, these routes are hard enough, and you’re waiting to feel at ease on those routes before moving on. At the same time you’ve become resigned at the level you’re at, telling yourself that you’re a mountaineer more than a technical climber.

Before we go on it’s worth pointing out - in fact, make it your mantra - that “Grade V is HVS and grade VI is E1”. Can you climb those grades comfortably? If not that this is probably the most important benchmark to reach (although not for all) before you consider hard winter routes, as a V Diff climber will probably lack the mental, physical and mechanical skills needed to stay healthy on most hard winter routes. If you can’t climb that hard, and you don’t feel like you can push your rock grade that high then stop reading here (climbing HVS and E1 are easy with only a small amount of work…. really).

So have you passed that test - you read on!

Right, here are ten ways to move up that grade.

Seems obvious this one doesn’t it, but how many people rocking up below some grade V ice horror that has ever climbed anything that steep for that long? Probably not that many. Yet up there your life literally hangs by what you know about climbing ice and placing pro, and believe me, it’s no place to wing it.
And so if you’re going to climb ice then learn to climb ice. This can be done in two ways. The best is to go on an ice climbing holiday (climbing in Scotland is never a holiday), somewhere like Canada, Norway or France. He’ll make it a long weekend.

Go out armed with sharp axes and crampons and plenty of screws, and start easy and work your way up in difficulty. Have a go at top-roping something stupid. Watch how the locals do it. Get your shit dialled dude.

The other cheaper option is to get on an ice climbing wall in the summer and get some experience on the steep stuff, gaining confidence, after all when climbing ice - which when you think about it is pretty easy - is all about believing that last statement.

I guarantee that after this ice clinic that no classic ice route in Scotland will be harder than WI III* (Water ice) and you’ll cruise it.

*note: nice cascades can not replicate all the conditions accounted in Scotland, such as shit ice, whore frost and waterfalls running under you as you climb.

This doesn’t mean going out and hooking your way up classic rock routes, but it is about getting used to your tools and crampons. Ideally, you need to find some structure to practice on or a wall that allows mixed climbing. This will help develop strength, stamina, confidence and a pick instinct (what a pick will hold). If you don’t have any of these options then look at buying something like the Alpkit Figfour, which allows you to climb on climbing walls or bouldering walls while working your dry tool muscles.

Learn to push it

If you want to climb harder then try and push your summer grade first, always aiming to climb in control and well protected. You should also become used to self-protection, by what I mean doing moves where if you fall you’ll deck out, but easy enough that you know you won’t fall. If you question your ability not to fall and die, then you should back off, as often on winter routes you will find yourself in ‘unfallable’ positions - sometimes with unfallable belays as well!

Learn to make it so

In the autumn when the sky is heavy, and the crags are lashed with rain, go out and climb big long easy rock routes. Go up crappy grass filled gullies and frig your way up several.

Make climbing a battle instead of ballet, and learn to squirm, struggle and fight. These skills will prove perfect when you find yourself in a tight - and frosty - spot.

Lots of people can climb grades VI without having to do anything, but seeing as you can’t then you’re going to have to put in some effort. What you need to do is approach this as you would a marathon, or a triathlon. Come up with a training strategy that increases in intensity towards your goal. For winter climbing I would ignore most of the training articles you see, as I think most people are already strong enough to do it. What you need is to build core strength (cardio and strength) on top of which you can balance your confidence. If you can run a half marathon every week, do twenty pull-ups, swim a mile, and bench press big to big for a skinny climber, then you will not only be strong and fitter - but you will also know you are.

Try before you buy

One of the biggest obstacles in climbing hard routes is the fact that they are hard. If you climbed a hard route by mistake, you’d probably find that it was indeed hard, but not quite as hard as you’d imagined it would be. The reason is that simply the worked “Grade five” is enough to put the willies up most climbers. What you need to do is shift your perception from “Grade Five - I’m going to die” to “Grade Five - I can’t wait to climb it”.

One way to break this barrier is to climb some hard routes as a second, allowing you to see just what’s involved. In the past, this would be done as part of your apprenticeship, but with a more fractured intro to climbing for most, another option is to get a guide to take you up something hard - plus teach you something at the same time. Believe me, it’s money well spent (Scotland has some of the best climbing instructors in the world).

When I started all I had was John Barry’s Alpine climbing handbook to guide me, but these days you have literally hundreds of well constructed, in-depth and up to date pots, blogs and features on the web about winter climbing. Spending a few - well maybe more than a few - hours on the internet, and a novice winter climber can gather several lifetimes (and a few dead ones too) about winter safety, gear, strategy and technique - not to mention inspiration.

If you don’t watch your step the biggest obstacle in your ambition will be the fact that you’re dead. Don’t blunder into an incident through a lack of knowledge. Learn how to be in the hills in bad weather and don’t ignore boring stuff like navigation (don’t be ashamed to buy a GPS), avalanche awareness and winter survival. Winter climbing is like cragging, but sometimes, like finding a safe way of the ben in a storm, it’s more like warfare.

Buy it and sit and look at the pictures over and over. Look at the crap gear they had, cutting steps or swinging axes people wouldn’t want to climb grade I gully with. These men weren’t gods, they just had balls. You on the other hand are also not a god, but to those guys, you’d look like the ice climbing version of Predator; decked out with alien technology curved axes and mono points, boots that together weigh less than one of their, and clothing that you could nip up Everest with - not to mention 8.5mm dry coated ropes, cams, nuts, ice hooks, tricams, helmets, GPS, up to the second weather and avalanche forecasts and UKC posts about conditions. So instead of flicking through Cold Climbs and looking at how hard all the routes look, just think about the outrageous advantage, you have over those guys. Frankly, it’s cheating.

As with training put a plan together for your dreams climbs. If you do fuck all you’ll do fuck all, so stick to it and make you your project. When the day comes forget all I said about it being easy - that’s just a trick to make you try. It will be hard. You want it to be hard - don’t you? Instead of a reason to back down - again - revel in the difficulty of the route. Treat is like a puzzle. Solve what’s in front of your nose, move up and repeat. Carry a good rack and use a good pro to bolster you upwards. No winter route in the UK is that long, and even the hardest classics comprise of lots of easy climbing interspersed with hard climbing.

Also in order to make that jump may require several false starts, routes or pitches backed off, until you make it to the top. But once you do make - make that jump in grade - you’ll be glad it was hard because you’ll have done somethings others dream about.