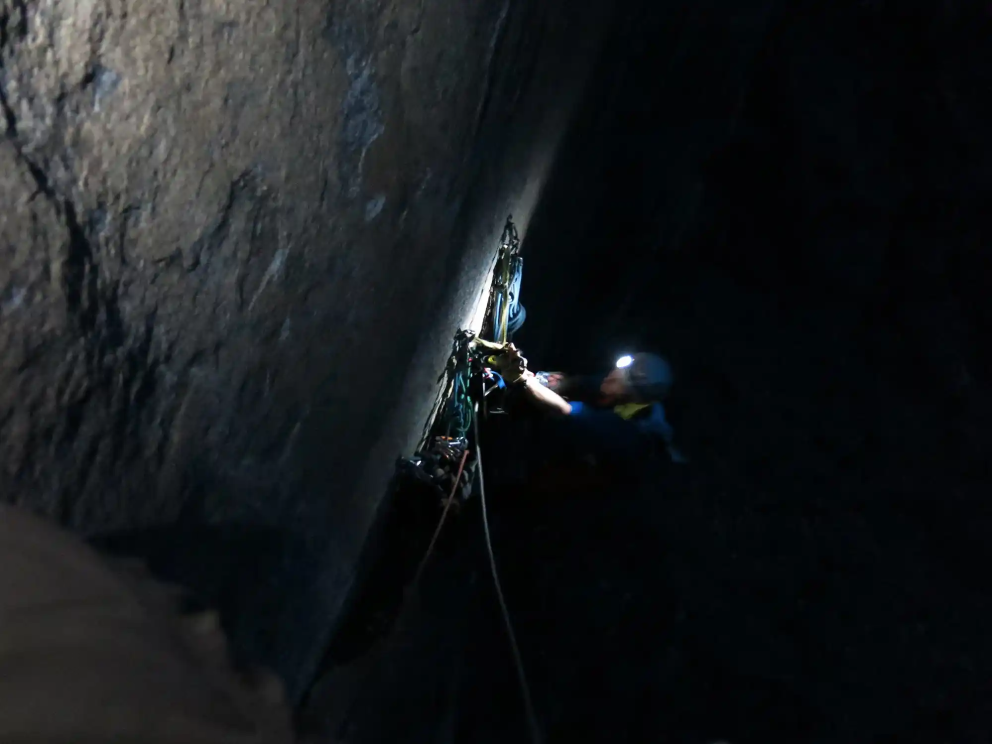 Been quite an up and down week here in the valley.  We arrived as just as they lifted a dead British climber from El Cap, and people are quite down due to another fatality on el Cap the week before (I’ve never seen El Cap so quite). We spent a few days fixing ropes on Tribal Rite, trying to dodge the sun, but I hadn’t heard from Karen for a few days and so texted her ‘Are you alive? XA’ only to get a message back:

‘Don’t panic but I’m in Carlile hospital… got hit by a car on bike.  V lucky.  Sleeping off the shock and bruises.  Not sure how long I’ll be in yet but don’t worry and climb well X’

Karen being hit by a car had been something I’d been expecting for as long as I’ve known her, and it was never a question of if, but when - and if she would just be dead or badly injured (when you only have a small percentage of your body working, there’s not much real-estate left to break).  I called her straight away and could tell from her voice it wasn’t good.  She’d been hit from behind by a car going fast down some lanes, the sun low so the driver didn’t even see her, and though he’d just hit a sign.  All Karen remembers was an impact, then laying in the road seeing the driver running back to her and holding her and telling her not to fall asleep (the ambulance took an hour and a half to arrive).

Once in hospital they X-rayed her and said she was OK to go home (?), but luckily a friend came round to check she was OK, and by morning she was back in an ambulance and has been in hospital (Carlyle) ever since, having Cat and MRI scans (she has blood in her spinal fluid, and her right arm was not moving - which is not surprising as she has bloody tire marks on her shoulder).  One inch the other way and she would be dead.

As you can imagine I was all for jumping in my car and flying home, but she was insistent I stay (Steve has spent a year training to climb El Cap with my help, and I’m sure she knows how much this means to him).  She told me she was fine, and so I asked for her mate Simon’s number to talk with him (Simon had been at the hospital, and being a trained paramedic was a good judge of how bad things were).  Of course, by the time his number appeared via text I knew she’d primed him, and so the answer was ‘Stay in Yosemite’, with a number of texts coming from other people saying the same thing.

“Just wait until I have my scans back before deciding what to do,” said Karen.

I was left with a million dark thoughts, worse being what if her arm never came back to life?  For Karen it would be as good as game over, being unable to do anything she had before (transfer into a wheelchair, ride a handbike, drive a car).  I selfishly thought about our life together, and what it would mean for me, and if we’d be strong enough to face it, by which I mean me.

Then I get a text from Simon, saying not to go climbing unless I could totally focus on being safe, with no distractions with thoughts of Karen.

I came back and told Steve (we had our ropes fixed two pitches up a route and were going to blast the following day) what had happened, and found myself feeling a bit in shock, and very upset (if I’d been with her maybe she’d have been OK - but then I hate cycling these days as I think it’s unjustifiably dangerous).

I knew what Steve was thinking - was this it - was I going home, but he never said it - I know this means so much to Steve, who in a few months could be totally blind.

We went down to El Cap bridge to work out what to do now, and for some reason, I just needed to get climbing and take my mind of this.  I kept talking to people (“Hey - You’re Andy Kirkpatrick - I love you dude”) but as soon as I forget about Karen I get hit by reality again like a ghost passing through me.  “Maybe we should just go and climb El Cap in a day” I said to Steve, “Like do Zodiac - starting tomorrow morning at 5 am”.

As I said Steve has been practising in a quarry for a year for this trip (he only has 10% vision left - I kept saying 20% but was wrong - so he’s got a ton of other stuff to deal with), so suddenly coming up with a one-day ascent was probably a bit radical (this would be Steve’s first big wall to boot).

“Yes, OK” said Steve, and so we went up and slept at the base.  Below is Steve’s account of the climb:

As I fell asleep again Andy pushes on in the dark. His stamina is remarkable. 1600 feet off the ground I hang off two bolts holding a rope the only thing that links us together apart from the need to climb. I struggle to hold up the weight of my own head as I drift off again, I’ve turned my head torch off to save the batteries so I hang in darkness. I’m shocked awake as Andy pulls more rope through my belay plate as he makes valuable progress, I turn my torch on to check the time it’s 1:17 am. My mind wakes up for a minute to compute what we doing and where we are. At 4 am the previous day we woke up from the worst night sleep we have had, Andy slept on an ants nest and was woken by hundreds of ants crawling all over him along with toothache. I just couldn’t seem to settle, maybe with the fear of what was to come. We dragged ourselves to the base of Zodiac a route on El Capitan’s 3000ft granite mass. Our plan is to try and climb it in a day. I have never climbed a big wall before and this will rack up 20 ascents of this great rock face for Andy. I watch as Andy eats a cold tin of beans and I almost throw up, I’ve never been good at eating food in the morning. At 5 am we set off. This style of speed climbing relies on skills, fitness and maybe a bit of luck. It’s now 2:30 am and Andy pulls onto Peanut Ledge just 3 pitches from the summit, he yells down to me that we need to stop and sleep, part of me wants to keep pushing on but a bigger part just what’s to be asleep safe and comfortable in bed. As I arrive at the ledge it’s only 12 foot long and maybe 2 wide at best. We attempt to sort gear and give up, our bodies not wanting to give another ounce of energy. We only have one sleeping bag, a bivi bag and a roll mat cut in half between us to sleep. Andy kindly offers me the sleeping bag, maybe he’s seen how I feel through my heavy eyes. I tie in and lay down. All I want to do is sleep but my body won’t let me, maybe its paying me back for what I have put it through in the last 22 hours. 3 hours later we are back on the move. We have little water between us, at 6 am it’s already heating up. This is a dangerous place to be now and we need to move quickly. As I pull over the top I’ve climbed my first big wall. Andy welcomes me into a club in which he has made a name for himself, it’s a small club and I feel privileged. It’s midday and after 31 hours I’m wrecked, my body not feeling like my own. We sit on top of the ‘Captain’ in the shade of the trees recovering before the 2-hour descent, we fall asleep in intense heat. As we pack the haul bags Andy asked me if he told me about the system we would be using to speed climb and I answer no. We both laugh. I ask him why he came up with a plan to climb Zodiac in a day when we have never climbed before, he shrugg’s his shoulders. Maybe it’s trust, maybe we are stupid………….

All the way up the wall I kept wondering if this might be the last time I climb in Yosemite, considering what it would be like to have to care for someone (I know it’s morbid but there you go), but mostly I thought about the climbing.  That’s the good thing about climbing.  Halfway up the wall I stopped and waited for Steve and I texted Karen to say that we were halfway up Zodiac and that whatever happened we’d get through it together.  This was my sixth time up Zodiac, my 20th time up El Cap, if I was strong enough to face the commitment of this (no portaledge, no sleeping bag, only enough water for one day) I must be strong enough to face what fate would bring.

When we reached the top I guess the word ‘tired’ doesn’t cover it, but the first thing I did was switch on my phone and see what the results were, getting a text saying that they showed torn ligaments in her neck (but no fracture) and localized impact to her shoulder that should recover in six weeks and a nice picture of Karen already training from her hospital bed.

And so a day later I’m still here, not sitting on a plane when I know I should.

Steve plans to solo El Cap, and the idea was I would solo it above him, and try and make a film about big wall solo climbs.  I asked Steve what he would do if I went home (I’m not sure how Steve could get without me being here, as he’d have no transport and a ton of kit, so would probably have to come back as well), and he said: “I’d still do it”.

Sometimes - no always - the climbing is the easy part.