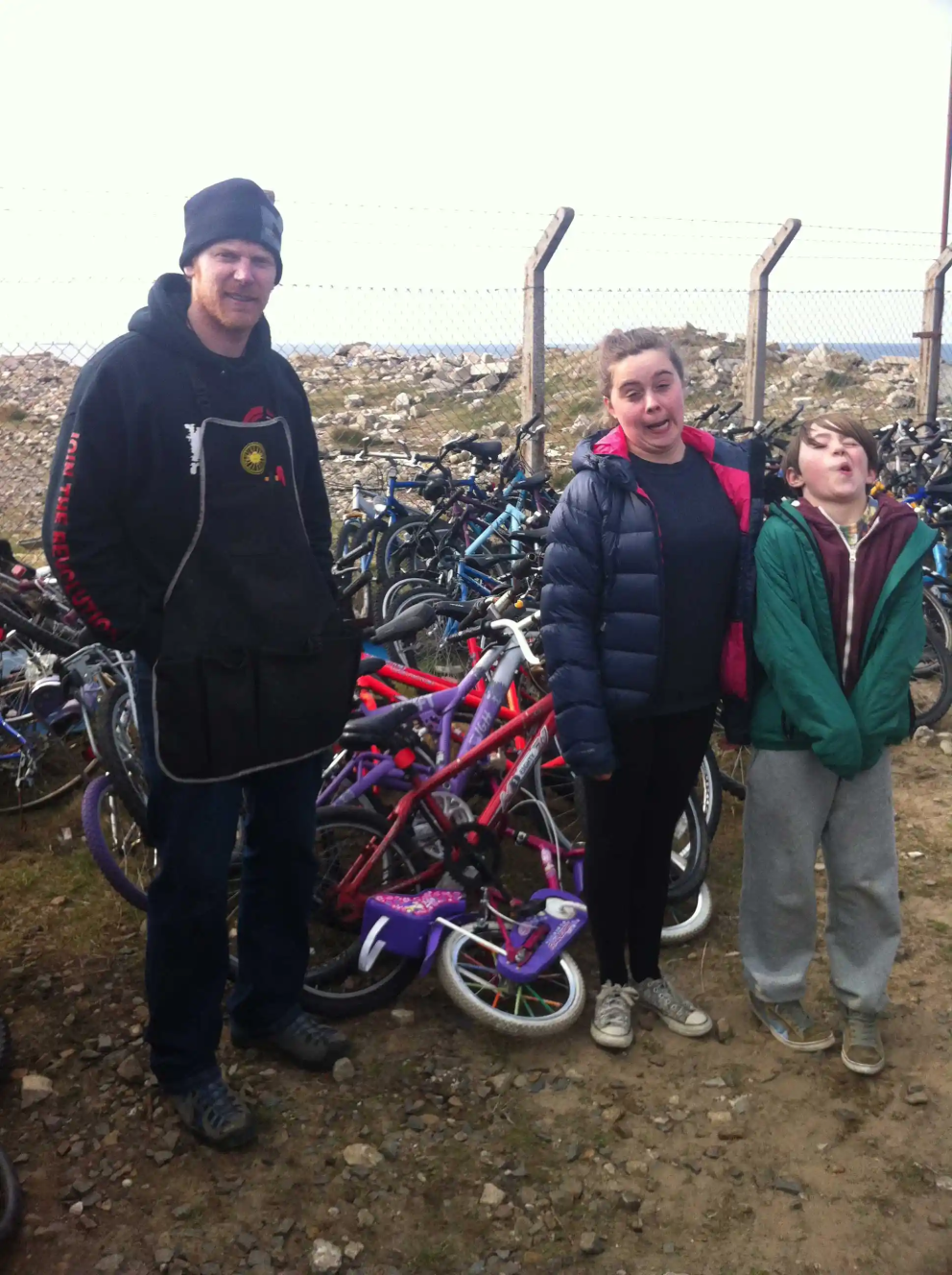 I gave a talk a few months ago to a school in East Yorkshire.  It was a small country school, not used to climbers coming to speak to them, the kids excited that my face had been on TV once or twice.  They were doing a project on Antarctica and had built an amazing full-sized igloo out of plastic bottles, and sat and listened as I told them about my adventures.  They were a great school, the kids even noticing my trick line about not seeing any polar bears down south.  On leaving one of the little kids said to me “You’re so cool, I wish you were my dad’ a line that broke my heart.  After the child had gone the teacher gave me a knowing look and said ‘You’ve not met her father”.

At Kendal last year I gave a talk with Ella about a film we made about a trip to Norway with the BBC, then another about reflections on the solo climbs I’d done.  Ella was amazing as ever, his skill on stage and in speaking far beyond her years, her brother, a little shyer, also good at being himself.  In the bar after the talk, I overheard some people speaking about me, one of them asking “how did his kids turn out so well?”.

Someone emailed me yesterday from the BMC asking if ‘climbers make good fathers’, for a piece they were writing for fathers day.  My reply was off the cuff, the first thing that popped into my head, that, “they make terrible traditional dads (absent, distracted, selfish), but great cool dads (fun, childish themselves, always eager to play!)”.  I’m not sure if this is true, but it’s pretty true for me (my kids don’t do fathers day anyway, as I’ve always been in Yosemite in June).  I’ve never been good at all the stuff their mum seems to do so well, to be a constant, to understand how to shape their education, to keep them fed and clothed and warm.  I get to be the cool one, the one who parachutes in, as I will do today, to whisk them off to somewhere which is not normal (me and Ella are speaking at the Muckle Toon adventure festival on Saturday).

Today I got a text from my mate Steve Bate to tell me he’d just found out he’d been picked by British Cycling to race in their para squad in Rio, an absolutely amazing result, and one that’s come from an inhuman amount of hard work and sacrifice over the last three years (by Steve and his wife Caroline).  It’s no lie to say that Steve literally stepped off the plane after soloing El Cap in 2013 and straight onto a bike (he got on the development squad the same week I think).  I wrote about Steve’s journey a while back, but you can listen to him talk about it on the excellent ‘Off the Ropes’ podcast.

Wanting to send something funny, to maybe show how far Steve’s come, from almost having to start over again after losing his sight, I dug out the picture above.  It was taken in 2013 on a bitter day in Lossiemouth, Scotland, where Steve had got a job mending old bikes for a bike co-op, something far removed from the life he had as a climbing instructor.  I’d come down with my kids from Inverness to talk about going to Yosemite together, and about Steve soloing El Cap, something he’d set his mind on after a joke suggestion by me.  As is usually the case with me we didn’t talk about anything like that, just drank tea, talked about old bikes, frame building, and where the best ice-cream emporium in the village was (the Scotts don’t do good food, but they’ve got enough Italian immigrants from the war to do amazing ice-cream).  It was a bit of a wasted trip really, but I think I needed to go and see Steve to show I was serious about the trip, plus the ice cream.  After his solo, he said he understood why I was so slack beforehand, in our few meetings and lack of response to questions he sends by email: that on the wall he’d be alone and would have to depend on himself for everything (in fact I was just being slack!).

All I got from that day was a picture of Steve and the kids on my phone, a picture that pops up now and then when I’m looking for other pictures, but always brings a smile.

But looking at the picture of Steve today, fit but not superhumanly fit, kind of solid in the face of what he was going through, but not as solid as he was after El Cap, you can see he was going to be OK.  I think it’s immaterial if he gets a medal or not in Rio, the journey itself to even make it to the start line more than most people are given in a lifetime, a medal just sweet stuff you get on a cake.

But what came to mind looking at the picture again was not Steve, but Ella and Ewen, going for the camera.  Looking at them I wonder if they realise how many amazing people they’ve met in their lives, people who are living embodiments of just how life can be lived, that although not everything’s possible (Steve would be crap at darts), many things are more possible then people think.  I wonder how much of these people they’ve met have rubbed off, these funny, loud, smelly, scary people, from Alan Robert and Aldo Kane to Leo Houlding and Hazel Findlay and many others.  If there is one universal amongst them all is that they know themselves well, they know their worth and they know what direction they wish to go (and do not want to stand still and wait for life to come to them).  But being kids, well not kids, but teenagers now, I doubt they do see it this way.  They tell me that they don’t see me as a normal dad, not like their stepdad, who’s solid and stable and ‘there’, the one who they can ring to pick them up, to pluck them from the fire.  It took me a long time to come to terms with the fact I was never cut out to be a perfect dad, to do what I thought was required, and really made a hash of it all around.  I think, looking back, I was trying to be what my dad had not been able to do, but it turned out we were equally ill-equipped for the job.  And so instead I have to accept that I can only be the dad I can be, not perfect, not stable, not solid, not what I’d love to be, but only me, a man who’s doing the best he can.  If being cool is all I can be, then that’s good enough for me.