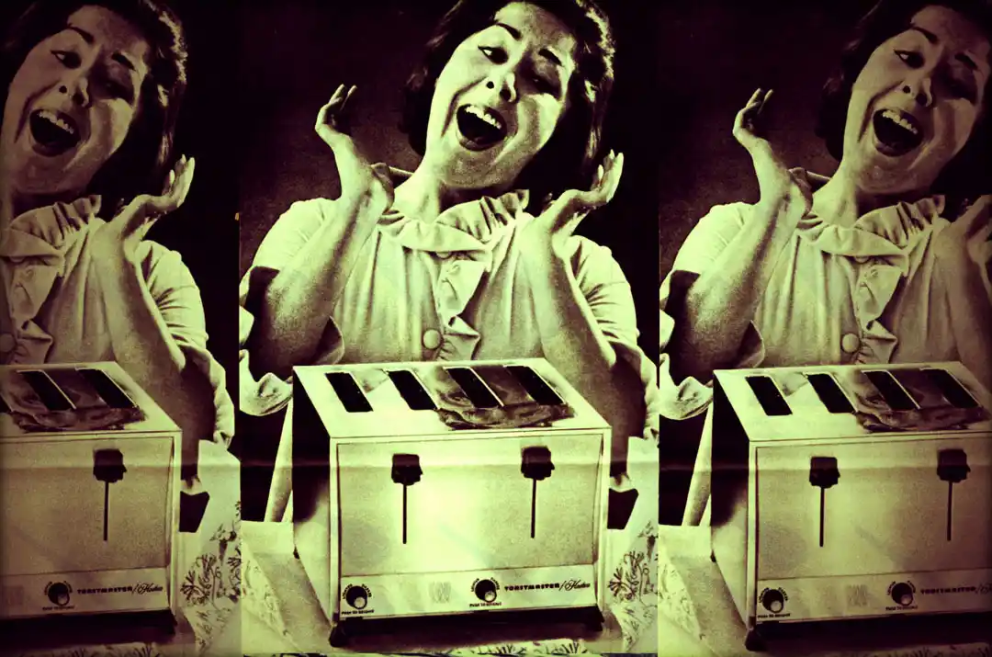 Dick in a Toaster

i really dig you. Thanks for sharing your thoughts on this blog!!

I would like to aks you something, because most of the people I know don’t seem to have the same…craziness in themselves.

I would wake up with this great Idea, super psyched about it. Really wanting to get to it done. To start immediately. If I don’t get to do it right away my interest towards the project fades, the less I want to get it done. (Here is the first question; would you say that it would not be wise to follow an idea which kind of gets less exiting after a month?)

Telling friends about my Ideas, makes me feel I am crazy. And I have rally started to think that I might be. The problem is that if a idea project is not yet realised and i tell someone their comment or opinion reflects strongly onto mine. Which alters my viewpoint again, with this changing my relationship to the idea. I once heard a author/writer say: one should never tell anyone about your ideas until they are written down because it changes them in their originality. ( Do you shut up about your pursuits?)

I am busy trying to propell into 2015 having had a really bad year.

I would be so interested to know your opinion.

First off I have no idea what kind of projects you’re thinking off, or who you are.  If you’re talking about getting a kayak and paddling to Australia from Germany, or doing all the alpine peaks over 4000 metres in a year, well that sounds normal to me, while if you want to make a skin suit out of dead people…. well maybe you’ve come to the wrong man!

Secondly it doesn’t sound like you’re crazy, in fact you’re maybe a little less crazy than all the people who you feel you to be so.  What you seem to have is a bad case of the ‘possibility blues’, where you’ve somehow grasped the possibilities open to you at this moment in your life, but feel unable to act on them, or have some kind of tipping point of seeing them through, which is tipped back by telling others about them.  And so you’re trapped, you know what you want to do, you know you can do it (or at least are excited by the fact you’ll enjoy trying), but cannot for various reasons see it through (financial, emotional, or practical)

First off it’s worth working out why you are unable to see these dreams come true, and why people who care about you try to dissuade you.  The main reason is fear (I talked about this in my blog The Urge to Live).  The people who care about you are both afraid for you, both your life, your future, your health, but they are also perhaps subconsciously afraid that you may just do it.  Most people are governed by fear, it’s the reason we form clans and tribes and communities, yes love can bring us together, but really the prime glue is fear.  Think about work, there are many who work themselves to death for love, but for most it’s for fear - fear they’ll lose their jobs, their pay rise, their place, payments on their car, mortgage, love, life - everything.  And business’s know this, they keep you inline with the stick and the bone, and the best love you like a parent, while at the same time never letting you forget that that love only comes from devotion, that that this love is not bound in blood.  When Margret Thatcher relaxed the rules house buying (until then only really a middle class obsession), opening up mortgages’ to the masses, many union’s told their members not to take the bate, as once they left their council houses and entered the private sector they would be trapped, too afraid to strike in fear of loosing their homes.  Most people are the same, they have dreams, and they have the means to make them come true, but are shackled by the lovely soft chains of normal life, the roots just too deep to tear up - too painful (I guess it’s these roots, and how they intertwine, that make a society).  Ask yourself, right now, if I said “I’m giving you the chance to climb around the world for a year” the reasons that pop into your head why you can’t (like ‘where will I store all my stuff’) etc, these are your roots.

And so when someone is brave enough to say they’re selling everything (or giving it away) and going off on some crazy mission, the people who care are both afraid for them, and also afraid for themselves, knowing if you could do it, maybe they could (perhaps one reason us Brits like failure is it reinforces the certainty they we have made the right choices not to try for something better!).

At this point I need to point out that there is much to be said for having roots, being in a community, having friends, focusing on what makes you happy right now (sitting in a warm room, watching TV, a belly full of food, a soft bed and softer body to share the night with).  Taking the hard road is just that, you are going to have to suffer, to sacrifice, to face danger and pain and doubt and maybe loose everything and not get what you want… and this is what both you and the people who care for you know.  Can you live with that?  Can you give up that dream and make do with a happy life day to day?  As with all the blues you need to either deal with them in a positive way, accept of rectify, just don’t dwell.

I think the more you can push through the possibility blues the more you deal with them each time they strike (remember that the possibility blues are always better than the impossibility blues).  I tend to find that force of action often helps me get to where I want go, which means not letting reality get in the way of a stupid crazy idea.  The best way to demonstrate this is that I hate confrontation and upset (probably like most people), and when I get an upsetting email or text I kind of speed read it while sort of squinting, so that I only get the gist of the message (I only take onboard as much as I can handle).  The problem with this approach is that very often I miss the subtlety and detail of the message (going back later I often see I totally misread them!), but this approach can be used on crazy dreams.  Just speed towards them, gathering what you need, without focusing on the negatives.

Set your course and steam on.

On a practical front try and get your dream worked up to the point where it feels like it’s possible before sharing.  Arm yourself with what you need to defend claims that you’re crazy, that you’re being rational and your mission is well thought out.  I had an old girlfriend who wanted to go to the Paralympics and what she did was instead of telling people about this totally crazy idea, she just made a folder on her computer call ‘Olympics’.  This allowed that crazy dream to have some solidity, it actually existed somewhere in the world as a folder icon and 7 letters.  It was a start.  And then she began to fill it up with ‘stuff’, and when she had enough stuff, she began to share this dream with people she know would not judge, people who would be allies in that dream, and so 4 years later, she got a silver medal.  I guess I work in the same way, I get the germ of an idea, and just start visualising the reality of making that dream come true.  One advantage I have is that I have a totally chaotic and shambolic life, and tend to deal with situations as they unfolds, which tends to be how climbs happen; like a battle, they once the firing starts all that strategy goes out the window.  Climbing for so long, and having been on so many trips I tend to not sweat a lot about the stuff I used too.

On the subject of crazy ideas, I often demonstrate this dilemma of sharing with my ‘Dick in a Toaster’ model (there is actually a route in Rjuken named after this theory).  In this highly advanced concept you dream about sticking your dick in a toaster.  I’m not sure why, but for whatever reason, in your dream this seems like the best idea you’ve ever had.  You wake up, you begin to run downstairs naked to the kitchen, full of excitement, your heart beating fast.  All of a sudden the door rings, and there you find the postman.  Now ignoring the fact you’re naked (you’re German, so this is probably normal), if you were to say (after signing for your parcel) “I’m going to stick my dick in a toaster!” what do you think the postman would say?  Would he high five you or would he put you in an arm lock and wait for the ambulance to arrive?

You shut the door and carry on to the kitchen, but before you get there the phone rings.  It’s a friend asking how you are. “I’m going to freaking stick my dick in a mo-fo toaster!” you reply.  Again what would his response be?  It could be “wait, I want to get my GoPro and come and film you” or “I’m dialling 999”.

You put the phone down and carry onto the kitchen, to the toaster.  The toaster is a bit high to get you’re ‘old man’ in, so you hold it in your hands (the toaster), the reality not quite how it was in your dream.  You wonder if you’re dreaming still, have a little panic, suddenly wonder if you’re in your right mind - if you actually did stick your dick in a toaster in your dream, or it was something else, that maybe on waking you mixed up two dreams.  And so you’re standing there, naked, with your dick in a roaster, ready to pull down the slider and toast your todger…. what do you do?

Mmmm - maybe it’s me who’s the crazy one?