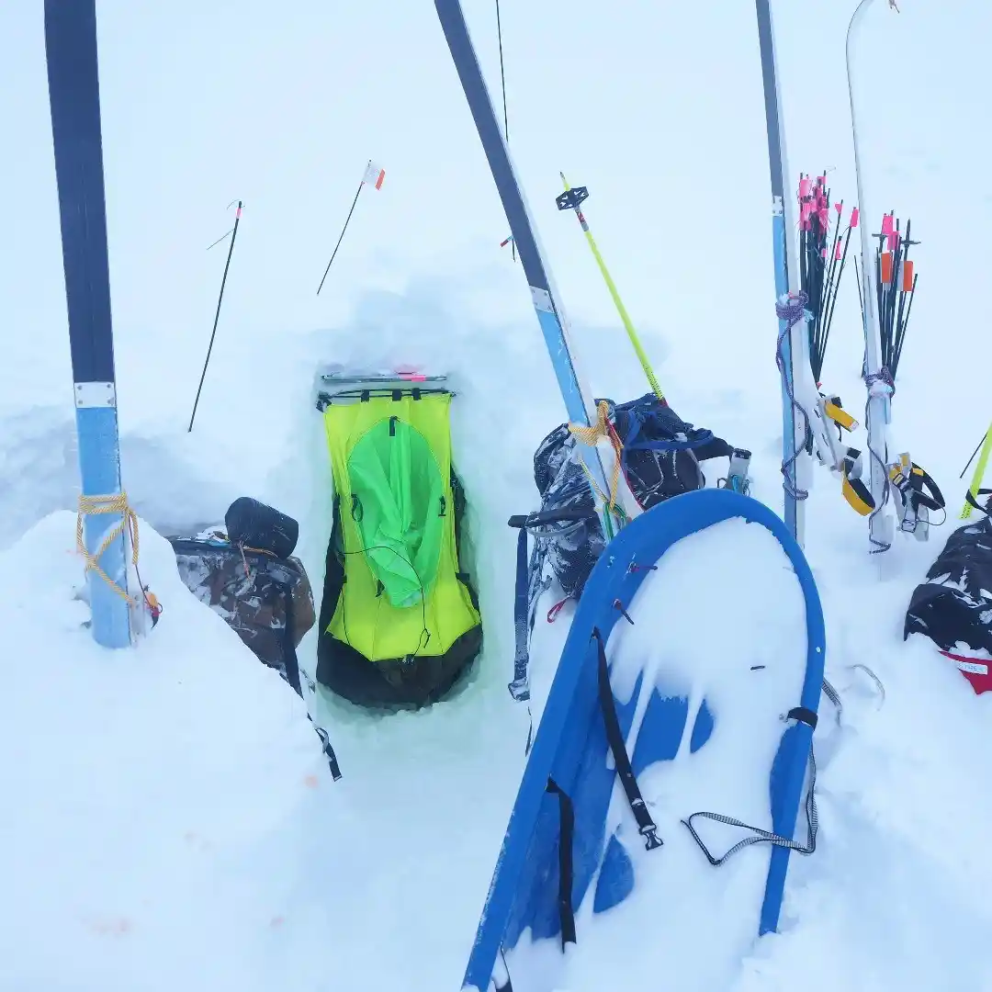 What can you learn in a picture? This snow hole door cover is a good example of sewing up a solution to a problem, why it’s always worth having a sewing machine and a store of inexpensive ripstop, some webbing in your house (as well as fleece, pile, power-stretch, Cordura, Cuban fibre, Pertex, 3D mesh, Climashield, X-pac etc!).

The door weighs nothing and is designed to fit over both vertical and horizontal entrances (pits/trenches). It features loops all around its edges, allowing it to be secured by stakes or wands, and has pockets along its bottom that holds snow in order to weigh it down and stop it from blowing in. The door also has a secondary sleeve (tunnel), cord-lock entry in case you’re snowed in (which we were every day. This kind of door is not something you’d need for normal snow holing, which would only be for a night or two, but for multi-week, or multi-month living (we lived in snow holes for five weeks), as generally, you’d just close up the hole with your rucksacks.

In this case, the temperatures got so low, we ended up using our pulk-bag cover further inside the snow hole, in order to create a two-door system (we also sewed up our pulk bags, which could be fully opened up, and also featured clip loops for bamboo wands). They say that a well-dug snow hole should give you a living space in which it should not drop far below 0 degrees C, which is why they are a vital survival skill. But on this trip, we often measured temps down to -20 degrees C inside (we did not venture out to check the outdoor temps).

Note: the skis we used were £15 off eBay, Asnes Nato skis, with glued and screwed on kicker skins. I’ve used this skin set up in Greenland and Antarctica, but here, we had a lot of deep snow in the first week and had very heavy pulks (we had 2 months of food and fuel!), and so we had to improvise ski crampons out of 7 mm cord (these worked very well in very hard snow higher up the mountain, crossing sastrugi etc).