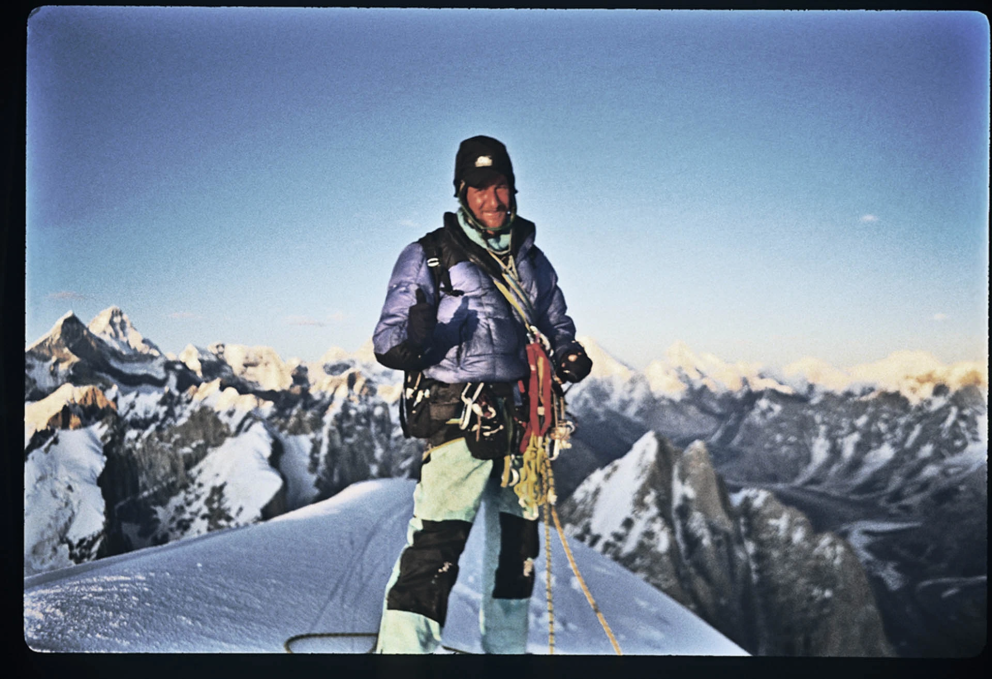 For me - this is one of the photos that started me off on this life long love of big walls: John Middendorf - thumb outstretched - as ever - on the summit of Trango Tower. The photo was taken in 1992, around the time I was working in a climbing shop, and I first saw it there, in the pages of Mountain Review magazine - one of the best climbing mags ever produced. I had no idea who John was, but he had the air of Paul Pritchard to him, and I knew who Paul was (it’s funny to think that maybe @Paul@pritch5 was maybe modelling himself on John at that moment, even to the extent that both now live in Tasmania). Climbing seemed full of cool real men - plus Catherine and Alison - but this guy Middendorf - well he was something else, he was beyond cool, of a steep elite that made my own little Gods seem quite pedestrian. Reading about John’s climbs in that mag - a piece written by Cam Burns I think - I saw a whole world I did not really know - the world of aid and big walls. I have never asked John about the why, but it seems that at this moment, that my dreams took flight, his own wings settled and drifted, and just like that he seemed to be gone - like a Spacey Devil. The death of Xavier Bongard - his partner on Trango - as well as business - both good and bad - may have affected John. Never the less - one day - I met my idol, just before he exited the stage - in Llanberis at a big wall symposium. I’d done a few walls by then but didn’t say much to John - he being my Layton Kor.

What do you ask a God? “What’s your favourite hammer?” And then he was gone - one of the few that got away - but not quite. Over the years I’ve kept my eye out for him, asked Pritch if he’d seen him about, what he was up to in Tasmania: (“teaching”).

Then a few years ago I found an original rusty bird beak below the Troll wall and emailed him to see if it was his - and this Godly ghost replied (it wasn’t). Then this year I asked John if he’d write me the forward for Higher Education, which he did, a great piece of revealing writing about the human, not the God. He sent me some pictures too - but not the one I really wanted, the one that started it all, of “you on Trango, your thumb in the air”.