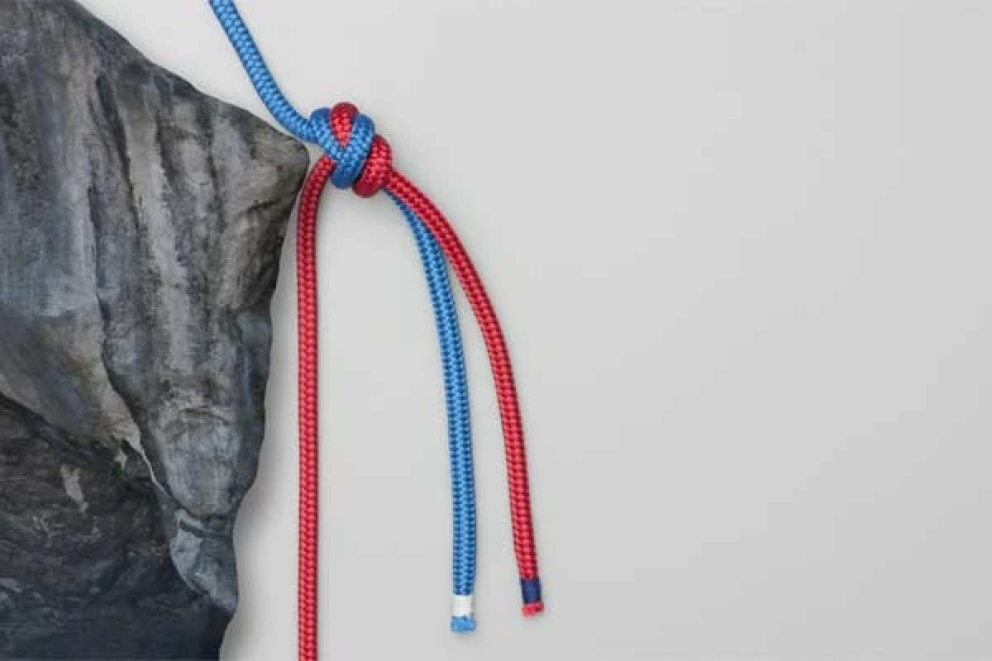 I recently read in your blog about abseil tat that,

Could you say a bit more about this? I like many climbers like to have a untied cord to make anchors with. I used to use 2 figure 8 ( easier to untie the EDK).

Thanks for the question.  A figure of eight should never be used in a situation where the knot itself will be cross loaded, the reason being that the knot can invert and roll (some people say it capsizes), rolling over and over until it sucks up all the tail and comes undone.
On a badly tied figure of eight it has failed at 50kg!

When joining two ropes together to form a EDK it’s obvious that someone new to the knot would go with a figure of eight, as you’d assume it was stronger than an overhand knot.  Unfortunately the opposite is true.

This may sound a bit alarmist, but due to the increased adoption of the EDK, many climbers have switched from fool proof reef knots backed up by fisherman’s, or rethreaded figure eights, and switched to the EDK, but made the mistake of using what they feel to be the better knot.
Add a wet rope or an iced up sheath and this simple mistake can be terminal (I know of one well known climber who rapped down fine, only for the rope to come apart as his second came down afterwards when using a figure of eight.  He survived but was badly smashed up). This simple mistake has killed a great number of climbers, so this isn’t in the realm of trainspotter theory (such as why cordellets are dangerous, which makes scene on paper, but isn’t born out by practical experience).  The thing about an overhand knot is it won’t roll as easily when loaded hard, and so is much safer, but it’s not as safe as a figure of Eight follow through (tie figure of eight in one rope, then thread the other rope back through the knot, so each rope exits from a different end - hence no cross loading.

So just to recap - ALWAYS TIE THE EDK WITH A SIMPLE OVERHAND KNOT.  If you’re too afraid to trust it, then use the ‘improved’ version, and tie a second overhand up tight against the first (in my experience this just comes undone, and so some enough you just use the one).  If you don’t trust that, then just for a traditional knot (the reason the EDK is popular, is that it is less prone to snagging over edges, as the knot flips around on hitting an obstruction, plus it’s easy to tie in difficult situations).

In the article you reference, I’m talking about tying your abseil cord together (say you’ve made a loop to tie around a spike), rather than using a traditional double fishermans knot (which can be tricky to tie in the dark when with mitts or gloves on).  If you’re using tape, then you have to go with a tape knot.  A figure of eight is still the best knot for many things, but often (such as when tying rethreaded loops into nuts or fixed gear, or the loops to equalize two rap achors - so if one fails you’r still held by one - then an overhand is quicker and easier to tie.

A good article to read on the subject is this, even though Tom comes down against the EDK.  There is also an alternative, that probably trumps the EDK in most terms, in the Triple T-Overhandknot, but again, it adds more complexity - which in my mind adds more risk in the dark, in the storm, in the real world (and not in the minds of minds of men who like breaking things).  I’ve been rapping on an overhand EDK just about all my life, and I think I’ve rapped off more big routes that many (one year I rapped a total of 3 kilomtres!), and done it with heavy bags, with two people, on skinny ropes and fat ropes, in rain and storm - and although I often try new knots, I always come back to the EDK.