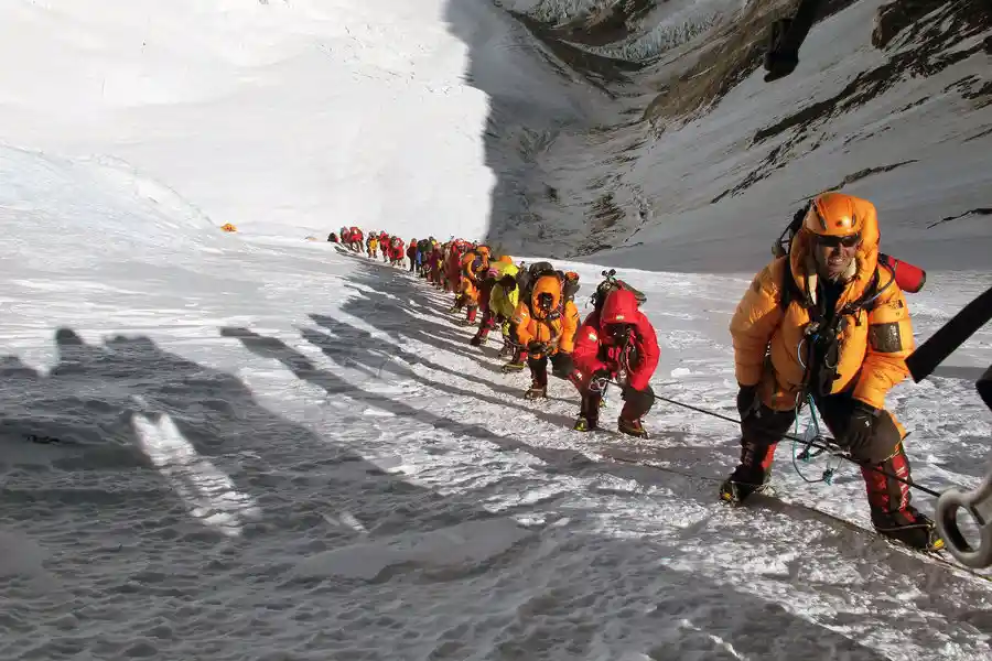 Everest - Sucking on the barrel

For some reason, I keep getting journalists - print, radio, and TV - ringing me up and wanting my opinion on Everest - a mountain I’ve never climbed on a continent I’ve never visited.  I’d like to believe this is due to my position as a world-class sounding board for the opinions of climbers, but really I put it down to a healthy google ranking and a website with my email address at the top.

Every time someone dies my mobile rings.

Every time there’s another stunt my email pings.

Every time someone finds a pair of Mallory’s old underpants I’m asked what this means for world mountaineering.

My stock answer is to point out that I’m a climber, and that Everest isn’t a climb, but a walk.  This usually gets the person at the other end a bit confused and flustered as they check their notes.  “Yes,” I usually continue “If you have to step over a dead body halfway up then it’s classed as walk.  On real climbs the bodies fall to the bottom”.

“What do you think about the recent deaths” they continue, ignoring what I’ve just said, their pen at the ready thinking that one more quote and they can file their copy.

“Oh dying is great - it’s what it’s all about,” I tell them “it makes it all so much better when you don’t”.  I explain the fact that every single summiteer will stress how ‘undead’ they are on their return (as well as in their book/website/TV doc voiceover), weighing their achievement by the number of ‘proper dead’ there were.  Sure they’ll speak to the BBC via sat phone and say what a tragedy it is, but deep down they love it - it makes it real - gives it that edge, like sucking on the barrel of a loaded gun.  If you summit in a year when no one dies then you’re forced to go back to 1996 and tell how eight people died in one day just to prove how ‘undead’ and hardcore you are.

I’m told the figures for deaths on Everest are 1 in 10, which sounds bad until you consider the ratio between big fuck off scary mountain and clueless out of their depth tourist, and I expect if you dropped this bunch into Mosside the numbers would come out the same (if nothing more than the fact that walking around Manchester in a big yellow North Face down suit would lead to certain death via mugging).  Death and the risk of it is the stock in trade of many modern adventurers (just read my book Psychovertical - I’m nearly ‘proper dead in every chapter!), be it rowing the oceans (very safe actually), skiing to the Poles (also very safe actually), or running across deserts (dito).  Throughout all these things there is that Discovery channel voice booming along about how hardcore it is by pointing out how X people have died doing it.  Well, lots of people have died driving around the M25 but they don’t write books about it (although the queue isn’t as big as Everest).  Of course, no one wants to die - just give the impression they could (most Atlantic rowers have a support boat - the last few high profile polar trips had 4x4’s following them).  But then mountains are callous and don’t care about your back story or dreams - or even how good you are.  On Everest, the safety net that keeps you from the dead has very large holes, and the higher you get the bigger they become.

These days when people get in touch my blunt answer to most questions about Everest thought is ‘I don’t give a fuck about Everest’ and really no right-minded person should either.  Who really cares about the trash up there (have you ever been to India or Nepal where a rubbish dump is called ‘the other side of your garden wall’!).  Who’s bothered about the fixed ropes, pegs and bolts apart from those who see them and have to trust them?  You can’t rape a mountain you idiot, only an idea, and when that idea is simply “X is higher than Y” then who cares.  What about exploiting the porters and the sherpas?  Again have you ever been to a developing country and seen what lengths people will go to make a living?  Most of the hand wringing by ‘proper’ climbers is all tied up with jealousy and the envy of opportunity, and everyone knows that deep down they’d suck the devil’s cock to climb it.

So, if you’re a lazy journo who’s come across this bit of writing while doing your research then please don’t get in touch (although I’m happy for you to cut and paste whatever you like).