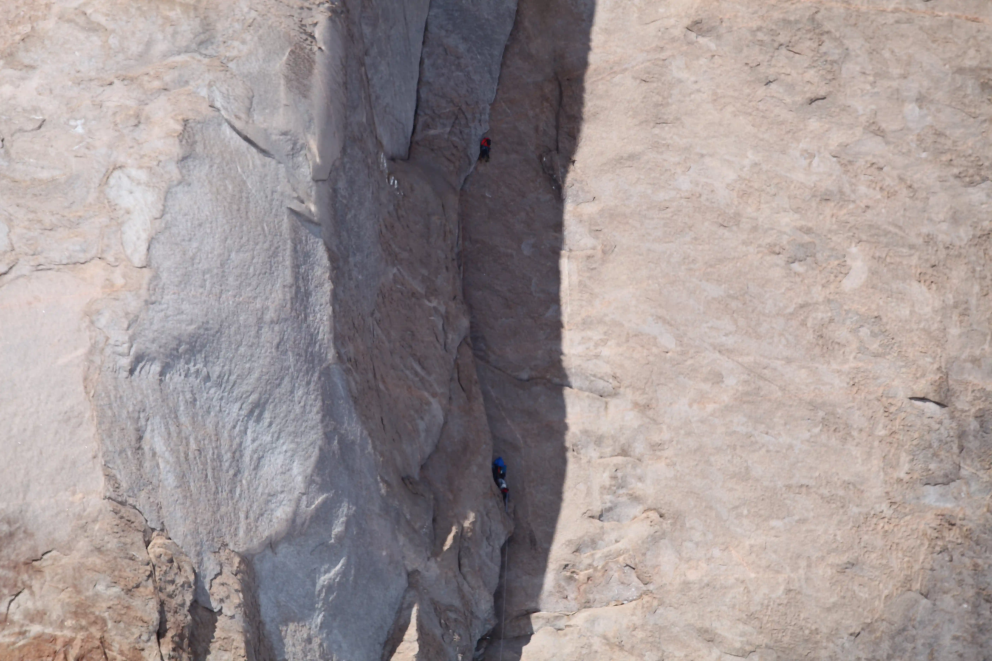 Hey Andy,
I have been struggling with something, and I hope that you can give me some advice. I have a trip planned to go to the Ruth Gorge this coming spring, and the partner I planned to go with recently decided to drop out. The problem is I don’t know anyone else who would be interested in doing a larger ice/alpine trip to Alaska, so I was wondering if you had any recommendations on how to meet good partners that are interested in climbing things that are notorious for being “suffer fests”.

Thanks in advance,
- John

People often ask me why I used to solo so much, Alex Huber (no mean soloist himself), even going so far to suggest it was some form of self-sabotage (two solo attempts on the Harlin must mean I don’t want to climb the Harlin!).  In reality, the reason for all these solo trips (Troll Wall, Alps, Yosemite) was that I either just couldn’t find anyone to climb with, thought my self too crap to climb with good people that might go, or did not trust those who were available to climb.

In the past, there was a small pool of climbers I could try and link up with (Ian Parnell and Paul Ramsden being the people I climbed with a lot), but as they got older they either stopped going on big trips, or work/family curtailed the number/length of trips, or they just wanted different objectives (for example after trying the Harlin with Paul he just said “I’ll leave this stuff up to you”, and switched mainly to high altitude mountaineering, as it fitted better with his life).

The pool of climbers has leagues, premier, first division, second etc., and once you begin to establish yourself in one league by some hard climbs, you might be able to find someone to play with.  Examples of this are young climbers like Calum Muskett or Tom Livingstone who in doing some hard routes (Divine Providence or Long Hope route for example), appear on the radar of older climbers, who think maybe they can piggyback their ambition on a younger climbers drive (Patrick Gabarrou is a great example of this, as well as Twid). The older climber takes, the younger climber on, and the younger climber picks up all the stuff they need to know beyond the purely technical (that mountain sense).

Age is not always a factor as Nick Bullock and Paul Ramsden’s partnership has worked out well, and although both are the same age, and both are hardcore in their way, Paul has a very wide mountain experience (doing it since he was a kid, were as Nick started in his 30s). This means both bring something to the partnership that works out, and often stuff that’s far removed and important than the purely physical.

Finding your partners often seems to be able to establish links early, say at university, and although I didn’t go to uni, almost all the great alpine climbers of my generation did and formed some very strong partnerships that way. Once they dispersed each would pick up new partners and these, in turn, would be added to the group, one member vouching for the new blood.

Climbing with strangers can be dangerous on single pitch crags so big gnarly routes it’s out of the question, but not if you do know something about them. For example, when I tried the Russian route on the Eiger I had never met my two partners until the day before we set off, but I knew Neil had climbed some really hard walls, climbed in Patagonia, while Ross had less experience had been in the Royal Marines and worked as a mountain leader.

There are also times when you climb with novice or less experienced climbers, but you act as the leader, and everyone understands that you’re in charge. Here you can push the young and talented harder than they would push themselves simply by being there. I did this the first time I climbed El Cap in a day, with two 19-year-old guys I just met at the base. They had the experience and drive but just didn’t see themselves as ready to climb El Cap in a day (we climbed Zodiac in 17h), when I did or was not too concerned if we just had to push to the top if we didn’t make it. If you feel you can carry a climb on your shoulders, leading every pitch, and take on apprentices, then this is a great way of getting on hard routes (for example Cedar Wright just asked about my route on Ulvertanna, maybe wanting to repeat it with Alex Honnold and Conrad Anker, a heavy-hitting team, when the route was climbed by the team who had pretty much never climbed before).

If you cannot find partners like this, then things can be tough. Searching through UKC is probably not the way for anything gnarly, but joining a Facebook group (like UK Big Wall climbing) might be better. The problem is often climbers have very little time and don’t want to take a chance on an unknown and risk the chance of that person being a logjam, or just being deluded (Yosemite is full of climbers who have teamed up with the wrong partner, who just folds on day one, or as soon as things get tough).

The one safe way to find partners is to go to a climbing hub for a long enough time to establish a small reputation (that you are not deluded or will be a logjam). The best place for this would, of course, be Yosemite, as living cheek to jowl with so many climbers makes this connection easier. Somewhere like Chamonix, Squamish, El Chalten, Boulder, Sheffield, Springdale would be next, but here climbers are more fragmented and in tribes.

Another factor is year on year, fewer people want to do ‘hard’ alpine climbing (as can be seen by climbers applying for MEF grants), so the pool is getting very small. On the plus side a smaller pool, combined with partnerships coming to an end (look how Leo Houlding’s partnerships have changed since Ulvertanna), means there are always others looking for someone to link up with.

And back to the solo stuff. Climbers like Neil Charlton and Shaun Warren Seemed to get onto the radars of other climbers by their solo climbs, and so free themselves up from all the hassle of people and all their drama, the most difficult aspect often of climbing.

As for me, coming off three months of climbing with another human, my solo days behind me, I just found a climber I liked hanging out with, who I trusted, and wanted to climb hard and then married her!