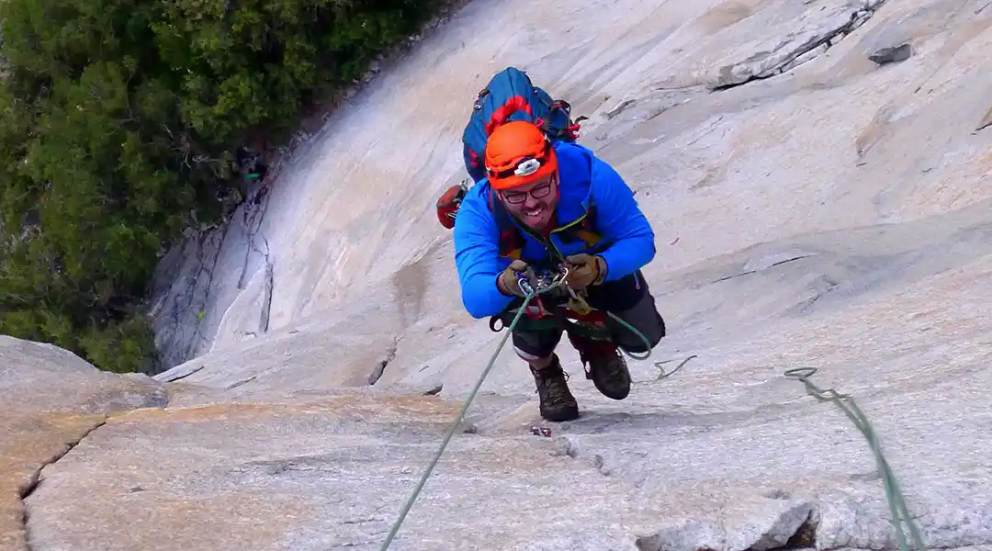 I’m staggering down in the dark and the dust, like really staggering, lowering myself over boulders I’d usually jump, feet feeling like bloody pulp, knees throbbing, each and every muscle playing its own little tune of pain.  My good head torch was dead, leaving me the backup, which had quickly faded to the effectiveness of a watch light.  Ahead a stronger beam darted through the interminable trail, a stronger beam half my age, Calum Muskett.  “Calum wait for me, I can’t see anything” I shouted, knowing how pathetic I was, but also aware I was so tired I was unsure if Calum was even his name. “Oh right” came Calum’s cheerful reply and he stopped and turned for a moment, allowing me to scramble down the most dangerous section of the east ledges, a loose scramble down unhelpfully black rock, which in the pitch dark made you feel as if you were falling already.  “What cheese do you feed to a bear to get it out of a cave?” asked Calum, sounding as if he had just popped to the shops for some milk, not lead every pitch but three on Lurking Fear in just 15 hours.  I didn’t answer, my brain too busy bleeding.  “Camembert”.  His humour was no antidote.

By the time we’d hit the car park my body had that numb buzz that only comes at the end of only the most ‘special of days, and sitting for a moment to get the stones out of my shoes I was aware I must hurry before my body seized up completely, and so stumbled on, reaching the car at 10 am, almost 24 hours since we’d left it.  I took off my shoes and socks and throwing them in the boot climbed onto the driving seat with all the care of a man with haemorrhoids and sat there a second before turning on the key, listening to my body throbbing.  Twisting the key the GPS came to life with a flash, a woman’s electric voice telling is what I already knew: “HERTZ”.

We had woken up at 3:30 am this morning below Lurking Fear, a route that most parties take three days to do, with 19 pitches of mixed aid and free climbing (5.7 A2F).  I’d never climbed with Calum, but as soon as I met him, only 21, I liked him straight away, reminding me of my younger brother Robin - only a welsh version (I would later call him Tim Emmett’s bastard child, but that was only after the descent).  He was a really gifted climber, having a tick list of gnarly Welsh rock routes that was both impressive and worrying in their scariness.  People had said that Calum may not be the strongest climber (he never trains), but he was one of the best when it came to controlling his fear.  When he’d cheekily said “Oh why don’t we go and climb Lurking Fear in a day” the previous morning, as I stood tired out from climbing the West Face of Leaning Tower in twelve hours the prevues day, well I couldn’t tell if he was joking, and neither could he when I said “maybe”.  I was already toasted after a 4am start the day before, along with jet lag that had been allowed to lag, and the idea of going on another speed mission was beyond stupid (and beyond me).  “I’ll lead everything,” said Calum, raising his ginger eyebrows.  He sounded like he was asking to borrow my car, and promising not to crash it.  “Oh maybe” I repeated, Calum’s girlfriend Gabby raising an eyebrow, no doubt signalling to me that he was not to be trusted (Calum had planned to introduce Gabby to Yosemite climbing by taking her on Southern Bell, perhaps the most dangerous free climb in North America).  Andy and Stefan, my partners from yesterday sat at the table looking up at me, waiting for an answer, and I felt that I had to live up to some image of myself as this hardman, that if I went it would be another notch in my climber’s belt; two walls, three days.  The idea was daft enough to tempt me, even though I knew I would have to suffer like a bastard to do it. “OK - I’ll see you there at 7 pm”.

Sorting the rack that night it was funny how confident Calum was, and dismissive of anything I had to say about what gear to take.  “We’ll just take my rack,” he said, dismissing Totum Cams and offsets for two sets of Camalots.  When I pointed out that his skyhook was threaded incorrectly he processed to point out that in fact, I was wrong, even though I’d probably hung my sorry ass from them thousands of times.  When I said he’d need two aiders and two daisy chains Calum replied he had his own system, using one aider (which was not fast, or efficient) and I decide to drop it.  It suddenly hit me that with Calum it was not a case of “Wow how cool is this, climbing a wall with Andy Kirkpatrick” it was “this old fat guy is going to belay me Culum Muskett up El Cap”.  There was nothing I could teach him, and any advice or hesitancy was only my weakness (“We need to take some brass offsets” I’d say, “Nah” was Calums reply).  I recognised these things in myself when I’d climbed with older climbers in the past, my heroes, that although they had an experience they had little wisdom I needed to hear, and that experience instead of making them bold only made them weak.  Now I was that weak old-timer reaching for insurance in cams and nuts instead of good old muscle and balls!

We walked up to the base in the dark, Calum setting a pace that had me sweating like a pig, each minute making me feel older and older.  Over the years I’ve come to understand that power flows between human beings, and that power can be taken and given, and also stolen. The day before with Andy and Stefan we had chosen an objective way beyond them, a grade V wall in 12 hours (or even 24), but I had given them some of my power, my confidence and self-belief, and we’d done it.  Now with Calum I felt the opposite, as step by step I felt my power flowing out of me and into him (not that he needed it). I knew I was fatter than I’d ever been before in Yosemite, but my self-image was like some obese golfer, not someone about to speed climb.  I tried to talk myself around, that all I had to do was hang on to Calum and it would all be OK, that even if I felt over the hill I was still going for a speed ascent.

The alarm went off at 3:30 am, and we quickly scoffed a bar each, drank some water and jugged a fixed rope to get a head start (a little know fact is that the first ascent of the Nose in a day - or NIAD - had the first 4 pitches fixed!), Calum going into the lead for the next seven pitches, climbing strongly, if a little handicapped by his single aider, but making up for it with muscle and sweat.  Watching him muscle up the pitch, taking twice as much energy as me for the same speed, I thought how weakness can be an asset, as it’s a trait of youth to throw the body as an optical, rather than the head.  I know it sounds condescending, especially to one so gifted, but I wondered if climbers don’t climb harder as they mature due to getting weaker, forcing them to think more about how to think their way up to hard routes?

By 10 am we had reached the pillar of despair, a sloping ledge they’d thought would be a great ledge on the first ascent, and I took over for the 4 technical pitches, pulling out my stash of Alien cams, offsets and cam hooks, the balance of power switching a little, as I tackled the easy but tricky aid climbing.

My mini-block over Calum slipped on his far too small rock boots and pushed on, me jugging behind with the sack.

Short fixing I finally caught up with Calum on Thanks Giving Ledge, where he sat crossed legged, Zen-like, while I toiled under the rucksack (jugging with 10 kilos of water soon loses its appeal).  Knowing we were just two pitches from the top I quickly started racking the gear onto a sling to hand over, eager to get to the top in the light.  “Are you leading the last pitches?” asked Calum with his usual cheeky way.  I doubt I looked too pleased with the prospect, as by now I really was just hanging on.  “Nah - best if you lead it”.

And he did, brilliantly, and an hour later we both stood on the top, watching the sunset.  I knew we had a long way to go, up over El Cap, down the summit slabs and the East ledges, a route that seemed as long and impossible in my fatigued state as the Nose in a day.

As I said in my last blog I’ve decided that instead of taking on impossible and unrealistic projects in the mountains,  I’m going to take on myself, to try and fix the parts of me that need to be fixed.  This year has been by far and away the best year of my life, and also by far the worst, and both these highs and lows are reflections of my demons.  I need to heal myself, even if the highs are not so high because I can’t take any more lows.  I’m making a plan, just like I would in order to climb say the Eiger in winter, to understand to difficulties I face, and how I can overcome them.  I have some ideas, including eventually giving this all up, getting rid of Twitter and this website, and finding happiness not based on what I climb or how I write about it, but this climb with Calum brings up one of my major problem, the way I perceive myself - my negative self-image.  I had just climbed two walls in three days which most people would be chuffed with if they have done them in two weeks.  Instead of making me feel invincible, it just made me feel weaker.  But I know that my perception of myself is only my own and the more I focus on them as truth, the more come true. We become our thoughts. What I had to focus on was not the pain in a body that suddenly seemed old, but the pain in a body that was young enough to hang onto this young tiger tail (no pun intended).

Of course, these thoughts didn’t come to me on that summit, but here in the Lodge cafeteria, as then all I could think about was how I would find the strength to get down as Calum switched on his head torch and sprinted off into the night.