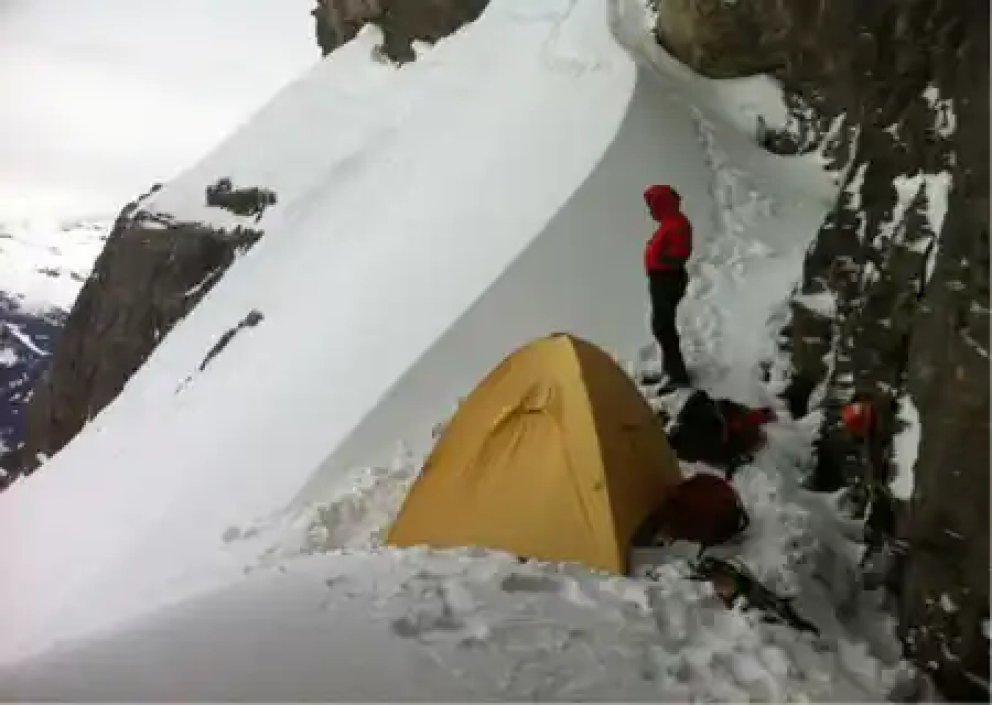 Sat in the hostel in Interlaken, having driven over from the UK yesterday.  The weather is incredibly mild, and it was raining when we arrived at 11pm last night.  The forecast is overcast tomorrow, snowing the day after, then steadily getting better the next four days (colder and clear).  The plan is to get the 6.40 train up and walk in from the Eigergletscher station at 8.10 to the bottom and try to reach the 1st band (crux) that day, leaving me to lead the crux aid pitches (4) through the band during the poor weather.  Alpine climbing is a bit like comedy and it’s all in the timing - so fingers crossed we can make it to the 1st band (one metre of snow on the approach, so that may slow us down).

We had quite a trip out here, starting from a fancy Hilton hotel at T5 Heathrow where I’d been working the night before.  It was a 6am start, an early trip over on the tunnel, then a detour as one of my tires started falling to pieces on entering france.

Neither me nor Paul speak any French (we’ve been coming here a long time, so you’d think we’d have picked some up), so trying to explain to le-quick-fit guys that I thought the tracking was out, or the bearing was gone, was a tough one.  I tried by saying ‘At le hundred kilometers maxim vibration’ (vibration spoken as vibrat-eon which sounded more French).  Having no idea what I was talking too I just pointed at the wheels and pulled a sad face, which seemed to work.  The problem was soon apparent when the car was lifted up into the air - with the mechanic saying ‘kaput’ - well apparent to him, but not me, as I asked if he meant just tire, the wheel, the suspension or the whole care?  ‘Kaput, kaput, kaput’ he said pointing at the tire, which I noticed was actually square on one side, which although improbable was obviously the cause of my problem.  140 Euros later (I bought two new tires as I was worried the other one may have been a square model) we were back on the road.

Can’t wait to get back on the mountain after my failed solo attempt on the Harlin three years ago.  I think the last year has been a year of not backing down from past failures - a sort of Alpine Club (of course the first rule would be not to tell you that it was… as well as the second!).

Keep telling people that being on the Eiger alone was an amazing experience, and quite strange, as I felt almost cozy up there, and safe upon it’s face.  I summed it up as being like one of those photos of a small child cuddled up with a pet lion, that the lion knows the child is no threat, the child knows the lion can kill him at anytime, but in that moment they live in the same space through some undefined understanding.

We’re taking 8 days food, and hope that’s enough, and Paul’s a bit worried by the size of the rack - me too - only I think it’s too small and he thinks it’s the biggest rack he’s ever climbed with!  Paul climbed the 1938 route when he was 18 (youngest Brit at the time), so at least he’s got all the gen on the mountain.  I guess climbing the Harlin alpine style requires a heavy weight/expedition approach to some respect, but there is still only two of us and one rucksack against a very big route.

As we’re climbing I’ll try and blog as we go to keep people informed.