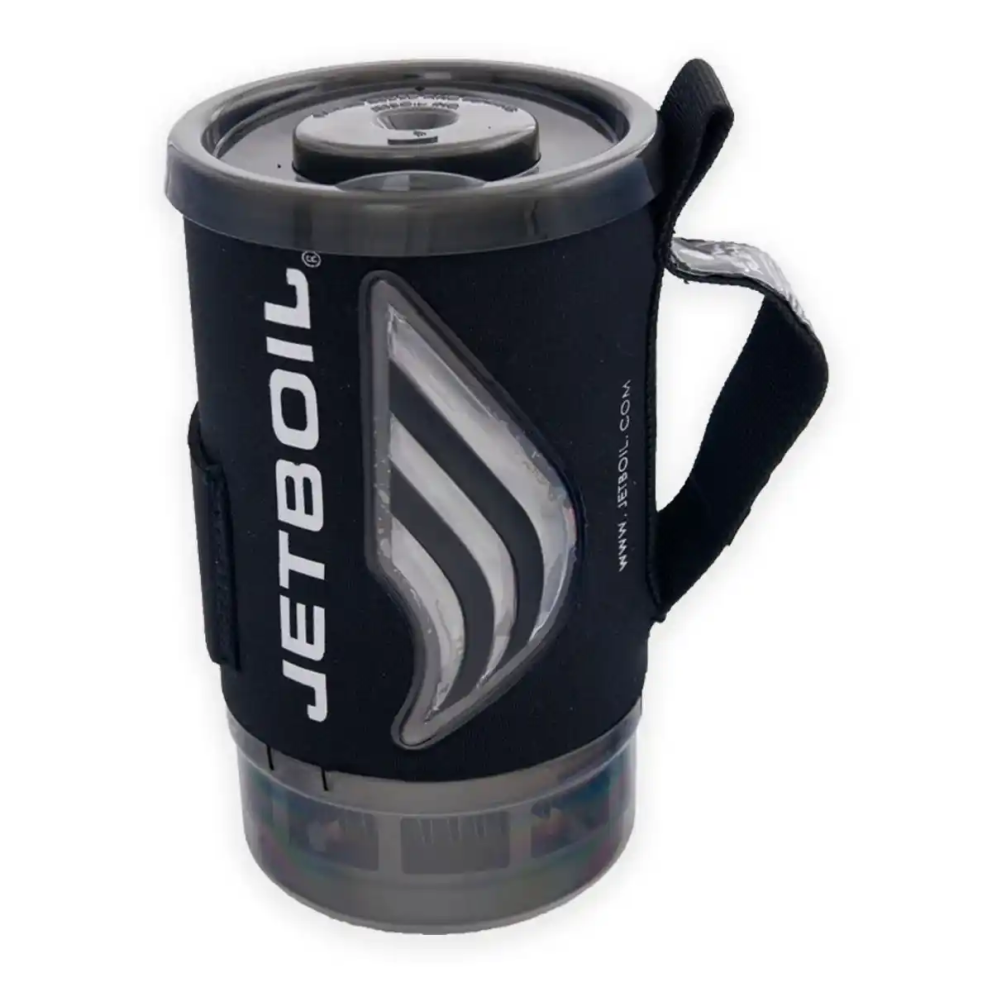 Although a few stoves have come along and looked as if they were going to topple it from the top spot spot (MSR & Edelrid), as yet no one has yet been able to topple the Jetboil from it’s spot as the number one wall stove for climbers.

When I say ‘wall stove’, I do so in order to differentiate it from a ‘mountain stove’, as a mountain stove is different beast, designed to work as the backbone of any trip, cooking everything from boil only food (heating water), to Michelin star quality feasts (frying, boiling and even working as an oven).  The mountain stove also has to be 100% reliable and work - often with crappy fuel - hour after hour and day after day, meaning a robust design where the strength isn’t compromised for weight.

A wall stove on the other hand - be that big wall or north wall (i.e. hot or cold) - is really just a kettle - designed to simply heat water, with weight, strength and function being balanced to the extreme.  Anyone who doesn’t grasp this will no doubt be highly disappointed with their Jetboil, well that is unless they actually enjoy burnt food.  I.e. Nothing should ever go into a jetboil but water.

The Jetboil has been around a while now and has been used on just about every hard mountain route in the last 5 years.  The main thing that disappoints people about the Jetboil is that it isn’t as fast as they would like, after all, what we want is some kind of Star Trek stove, where you press a button and you get instant hot water - or chicken Tikka Massala.  I used to have a stove like like - well it boiled water fast -  a home made job (titanium pan and MSR Superfly burner) that had water boiling in less than a minute.  It was also great at heating up a tent or bothy bag, downsides being anything that touched it melted (Ian Parnell’s £400 Arcteryx jacket being one notable casualty).  The problem was the more heat you pump out to heat the water, the more that’s wasted (hence a sauna style atmosphere when cooking).  The jetboil, on the other hand, is a cold customer on bivys, in fact it’s efficiency shows in the fact you can hold it when cooking (Ian Parnell even has a picture of him cooking INSIDE his sleeping bag!).  What the jetboil does is hold onto the gas, after all, what’s more important; a brew 2 minutes quicker, or a brew 2 days later on the same can of gas?  This is, of course, the way to go; efficiency over speed, as no one’s ever bailed from a route because their brew took an extra few minutes, while many have had to once the gas ran out.

Anyway the one thing that the Jetboil needs before heading out on to a wall is a bit of a makeover.  First off you need to hang it, and although jetboil have a hanging kit, a much better option is to make your own.

The first jetboil hanging modification I made was to just drill two holes in the rim of the pan and string it with wire, but the drawback with this is that unless you get the holes lines up correctly, when pouring, you get water dribbing out.  Hence a better system was needed for rigging the stove.

And so my latest jetboil has a single wire that’s swaged on opposite sides of the bottom of the pan, and is held in place by a wire that runs around the body of the pan and swaged where it intersects the suspension wire (all wires are held behind the pan cover).  To finish off make a loop at the top with another swag and insert a split keyring ring as a clip point.  This is done so that if one swage comes apart you won’t loose your stove.  A single loop hanging cable is great as the stove will balance much better when not hanging down straight (say on a snow slope).

Further modifications that are worth adding are when cutting the wire and adding the swages (these can be bought from ships chandlers btw) add an extra swage.  Once set in place, make a cable that holds the pan lid, and so stops it from getting dropped/lost and swage this to the suspension cable (it should set so the lid will hang down the side when not in use).  To connect the cable to the lid, simple crimp a swage on the end of a length of cable, and making a hole (or using one of the existing ones) thread this through it, so the swaged end will be under the lid (inside the pan when the lid is fitted).

Extra adjustments that may be worth considering:

The new sparker fitted to the Jetboil is a big improvement over the old one, but even so, you can depend on it, so other lighting sources are needed.  A flint and steel are by far the best (works wet or dry and won’t run out of fuel) and this could be swage to the burner so it’s never lost/forgotten.

Some climbers point out that it could be possible for the burner to become detached from the pan when hanging, perhaps leading to it getting dropped.  To overcome this you could create a cable that runs from the burner with a tiny wiregate accessory krab on the end, that clips into a loop formed at the bottom of the suspension wires.

NOTE: Any of these modifications will of course invalidate your warranty.