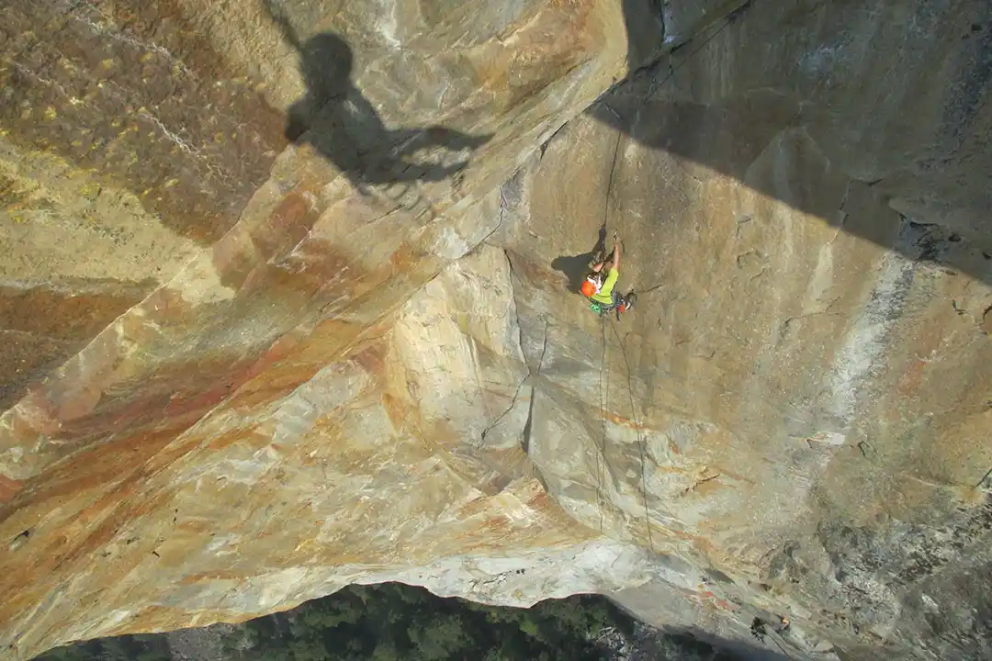 I often wonder if the term ‘speed climbing’ is unhelpful, as it lends some element of competitiveness, eliteness, to an aspect of multi-pitch rock climbing where it’s not warranted. To speed climb you need to be a speed climber, a rock climbing Green Beret, someone who’s ‘never spent a night on El Cap’, who climbs a wall faster than some people climb a pitch. The picture here was of a one day ascent of Leaning Tower in Yosemite, a route we did in about 12 hours, starting in the dark, and being back at our car in the light (all speed climbs must finish with a Pizza, so you must hit the Pizza deck before it closes otherwise you don’t get a tick). I had only come over to Yosemite for a week, to do a slideshow for Facelift, and ended up packing in a lot. One the first day I tried to solo Leaning tower in a day and ended up bailing where this picture was taken (I was pretty much there), when the sun hit me, as I was afraid I’d get fried (rapping Leaning tower on your todd is a good exercise in itself). The following day I came back with Cherry and Stefan, who I’d just met in Camp 4, and we climbed the route, then after a day off I climbed Lurking Fear in 14 hours with Calum Muskett, leaving me a day to get ready for my slideshow, after which, I jumped in my hire car and floored it back for a 5 am flight from San Fran (taking several naps along the way!). Now I’m no speed climber, no Green Beret, but I’m not bad at getting on with things, prioritizing the leader to be leading, keeping that train moving. No, we didn’t break any records, but we got shit done, and anyone could do what we did if they were just a little motivated. And so I’d like to propose an alternative, a mortal variation of speed climbing, something entry-level rather than aspirational, something anyone can do, something called JNFA climbing*. *Just Not Fucking Around