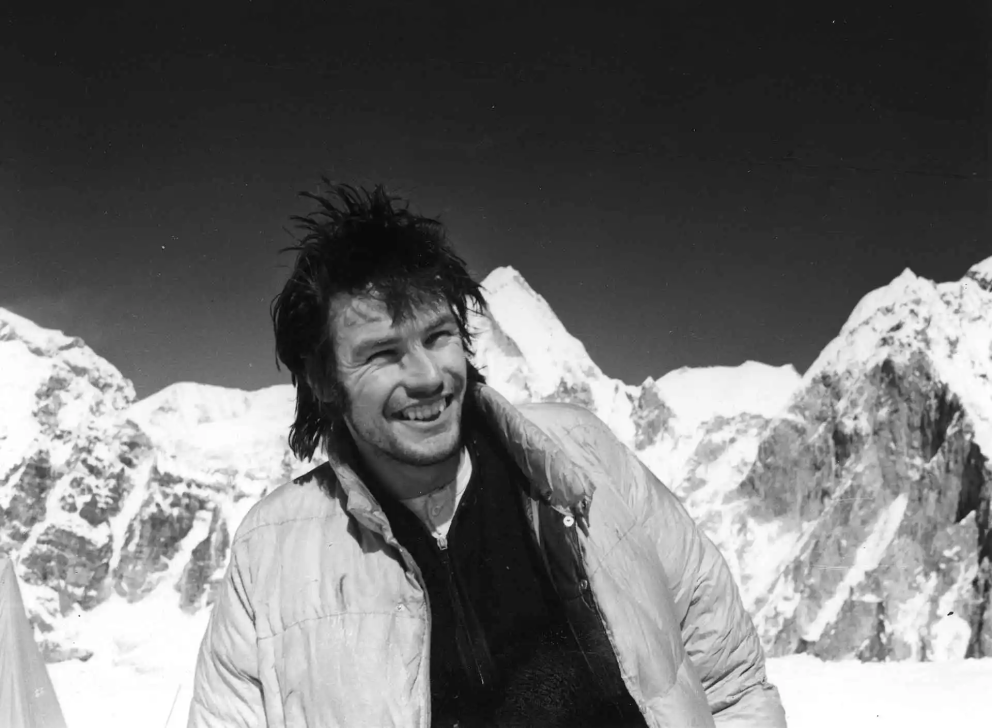 I seem to write quite a few obituaries on this site, or blogs spurred on by the death of people I once knew.  One thing I think important when writing such pieces is to respect the truth of someone’s life, to not get all misty-eyed and emotional, to tell their story as you knew it, the good and the bad.  What’s the point of writing it any other way, a life more nuanced than the verse inside a card of condolence.  It’s how I’d want it written about me, and I think in this case it’s the way he’d like it written.

I first met Ken Wilson on Stanage sometime in the ’90s, out with the ‘Tuesday nighters’, his voice echoing down I carried my bike up the hill after work.  It was summertime, the heather dry, the ferns flat and brown, yet Ken was dressed in blue fibre pile salopettes, so old most of the fluff was on the outside, but which Ken assured me was ‘worth a grade’ on the grit due to their power of adhesion (E10 climbers take note!).  Ken did not strike a dashing figure, looking a little like a climbing Stig of the Dump, his gear in no better shape, rack you’d find in a scout group jumble sale: karabiners as large and clunky as shackles, seagull bashers down to his knees, the antique collection hanging from a white and once orange Troll Whillans harness.  Ken intimidated me, and I was shy back then.  He was the type of man who loved to test people to see if they were worth the effort of knowing, a trait that rare these days, most people passive to each other.  Not Ken Wilson. Ken was a zealot, a gatekeeper, an agent provocateur, a custodian, a shit-stirrer, a loud and shouty man.  He was also generous and funny, a man who took the time to take the time.  He would apply pressure to you, press down hard, not to bully, but to see what you’re made of, it that time was worth taking (he was a busy man after all).  Ken was an all-around pain in the arse for fence-sitters and those in search of an easy life, the shoulder shruggers, the wishy-washy, the ‘not bothered’.  All this I knew before I ever met Ken because of Ken’s reputation, a man always there for UK climbers, his name embedded in the rock of climbing.  Yes, I already knew Ken Wilson because, like the sound of his voice, his reputation proceeded him.  But the real Ken did not disappoint that night, the stories, the craic, the taking of the piss from this raggedy man.  I didn’t speak to him that night, way too intimidated I guess, not yet up to it or worthy, me just a shop assistant, Ken Wilson climbing’s own Norman Mailer.

I bumped into Ken many times after that, and as my stock rose Ken began to notice me, began to integrate.  I would ring him up to have a chat or ask him something, his phone manner that of Stalin, no hello only an abrupt and loud ‘what?’.  Looking back I wonder if this was another Wilson test, his manner scary enough to make many a tire-kicking caller end the conversation right there.

One of the most important pieces of advice I ever had was from Ken, telling me that “Make sure your book is as perfect as you can because once it’s out there in print you can never get it back”.  It’s a tribute to Ken, and his vision, that many of the books he edited are still as good today as the day they were first printed, but then I think Ken was a man who always played a long game.

As I got more into writing I think we entered our difficult period, me desperate for his thoughts, good or bad.  After reading a piece I wrote for a now-defunct Mountain literature festival I chased after Ken, wanting to know what he thought.  But Ken for once was not forthcoming, more damming than an ear full.  I never knew why, but perhaps Ken was human after all, and just didn’t want to hurt my feelings, maybe not realising the writer I was simply scar tissue anyway.  I know it’s in my character to play not to those that clap and cheer, but to those who don’t.  Ken was someone I wanted approval from.

I got the odd email from Ken, ranting about this and that, asking what I thought, a ‘youth’ in his eyes, someone who was on his side, but never really anything about words.  He’d send me pictures of people drilling bolts, rant on about the emasculation of adventure.  I think one reason why I failed to solo a new route on the Troll wall was due to the fact I’d never learnt how to place a bolt out of respect to Ken.

I had to wait a few years for some feedback from Ken, coming after winning the Boardman Tasker for Psychovertical, Ken basically saying that the book had been written by my Editor Tony, the ‘kingmaker’ as Ken called him.  I don’t know what I said in reply, maybe I sent him my draft of the book, or maybe I didn’t reply, but it broke my heart.  Ken did not hold his punches, but this felt too cruel and unjustified.  Looking back with hindsight what Ken said was out of character, a master playing a bad hand.  Perhaps it betrayed something that had nothing to do with words, or maybe that’s my excuse.

After that, I kept my distance from Ken, stung a little, but also questioning if Ken was right, that Tony had conjured the spell that made that book magic.  Such thoughts as this is why I started to solo, to know it was all down to me, but with writing it’s not so easy.  Instead, I stopped emailing.

The last time I saw Ken was in 2007.  I had driven a hundred kilometres to visit Randolph Hurst’s mansion on the Pacific coast after climbing El Cap with Karen Darke, Karen unable to go to the house due to ‘too many stairs’ after just doing 4000 pull-ups.  And there was Ken, in the flesh, it bit older than last time I’d seen him, and who looking at me quizzically for a second asked “Andy Kirkpatrick, do you work here now?”.  It was a funny story once.  But not anymore.

No one who ever came into contact with Ken Wilson, or Ken’s books, remained untouched, and I suspect his death yesterday will bring forth a great deal of love, admiration and stories for this gloriously difficult man (“all great men are difficult”).  I also suspect there are many out there who once imagined they didn’t like Ken, (to not be universally liked is a tribute I a man’s character), but who on reflection will miss him dearly.

So what is Ken Wilson’s legacy?  Was he a great man?  Well, I think so, someone who’ll never be truly gone until every last copy of Cold climbs or Extreme Rock rots away. Ken’s Wilson was British climbing, he set the tone.  Ken will be best remembered for the bolt wars in the ’80s and ’90s and was often the last man standing in the argument.  He became to many a man who symbolised outdated tradition, reactionary and outdated.  I think at the time Ken was up against both generation X who only wanted to be as good as the French, and the baby boomers who were happy to forfeit heritage and principal in order to stay as good as they once were (Dick Turnbull called bolts the ‘Viagra of climbing: it let old men still get up’).  Ken fought tooth and nail against bolts, and who knows what would have happened without him.  As it was Easy Jet introduced flights cheaper than a pitch of bolts and the problem left for sunnier climbs.  So was Ken right?  I think so.  I saw Alex Honnold talk a lot about the need to bolt more, that it’s “up to people to choose if to use them if they want”, that he “just wants to go climbing”.  With a voice like that, with no Ken to fight the side of reason, who knows, maybe the argument will come back once again.  Who would take up the fight?

Personally, I think Ken was no reactionary, he was ahead of his time.  Alex is as wrong to lobby for more bolts, as wrong as Mussolini was when he wanted to fill in the canals of Venice with concrete.  For me, the biggest argument against bolts is that rock is a finite resource, the routes we have works of art.  Bolting them is the fasted way to destroy them, like the thousands of routes now dead from polish all over Europe that will never come back.  Ken held his guns and I think European climbers may well come to see him not as a reactionary but a visionary.

What I respected most about Ken was that he never disappointed me, from that first moment I met him, there on Stanage in his fibre pile pants, till the last in Randolph Hurts mansion, a fitting place to say goodbye to such a man.  To talk to Ken was like combat, like landing a Hemingway sized fish, unsure who was the fish and who was the fisherman, no meeting anything less than refreshingly stimulating, even if it was the equivalent to a rub down with sandpaper.  It was a privilege to have known such a man, to have had the laugher, the wisdom, and the hurt.  What I respected most about Ken Wilson was that Ken was always exactly that, sometimes more but never less, the Ken Wilson.