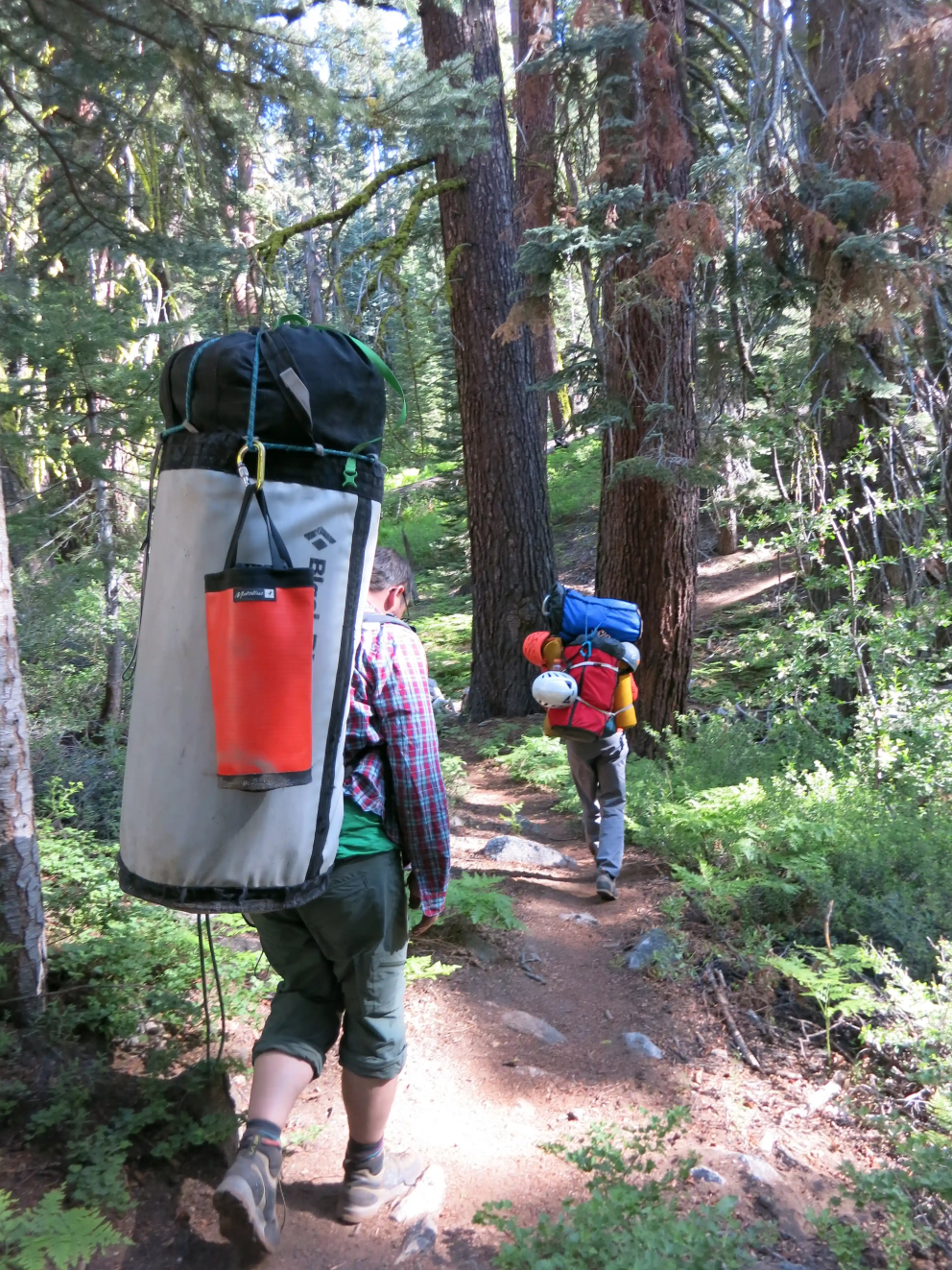 Reading through the books that detail your adventures, huge loads being carried seem to show up everywhere.
How are your knees and/or back? How do you take care of them? Any advices on how to abuse them but still keep them working far into old age?

Wow, that’s a loaded question (no pun intended). Many people will have strong opinions on knee pain; something they struggle with every day; restricting what they can do; stopping them from doing what they love.

I was lucky, in that growing up, I met quite a few older climbers with knee troubles, something they put down to carrying too many heavy packs up and down too many mountains. My dad, who was a climber, also impressed on me his switch from carrying as heavy a pack as possible (ego plays a part in this) to go as light as he could. It was also a time (the late ’80s), when climbers were switching from 70-litre packs to more ‘alpine’ 45 litre or smaller packs (like the Karrimor Hot Ice and Berghaus Ice Star became the ideal pack over the older ‘Haston’ pack), meaning they carried less. The ski pole appeared for walking and mountaineering (again, the late 80’s), which was lead by European guides trying to save their knees (my dad was a team leader of an RAF mountain rescue team, and I can remember seeing people using standard - non-adjustable - ski poles in the 80s).

So knees always seemed to be a thing back then, so from my teens, I always took knee care seriously.

What this translated into was, first of all, I had a lot of respect for my knees; yes I sometimes asked a lot of them, like piggybacking a 70kg person all the way down from the top of El Cap, but I never took the piss; never carried big loads for no reason and always tried to travel light; used ski poles when I could;  ferried loads over a few trips when possible. I treated my knees as if I was an old man with bad knees in order to never become an old man with bad knees. Yes, it looks hardcore carrying a big load, but you have to remember that I was often only asking my knees to do that for only a few days a year (this is one reason young guides do all the donkey guiding - going up and down high mountains - while old guides focus on ski guiding in the winter).

The biggest factor in knee problems is obviously osteoarthritis, which seems to be genetic, but in my experience, the biggest factor is actually avoiding injury, because as soon as you get a knee injury (ACL etc.), yes you can get through the short term issue, but then later it comes back to haunt you (which results in new knees in your 50s).

I once met a guy in Alaska who’d caught dengue fever in Asia, who told me it was like every injury, every broken bone, coming back to haunt him, and I think knee pain in later life (starting in your mid-40s), seems to be very much like that.

I’m very lucky in that I’ve always avoided sports and activities that damage knees, so have avoided pathways to later pain, such as football, running, mountain biking and skiing. Yes, I do go skiing and run, but I’m extremely careful about my knees because running and skiing - although great - are not what my life is about. So just as I never jump down from things like others do (jump down off boulders when descending a canyon for example), but get on my ass and climb down, I don’t expose my knees to undue stress, or the chances of injury for little gain (I don’t want to destroy my ACL showing off).

A second factor for me, why I have healthy knees at 48, is that I picked up a pretty debilitating back injury in Patagonia in my mid-30s (I was going on adventures with a paraplegic girlfriend, and so I did a lot of lifting), and this exposed me to real pain and incapacity for the first time. The result of this was I really upped my game in terms of strength training, which has resulted in increasing my knee health, but also reduced the risk of a knee injury, as my knees and legs and frame (everything is connected) are just more solid and stable (instability is a huge factor in many injuries).

I know Dave MacLeod dismissed gym-based training for climbers, lifting weights etc., but when you see pro athletes working out it’s not to get strong, it’s really to avoid injury. For this reason alone I’d always recommend some kind of strength training, ideally, every day (buy a 16kg kettlebell, stick it by the bed and do a set of goblet squats every evening before bed), or a couple of sessions a week, focusing on the deep squat and the deadlift (get someone to teach you how to do it right and build up slowly to avoid fucking your knees up in the process!).

I also recognise that the human body is actually designed to be pretty lazy and sedentary much of the time (go hang out with an African tribe to see it in action, there’s a lot of not a lot going on), that we hung around in trees waiting to climb down and crack the marrow out of the bones of carrion. We’re not designed to be doing Iron Mans every six months (maybe only once a lifetime), or training every day like a pro athlete. In the past, we wore our bodies out like we wore out our horses, that by the age of forty you were fucked and would be dead before you reached old age, but now, people are still very active in sport until the age of 70s due to much easier lives, but not if they’ve worked in a foundry all their days!

There’s a saying that ‘Hard work kills horses’ which applies to knees as well, so I’d focus on looking after your knees by avoiding anything that can injure them, as it seems to be a pathway to later pain and osteoarthritis, but also to look after them by making them strong and stable. Invest some time on your knees and remember that line from Wear Sunscreen ‘Look after your knees, you’ll miss them when they’re gone.