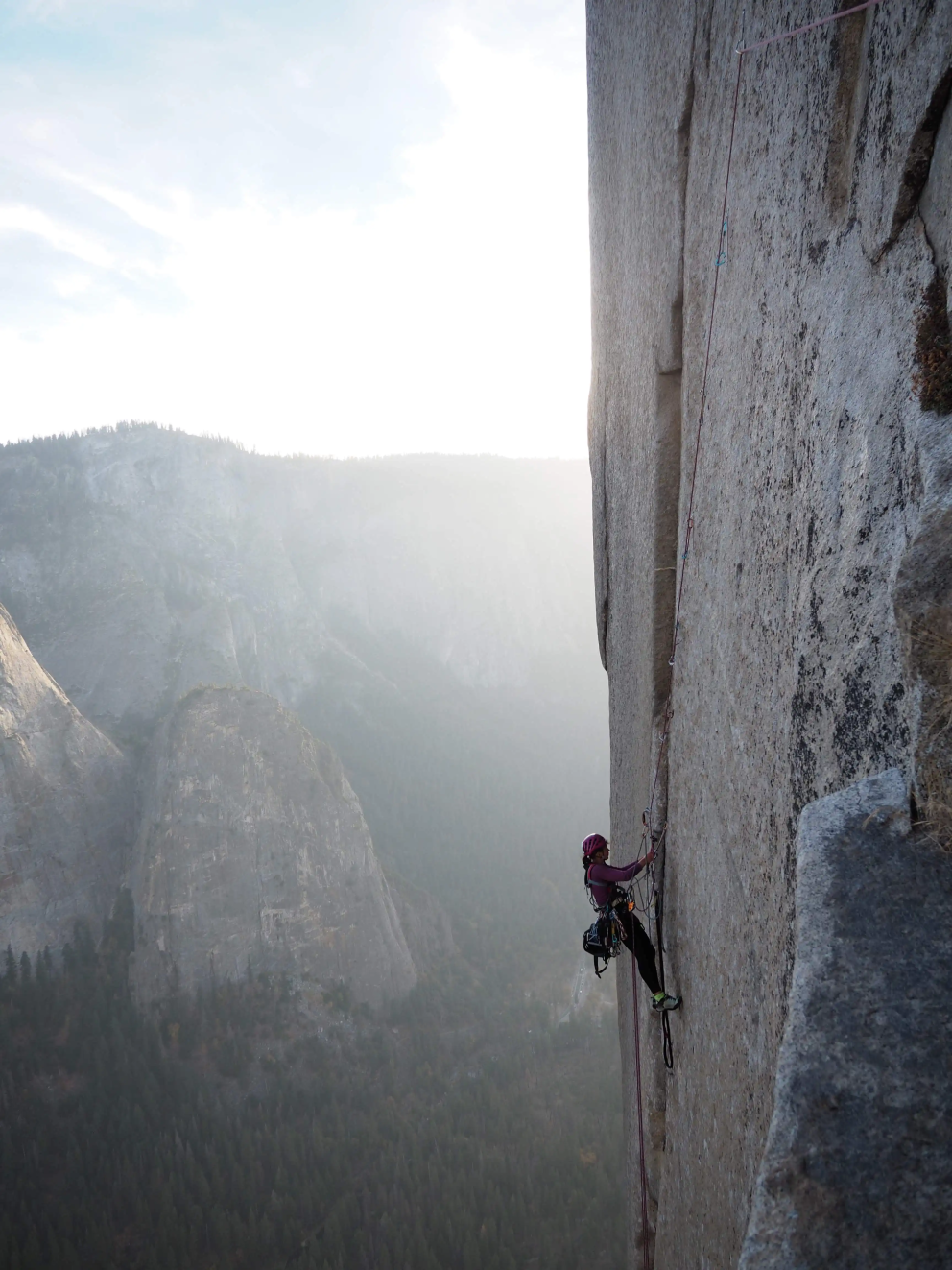 Reader of the blog since I started climbing over 10 years ago and always a source of great information.

Current daisy chains are gone the way of the dogs and wondered whats now the best going forward, something like the Metolius PAS or Petzl Connect Adjust?

Only downside I can see to the Connect is that you can’t use it to extend your belay plate while abseiling (something I do very often) and might be too cumbersome having two for aiding.

Interested to hear your thoughts as guessing you’ve tried both ways!

Having used just about every lanyard on the market just about, here are my thoughts.

What’s A Lanyard For?

This might sound like a dumb question, but I see a lot of people with lanyards clipped to their harnesses who seem just to be copying what other climbers do, and so don’t get the most out of them.

So here are some uses and issues:

Is A Lanyard Worth Carrying?

The art to most things is the removal of complexity, taking away all the stuff you don’t need until you can’t take anything else away, and so, as everything covered above could be achieved using your rope or slings, the answer should be ‘no’. But the weight of something like a Petzl Connect is only 125 grams. When this is considered alongside its functionality, we get more ‘function’ than ‘unnecessary complexity’ in my opinion. Yes, you could use slings and rope, but such a piece of gear as the Petzl Connect offers a great deal more - especially in terms of safety - than adapting other gear to work.

What Kind Of Lanyard?

I’ve seen a huge increase in the use of lanyards. Once you’d see the odd person with a daisy chain clipped to their harness, but now in some countries (the US and Australia) it seems like at least 50% of climbers are using some lanyard, and I’m told UK sales of the Petzl Connect are very high, so they’re now a ‘thing’. But which one to go for?

These would include Yates and Fish adjustable daisies (they’re not daisies), but are primarily for aid climbing as they can be released when fully loaded. Their weakness is that having a sling passing through a cam creates a weak point, which in theory means the sling can get chopped by the buckle, and so are unsuitable for life support. Saying that I’ve taken several factor two falls on these lanyards and lived to tell the tale, but I would still class these as big wall gear.

The old school classic, made by BD, Fish, Metolius etc. These are just sewn versions of knotted slings, but unlike knots, bar tacks can break at light loads (they can break when bounce testing). Yes the sling itself is 100% safe (well, for a sling), but mistakenly cross clipping the sewn pockets can leave you unclipped, and adjusting the length often creates issues for inexperienced (and experienced) climbers. Personally, I think the standard daisy has had its day and probably needs to stop being sold, having been replaced by the link style sling.

This comes under many names, but the Metolius P.A.S (Personal Anchor System), was the most common one for a long time (now BD and Grivel ones are equally as common). The use of linked nylon or Dyneema loops removes the danger of cross clipping and means the link sling is ideal for life support. The drawbacks are that you must add extra elements into the sling to adjust the length, and the sling can be a little untidy on your harness. Many climbers run the sling between their legs when racking, but I find this worrying, as having the sling catch in a fall could be quite injurious! But if you clip it around your waist, to the back of the harness, you tend to end up cross clipping gear into it by accident as you rack, meaning you cannot use it without unclipping multiple pieces of your rack first.

The best way I’ve found to rack link slings is on the very front of my racking loops, but this is still not ideal. One issue people bring up a lot is the fact you larks foot these slings to your belay loop (don’t go through your waist and legs EVER as this just means your harness is constantly under tension like you’re hanging in it when you’re not). Bedroom climbing theorists will tell you never to larks foot a sling, which is true in a laboratory, where you have an 80 kg steel weight dropped onto a 120 cm sling at factor two. But in real life, the harness and human body are pretty good at taking the sting out of such falls, so larks footing is permissible, and is much safer than clipping a sling in with a locker.

I’m ignoring all the non-adjustable rope lanyards here, and I’m covering just the Petzl Connect Adjust and new Camp Swing, lanyards that are both adjustable and dynamic. For me, these are the ideal lanyards, as they’re both simple, very strong (stronger than webbing), robust, and adjustable (15 cm to 95 cm in the case of the Petzl Connect). There is no published data on strength, but I suspect these are in the 14 kN range, with the weak point being where the rope is compressed by the karabiner. As you mention, this style of lanyard looks like it would be harder to use as a rappel lanyard, but I just clip my descender into a clove hitch about 30 cm along from my belay loop (the Dual Connect Adjust gets over this problem by having two lanyards, but it’s just extra stuff you don’t need). As an aside, if I’m not rapping far I use a locking draw (20 cm express sling with a small locker on the end), and clip my device into this and just the Connect for clipping in and out with.

The one thing that needs slight mod, is you need to add a small loop of cord into the end of the lanyard (through the eye, or by adding a small Prusik loop), so it can be clipped off, allowing the lanyard to be clipped off in three loops (you don’t want the end to trail). I also find that as the rope is thicker than a link sling, its harder to cross clip into it, and so being clipped into the rear of the harness works ok (again, I’d avoid running it between your legs).

With all sling types, you should avoid either taking factor two falls onto a lanyard, but with a rope lanyard, you stand a much higher chance of nothing terminal happening, the same applying to holding a factor two fall.

At the moment my big wall rig is the Petzl Evolv Adjust tied into a Petzl Micro Swivel connected to a belay loop on my harness (I have two belay loops), using a much longer length of 8.5 mm rope. Connecting it via the swivel means it never gets tangled and allows me to get much tighter to my pieces (the Micro is attached via Allen key). If I’m climbing something very hard, I’ll add in a P.A.S sling, as being able to carry out hard, non-dynamic, bounce testing via your lanyard is vital (I have it clipped out of the way most of the time). The longer rope on the lanyards is vital when top stepping and stepping down to test and can allow you to be clipped into things you don’t want your rope to be clipped to (vital when faced with sharp or loose rock). For speed climbing or easy aid, routes like the Nose, I use a single standard Petzl Connect and one aider (Metolius Pocket Aider) and use the single aider method (see it in Higher Education). You could use two Petzl Connects, but I think this might be too bulky.

The main drawback of the Adjust is that it cannot be released easily when fully loaded, which can be handy on roofs or awful squeeze chimneys, but its benefits far outweigh this.

One last note is that I’d replace the rope after four or five walls as the sheath eventually breaks apart.

I think this kind of lanyard use will not be adopted by old school climbers, who probably don’t want their harness having even more clutter added, but for newer climbers, especially novices and those transitioning from climbing walls, they offer tons of easy benefits with very few negatives. For big wall climbing too, they’re great, and most climbers are going that way slowly. As for whether to go for the PAS or the Petzl Connect Adjust? Well, personally, I think the dynamic properties of the Connect make it an easy choice.