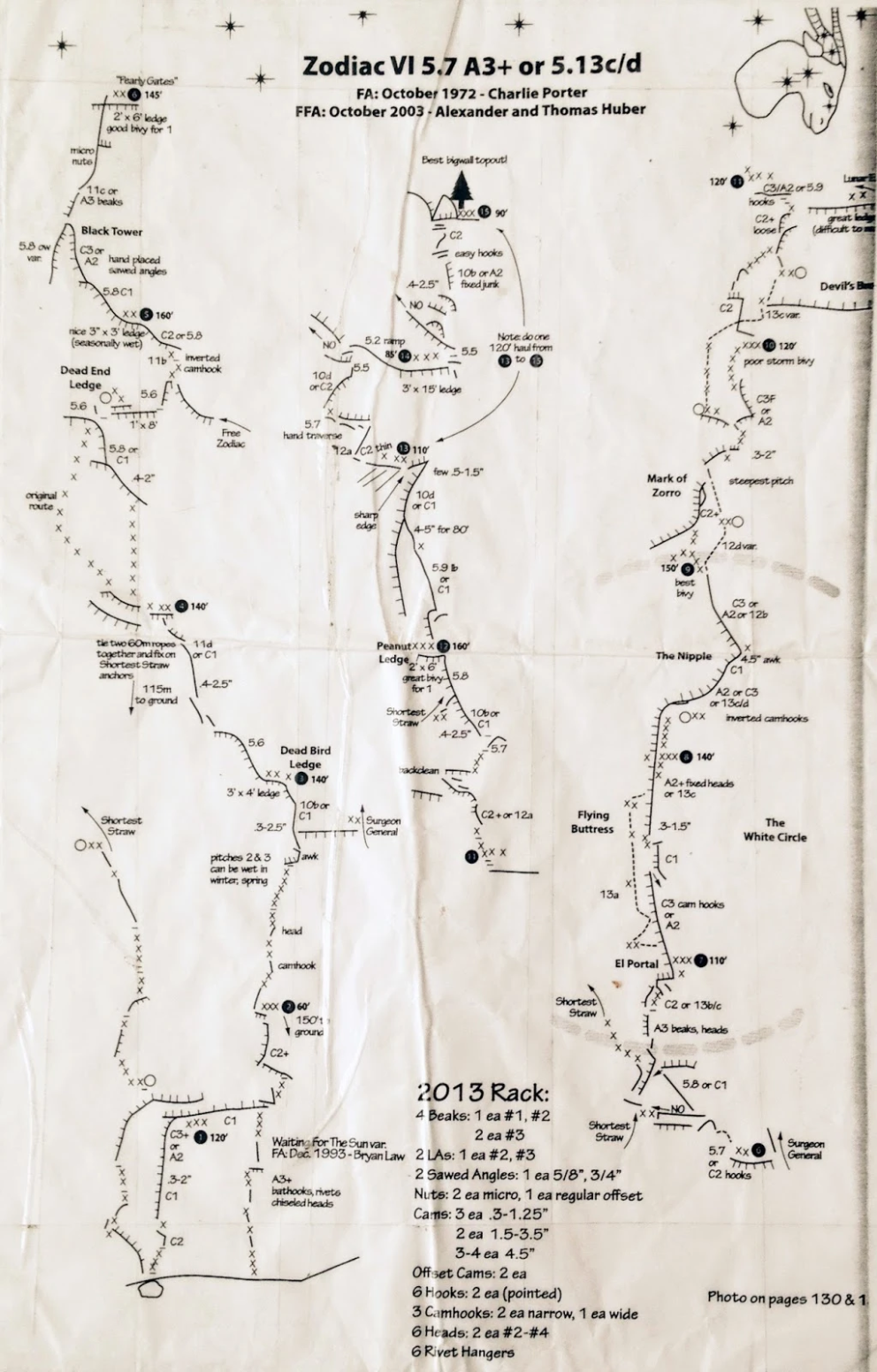 Letter from America: A short fix

Well, a week has passed since I arrived in the valley - a week which has seen little traffic on ‘the captain’ - and a very hot week (up in the ‘90s), but thankfully - and after many false starts - I climbed zodiac in 19 hours (with one pitch fixed).  Unfortunately, this wasn’t a solo speed ascent, but with two young Californians; Jordan and Adam.

The story begins when I went back up to do a two-day solo ascent of Zodiac, both to get reacquainted with the route, and also to calm my nerves about setting off up the route with just 3 litres of water, one rope and a small(ish) rack.

I set my alarm for 3 am (continuing my vampire style) and settled down in my usual sweaty mozzie hell (it’s so hot at night you could sleep naked - but if you did you’d end up looking like the elephant man once you woke).  At about 10 pm I heard something messing with my gear and let out a big shout - imagining that it was a bear, only to hear two voices asking “what was that?”  Half asleep I thought it might be Leo Houlding messing with my gear as a joke (supergluing my krabs shut, sticking my lip salve up his bum - you know - the usual).  Then I realized someone was shining a torch in my face, probably thinking I was a dead body.  “hello” I said (probably looking a bid odd, dressed in all my clothes and with T-shirt wrapped around my head).  “Oh sorry” came the reply and the torch disappeared.

At 3 am I crept past the two climbers and set off up my fixed rope.  They obviously had their sites on Zodiac as well, and seeing them laid there in their bags I felt jealous of their partnership, sharing the work, and the fun.  When you spent a lot of time by yourself (climbing or touring) you realize that the value of most experiences comes from its sharing.

Arriving at the anchor I set about kitting up, then realized one of my aiders was missing.  I must have left it on the ground.  The thought of rapping back 50 metres, getting the aider and jugging back up felt like too much - when in fact it would take just ten minutes.  I thought about this, and how my margin of psych for this task must be so thin that even this little set back was too much.  All I wanted to do was bail and go back to sleep.  There could be no forcing it, after all if it was tough now how tough would it be in twenty-plus hours?  To solo El Cap in a day would require by greatest level of psyche and energy I could muster, and right then I had either, so went down.

Waking in the morning I had a chat with Jordan and Adam - the climbers who’d slept at the base - and would it transpired were young enough to be my kids.  They did indeed want to climb Zodiac and had already climbed the Shield earlier in the year and exuded that amazing excitement in big wall climbing I’d had when I’d started.  The problem was they were also having a lack of psyche, realizing that they would have to climb the wall in two days (Zodiac generally takes 3 or 4) because Jordan had to be at work.  Like me they had grabbed their opportunity to do something amazing, only to find that they were now feeling it was beyond them.

I could tell that their climb - like mine - was hanging by a thread, and tried to help it along by giving them some beta, then we had a long conversation about dry ice, with Adam telling me - like some proto terrorist -  how you could use it to make things explode.

These guys had a very positive attitude, and easy manner was intelligent and both had a good sense of humour.  I’d only known them for 30 minutes when I put forward the idea: “Would you fancy teaming up and climbing it in a day?”  Someone who isn’t a climber would find the idea of climbing El Cap with two strangers as a bit odd, but I saw in these guys myself at their age and reckoned it would work.  And it did.

Setting off at around 5 am we sped up the route and working as a team would climb many walls; everyone climbing fast and safe.  The only worry was when I started to think that our two largest cams (new DMM 4’s) were too small for pitch 15, which is a long off-width that is climbed by leapfrogging two cams the whole way (if one ripped when moving the other you’d probably die).  This doubt led first to trying to work out a strategy for getting to the top instead of waiting to be rescued - like climbing out on another route if we could - then to ways we could make it work with what we had.  In the end, we decided that if the crack was two wide we’d saw our wooden belay seat and a half and stack it against the cam and the rock giving it those extra inches. Luckily - and to our great relief - Jordan managed to climb the pitch with the cams we had.

I’m not sure what time we reached the top, but it was dark and we were all very tired (and suffering from bicep cramps after jugging the free-hanging haul line on many pitches).

Topping out on El Cap remains as one of the most savoured moments in my life; a kind of growing excitement that soon it will be over, yet remains distant right until the last moves, and then there is nothing; only the relief of removing gear and dropping it without care on the floor.

It was dark by the time we got to the top, where we sat around for quite a while sort of disbelieving we’d just climbed the route in a day, and in such circumstances.

Eventually, we laid in our bivy bags and belay jackets and tried to turn down the buzz in our heads - which came pretty soon, all being totally and utterly knackered.  Then at midnight, we had an unexpected visitor in the shape of Alex Honnold, who crept up on is without a headtorch looking as if we’d just come from a single pitch route.

“Hi Alex what you up to?” asked Adam.
“Oh - nothing much… just done the Nose, and heading down to do the Salathe and then Lurking Fear”.  And with that, we said “well done” to the Zodiac crew and headed down.

Down in the valley again trying to rest and psych up again.  Climbing Zodiac as a 3 in 19 hours made me realize - at the time - that trying to solo it in under 24 hours was crazy and impossible, but now I’m not so sure.