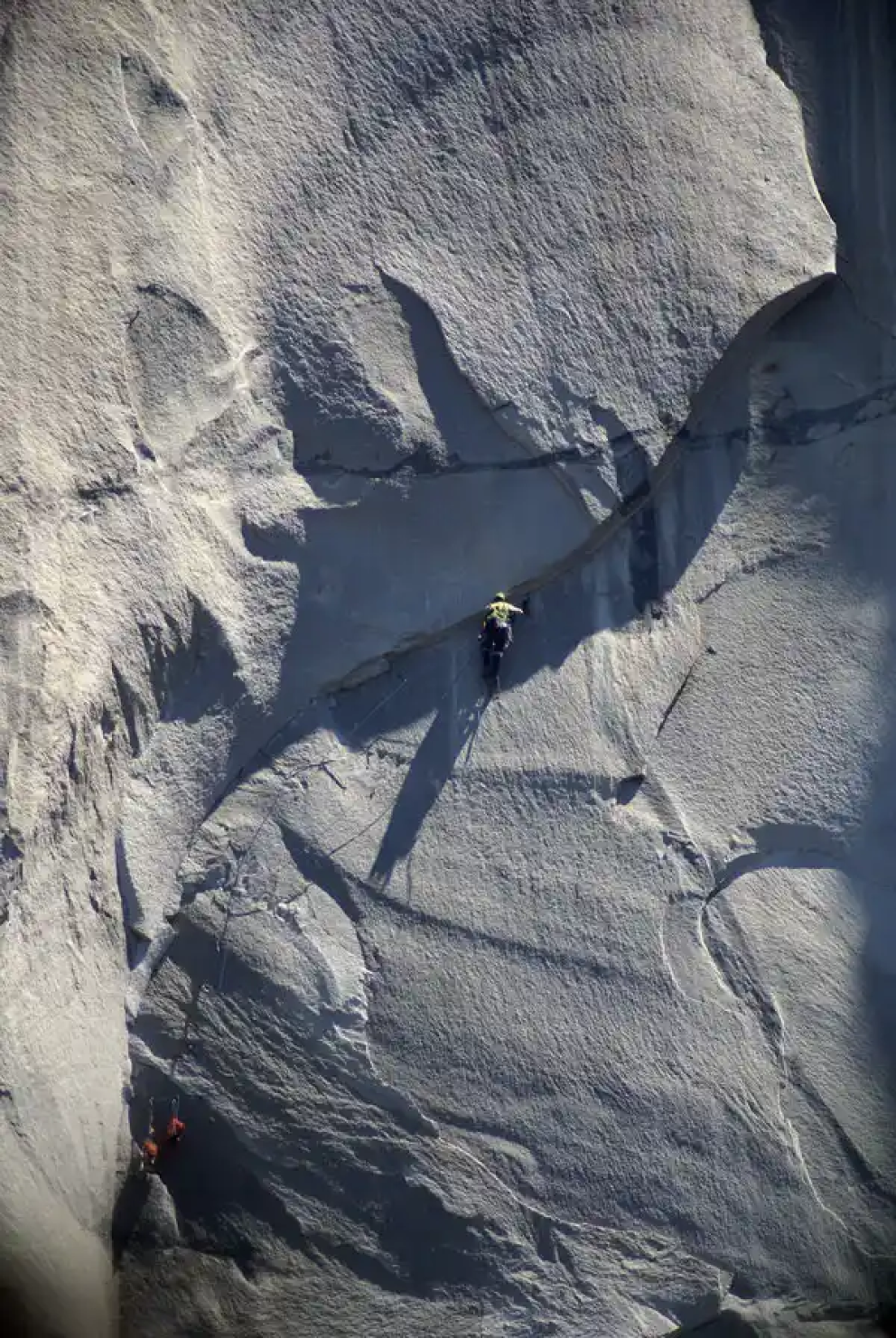 I’m sat in my usual spot in the Yosemite Lodge cafeteria typing out words with sausage fingers, my hips and feet aching with a dull throbbing pain, my head full of fog.  I feel as if I’ve been run over or been cage fighting.

On Friday at 7.30 pm I started up Zodiac for my 5th time (2nd time that week), with just 3 litres of water, a single rope, two sets of batteries for my headtorch and a minimalist rack; I don’t think I’ve ever felt so committed in my life.

The first two pitches were climbed, rappelled, and cleaned in 90 minutes, and as the valley draw dark I pressed on; climb as fast as I could, set up a belay, abseil back to my last belay, take the belay apart, grab my pack, jug up the rope cleaning gear and repeat.

When I got up that morning I felt tired, still recovering from climbing El Cap in 19 hours two days before, and compounded by a week of disturbed sleep before that, and so it was a bit of a surprise to me that I was trying to climb non stop.  This was born out around 2 am when I began to feel very tired, felt that agonizing desire to lay down and sleep.  As was pitch six and decided I should try and sleep for two hours to recharge my batteries, so sat there and fell into a half-sleep for 15 minutes then woke as the moon come up.  Sat there in the dark on a tiny ledge I began to feel scared, like a free diver who was unsure if they had enough oxygen to make it to the surface.  My mind was full of doubts, such as if I was going to slow, if I had enough water, the fact after this pitch I would find it almost impossible to get down with only one rope.

I imaged that hand on the tiller, and told myself to be calm and to get moving, as the action would dispel my fears.

I arrived at the white circle at dawn and started up the crux pitches, which aren’t too hard, but I felt as if I was slowing down.  My mind seemed to be drifting, wasting precious seconds untangling slings or watching silverfish swarm on the wall.  But again and again, I would snap too and remind myself that I couldn’t dawdle - I had to climb before my water ran out.

My first big problem came when I had to abseil back down my lead rope on several of the traversing pitches, necessitating scary back cleaning on the way up, and much jiggery-pokery on the way down.  Again and again, I found myself spinning a long way off the deck trying to get to a piece of gear so that I could pass it.  Each time I did this I felt time slipping through my fingers.

At 7.30 pm I was still four pitches from the top.  I had been climbing non-stop for 24 hours, and awake for 36.  I felt no surge of disappointment when I saw the time, as I’d known for the last 7 hours I couldn’t make it.  Now I just wanted out, and entered the terrible space of the failed speed climber, who is forced to confront the wall with little in the way of food, water or energy as night comes on - only without the dream of success to power them on.  By now my harness was doing me grievous damage, and my feet felt sore and my hands ached from jumaring, but with nowhere to even stand I had to dig deep until I could reach peanut ledge (a surfboard sized ledge for one) three pitches from the top.

I pulled onto the ledge around 10 pm and sat there for an interminable time, knowing I had to rap down and get my pack, but seemingly not being able to move.  I realized I was taking micro naps - a tiny bust of uncontrollable sleep.  I knew I was in great danger if I didn’t pay attention, but all I wanted to do was crawl up on the ledge and sleep, my mind trying to convince me to just have a sleep and recharge, then I could rap down and get my stuff - a trick that would only lead to wake more hungry and thirsty and with lower energy.  And yet still I just sat there, my legs over the edge, trying to move, but being unable to do so.

I knew my mind had space free of tiredness in which I could operate, and I visualized a citadel within it, an impregnable fortress in which my core function was safe from sleep - everything else; memory, desire and dreams were consumed by the darkness.  This skeleton crew of still firing neurons got moving and down I went, got my stuff and jugged back, flaking out on the ledge as soon as I got there, my legs in my rope bag, a bothy bag my only insulation, so tired I slept still attached my jumars to the rope.

The sleep was cold and heavy, my mind signalling every time I came close to waking that “I’m on a tiny ledge on El Cap” and “make sure you’re still attached”.

The moon came up and so did the cramps.  I knew that the top was only 3 pitches away and there lay lots of bottles of water, but it might as well have been a million miles.  I thought about my folly, and that something was deeply wrong with me: to be unsatisfied with climbing this route in a day with partners - as if that was easy - and so I was trying the impossible.  If I’d done this then what would have been next?

I topped out at lunchtime and sat under a tree and had to drink drank a big bottle of water before I could find the energy to rap and jug one final time. It seemed was cursed - never to just to sit and the shade, always something to do.

My rucksack up, I sat under the tree knowing I should get down, falling in and out of sleep, feeling dejected and foolish to have tried such a thing.  I tried to find some satisfaction that I’d soloed a wall in 30 hours that usually took a party 4 or 5 days, but it was no good, I knew I’d simply deluded myself.

The walk down was tougher than usual, as all I wanted to do was lay down and sleep, but on I went until I reached my car and just sat there feeling empty (my emotions were primarily dictated by lack of sleep than anything).  Then out of nowhere an old man appeared dressed as a scout leader.  “Did you just climb El Cap young man?” he said “I think I recognize your rucksack, I watched you this morning with my binoculars”.  “Yes, I did” I replied sheepishly.  “Well well done young man,” he said, holding out his hand “that’s a mighty impressive thing you’ve done,” he said smiling.

I sat back in my car and thought it disingenuous to feel anything but pride for oneself for climbing El Cap, a rock with no bad routes, and no bad climbs.

So I’m sat recovering in the cafeteria - my eyes heavy.  I know when I stop hurting I’ll be stronger - and the lack of pain is just a sign that you’re getting weak (wow I sound like Mark Twight).  I have enough time - and maybe enough energy - to try once again a sub-24-hour solo ascent of El Cap - probably Lurking Fear as I just can’t bring myself to go on Zodiac again.

In the food queue a few minutes ago I found myself behind two young black guys, one a minister the other a soldier on leave.  The soldier told the minister that he was going to Afghanistan in a weeks time and that he was worried about it.  The minister just looked at him and said “I’m sure it will bring you closer to God”.