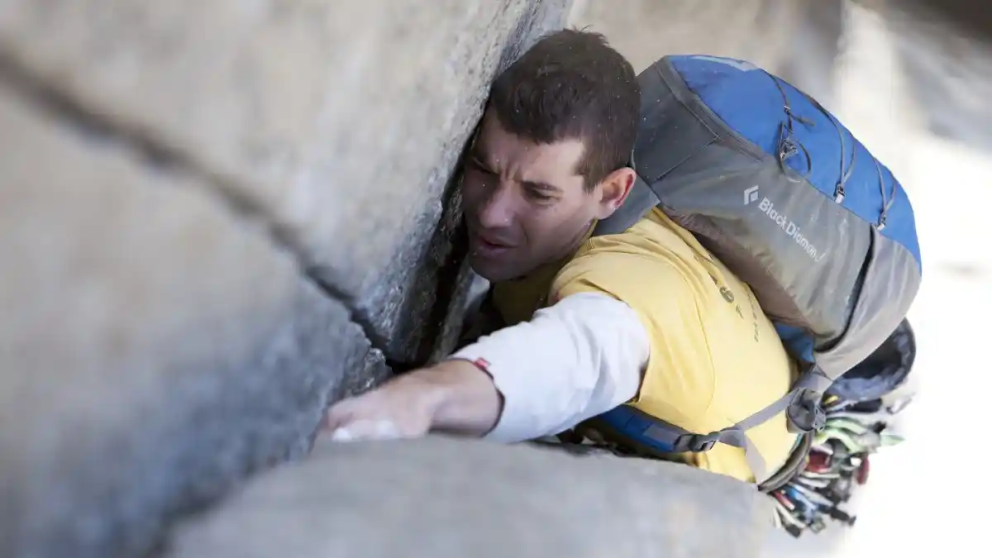 letter from America: Superman and the fuckwit

Back in the cafe after another unproductive night shift on El Cap.

Every time I try and fail - I’ll explain why later - I come down not feeling glum, but excited about going back.  Every time I fail I see things I need to do better; little tweaks, better ways of doing things, new ways of thinking.  Also every time I go back, the mountain before me is a little smaller.

Yesterday morning I was being attacked by my ringtail cat - but it seems months ago already.  Coming down at 5 am I felt knackered but happy to have plenty of time to try again, and again, and again - if need be.

Sat in the cafeteria having breakfast (which feels like lunch when you get up at 5 am) I bumped into Alex Honnold.  When I say bump, what I mean is he’s sat on the same table as me.  For those who don’t know, Alex is one of the best climbers in the world at the moment, with the term ‘best climber’ being based on more than just how hard he can pull.  Alex’s makes climbing exciting and redefines what’s possible.  His ascents and solos are best categorised as the impossible kind, or ‘I can’t believe he did it”.

When he sat down I wanted to tell him that I’d picked up his prize at the last Kendal mountain film festival for his film ‘alone on the wall’ but felt it would sound a bit sad, so kept quiet.  Then Alex said, “Do I know you?”  I guess he saw me pissing into my cup under a boulder in Winter Patagonia?

We spent an hour talking about soloing, as the previous day Alex had soloed the Nose and half dome in a day (6h for ElCap and 2 for half dome), smashing the record.  Alex is an unusual climber and seems devoid of ego.  It would be unfair to call him a savant, but you get the impression that to Alex what he does is nothing special.  Maybe it’s like people thinking Superman’s amazing because he can fly, but to Superman, it’s just what he does.

After breakfast I trawled around and had a kip in my car - my sleep patterns being pretty irregular at the moment) and waiting for the evening before walking back up again to the base of the route.

I met Leo Houlding, Jason Pickles and AL Lee in the car park getting ready to head up to finish Leo’s project ‘The Profit’ (named after the dance track - not the great French prison film).  They all looked on good form - even though Jason had lost most of his gear when he left his bag by the side of the road - and AL is filming the climb for Psyche 2.  Anyone who’s seen The Asgard project will know that Jason is both a great climber and a real star.  A few years ago Leo complained that people were more interested in watching me pissing in a cup than him sending some hard climb, and I had to point out it was just because Leo was too good and Brits prefer crap people who fail.  I think this comes across in The Asgard project, as Leo is such a star (he always reminds me of Alexander the great for some reason) anything he does like a foregone conclusion, whereas a character like Jason stands out because although he’s a very strong climber, you see him as one of us - plus he has wonky teeth (like all great British climbers).  I’m sure successful or not - the Profit with proving great material for Al’s next film (we’re hatching a plan to do El Cap in a day together as part of the film as well).

After hanging out for a while I made my way back up to Lurking fear (quite a hike), meeting two black bears on the trail (we both stood and waited to see what each other would do).  I set my alarm for 12.30 am and wrapped myself up in my bothy bag and laid on two beer mat sized squares of foam.

I always find getting to sleep at such a time pretty tough but have hit on a great strategy, basically listening to podcasts from Radio 4 (‘In our time’ ‘From our own correspondent’  and Great Lives).  It seems that no matter how awake I am, within 5 minutes I’m asleep.

As usual, I woke up before the alarm and sorted out my gear, gobbling down the last of my power food (carrots and hummus) then started up.

I’m leading on a 100 metres Beal 10mm ropes, meaning I can link two or three pitches into one, reducing belay setups, and the first two pitches went in under an hour.

At the start, I was feeling a bit rusty and suddenly thought how crazy it was that I was trying to solo El Cap in a day when I haven’t done any aid climbing for a year, and the last wall I soloed was about eight years ago!  I just thought I should keep going at a steady speed and I’d get there (Lurking fear is a warm-up for trying the much harder Zodiac next week).

I reached the belay and quickly set it up to rap down and jug back up, but in my haste, I unclipped the wrong krab and watched my Silent Partner (my solo belay device) fall from my harness into the darkness - followed by a loud metallic crash.

Anyone who knows me will know that I have a life that’s is full of fuck ups, and so I’m a master of taking it on the chin.

How could I get angry?  It was dark; I was tired, I was rushing.  Instead, I thanked my stars that it was only on this pitch, and that I could still reach the ground with my ropes - and that now it had happened it wouldn’t happen again.

Instead of defeating me, it would make me better.

This didn’t alter the fact that I was a clumsy fuckwit.

Down I went once more to my simple bed amongst the stones, to wait for another dawn, another day and another chance.

It was also my birthday.