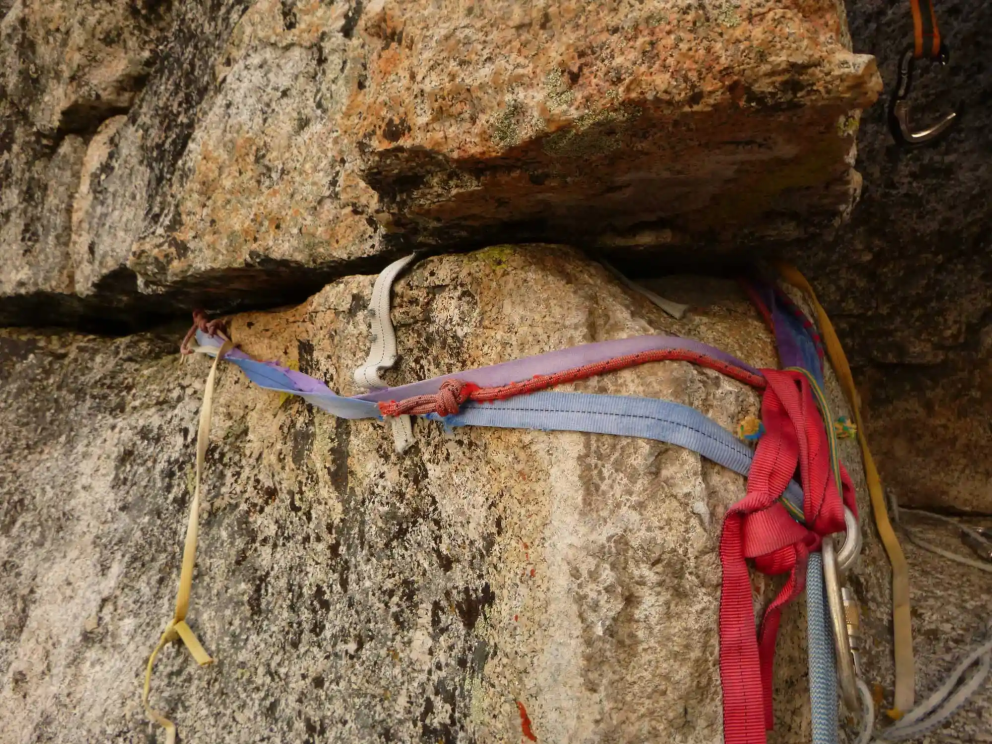 “I’m going to leave a nut,” I said, crouched down, tugging at the rotten rap slings jammed beneath a couch sized boulder, “I don’t trust these slings”. “What! We’ve already lost two nuts already,” said Vanessa, “I’m sure it’ll be grand, those Italians rapped off it earlier”. I looked again at the anchor, faded, chewed up by ropes and rodents, short loops tied around long loops, the usual dangerous jazz of a bad rap anchor, illogical, the same old mania that climbers do when they just want off. I ran my fingers around the slings, felt the wear and the damage. Was I a wimp?  I looked down sixty metres to the ground, the ropes only just touching the snow patch at the base, imagined that awful free fall if the anchor pulled, imagined those last thoughts.

It had been a long day on Lucky Streaks, a classic Tuolumne 5.10c on Fairview Dome, and our feet were in bits, weakening our resolve for the last ‘easy’ 5.8 pitch and so instigating a descent down the route.  So far we’d only left gear we’d found on other routes, two nuts and two krabs, the traversing nature of the route necessitating placing gear by the first one down in order to hit each belay. Although retreating, it also seemed a good lesson in getting off traversing routes, how to set up safe rack anchors, how to handle ropes on such ground, so they don’t get stuck.  And now we were at the last belay, the end in sight. “It’ll be grand” repeated Vanessa, just wanting the ground.

Although as a climber I don’t seem to have progressed much regarding technical difficulty since the age of sixteen, one thing I’ve become an expert on is abseil anchors. I’ve seen them all, from loverly safe bolted anchors an elephant could go off to ice threads, dodgy spikes, retrievable ice screws, a tied-off knifeblade in one inch, snow bollards. I’ve also become well aquatinted with fixed stuff that breaks, slings and cord, knowing it just goes ‘BANG!’, No creaking, no warning. The worst is a tape, which can look in good condition but one bad little patch, plus serious sun damage, and it just rips apart like paper. Cord is better, the sheath soaking up the rays, but even then, a 7mm strand of cordelette abandoned on a flake several years before you got there is a dice rolling anchor.  What about when you put all the junk together, as we had here, several strands of crap, all threaded through two rap rings? Well yes, there is strength in numbers, and I’ll never forget the rap anchor on the American Direct on the Dru, some spike that must have thirty loops of tape and cord around it. Thinking logically if each piece was only able to hold 20kg then together they would be OK. And then there was the three Italians who had rapped off while we’d been there. But they were Italians, who like most continentals have a crazy trust in the fixed junk. I’ve seen French climbers belay off a single old fixed peg, no testing, just clip and hang, bringing up two partners, all done with bomber cracks all around. Maybe I am a wimp, maybe this attitude is why Brits are so slow, but maybe this is why Brits - unused to fixed anchors on mountain crags - don’t die when belays rip out on alpine climbs.

One of the most revealing stories along these lines was Roger Mear’s descent from some route in the Ecrins. Following two Spanish climbers down a steep wall, he arrived at a rap anchor comprising of one lost arrow, both Spaniards hanging from it. Roger, being tough enough not to care what others thought of him, thought the anchor dicey, and so slipped in a nut and quickdraw, clipping this into the pegs krab.  The second the gate shut ‘BANG!’ The peg pulled, both Spanish climbers falling onto Roger’s wire.

I looked at the slings again, measuring up what I knew about slings and cords, breaking strains, the cost of leaving a nut, cursing myself for not having any cord to just add my own piece to the junk show.  I looked up at Vanessa - my wife - and thought about her mum, crying as we left Galway, me telling her I’d keep her daughter safe.  “I’m placing a nut as a back up”, I said, sticking in a Wild Country Superlight 10 under the boulder and using my prusik loop to tie it into the rap rings.  Then I set up an anchor with two cams, to act as a back up to the anchor, which Vanessa would take out once I’d gone down (I weight 100kg while Vanessa weighed 60kg).

Set up I threaded the ropes. “I’ll bring down that nut with me,” said Vanessa, half-joking. I gave her a serious look; they told her the story of two climbers who’d been descending the Midi. One had put a new Dyneema sling onto a spike full of crappy slings, to the protest of his partner, who said everyone used these slings, but he would not be dissuaded, even if he seemed a wimp.  Safe on the sling the climber rapped to the bottom of the route and shouted ‘off’. A minute later his friend began down, then without warning his partner was free-falling, crashing down the wall in the mess of rope until he struck the base, dead. Around his neck was the Dyneema sling.

Ten minutes later we were both on the ground, safe and sound. “I’m sure that anchor was grand” repeated Vanessa, but therein lies the rub of such paranoia, the cost of which when you’re wrong is death, the cost of not finding out around £9.