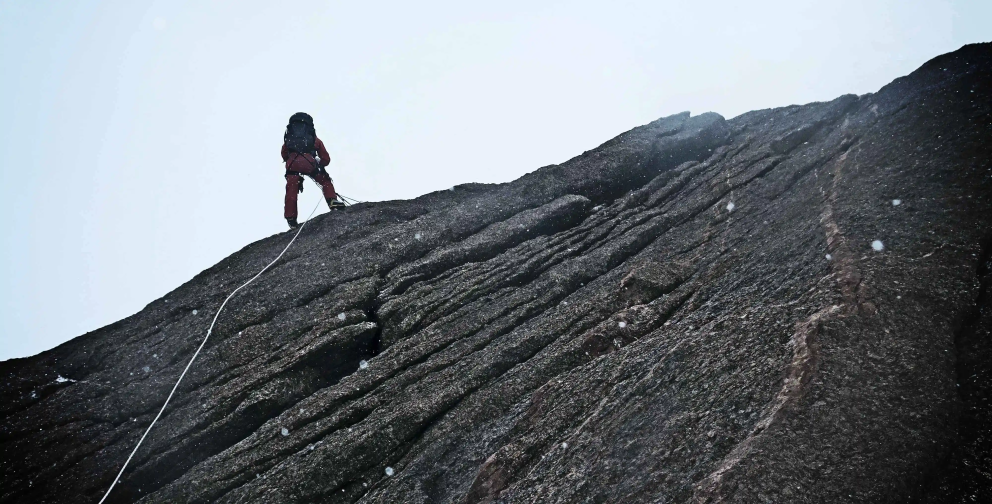 Moving together as a four

A quick question about moving together in alpine environment. Heading out to the langtang Himalaya to attempt naya kanga with three others.

Most guides seem to fix a rope for their clients to jumar up and down on the long, but easy (Scottish I/II ridge) We will be self-guided, myself being the most experienced in the group with several Scottish winter and alpine summer seasons.

I was planning to move together (alpine style) for much of the ridge, but have only done this as a pair previously using coils to shorten the rope and placing gear/short pitching where necessary. How does this work for 4 people on a rope. See plenty of groups moving like this in the alps seems like an efficient way to minimise gear and weight.

I have read that tiblocs/ropeman should be used on the gear placements to protect the leader in the event of a second falling, but is this really practical? Surely carrying a rack of these fiddly little buggers is over the top?

In the past whilst moving as a three on easy Scottish gulleys, I have instructed the middle climber to unclip runners and re-clip them for the final to remove, this seems to work though is clearly not ‘bomb proof’.

Any advice would be greatly received.

The hardcore answer would be that really on ground where you cannot fall, and where there will be no crevasses, the risk of one person falling and pulling off everyone else, means just soloing together would be better.  Often on ground where you know you won’t fall into a slot, just soloing alone and not having ropes pulling, snagging and generally being a pain in the ass works best.  What if the people you’re with aren’t good enough to solo, or perhaps you don’t trust them enough to have them unroped on the mountain?  Well then you defiantly should not be tying on with them either!

I don’t know what kind of ridge you’re talking about, but four experienced climbers on a sixty metre rope, who know each other well, and trust each other may be OK, with gear being placed and switched over as each member passes - but again often the only real protection is that no one falls.  Once anyone trips, slips or peels (worse still the last person) then you’re fate is in the hands of the Gods!

The auto belay/ascender technique (moving together with a belay that locks of the lower climbers falls, but acts as a runner if the leader falls) when applied to two people on a long rope (or three) works very well.  You can move together with no pro on easy ground (zig zagging through features etc), then throw in a micro ascender when things get a bit trickier.  I’ve used this system on ground that was at my technical limit and think it works well.  But again you need total convince in your team mates, so you’d want to practice this on some multi pitch routes first (either mountain routes or big scrambles).

I hope that helps - and have a great trip.