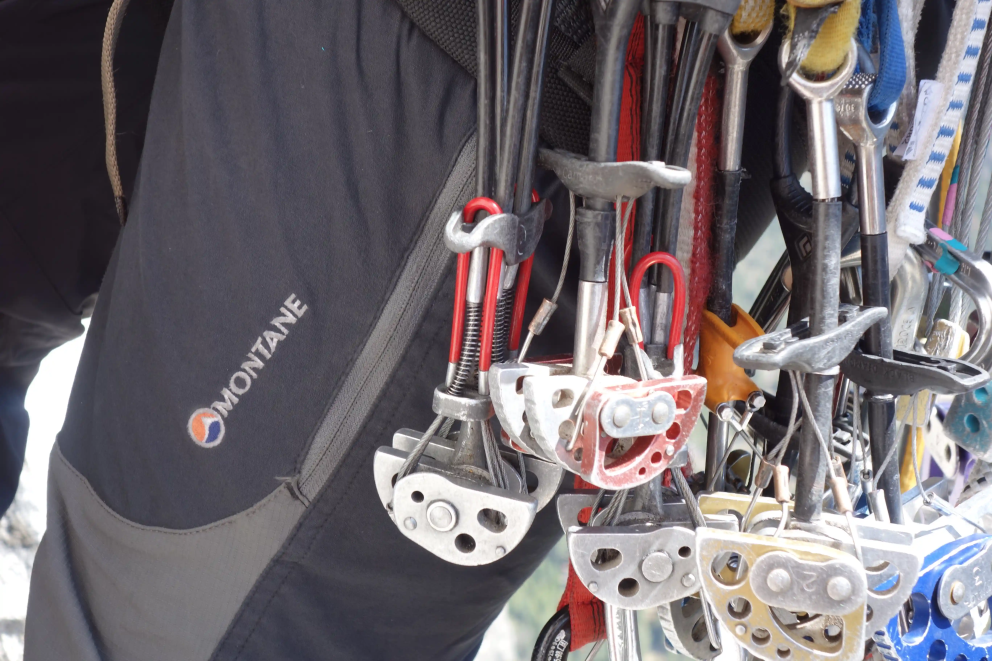 One cam to rule them all

For some reason, I feel as if the Totem Cam has been around for quite a while, popping up now and again at trade shows and in conversations, a funky cam with an odd and overly complex clip-in loop.  “It’s great in flares” and “you can load just one cam,” people said, but to me, I put it into the ‘reinvented wheel’ category of hardware - some tweak of something that didn’t need tweaking, after all, Friends, Camalots and Aliens had given climbers all they needed.  For me the Totem cam sounded like another of those strange units, you find gathering dust in the corner of some euro climbing shop, unwanted and unneeded, hidden away along with odd belay devices that never took off, soft alloy pegs and anything made by Stubai.

How wrong I was.

A box arrived in the post from Spain last year, and on opening, I found to my surprise that it contained five Totem cams, ranging from finger to thin hand size - 13.8mm (smallest size contacted) to 52.2mm (largest size open).  My first impression was that these were not mickey mouse, but that they fitted into the same category of cams as Aliens, namely a specialist design engineered and built by people who understood cams.  Since then I’ve used them on El Cap, the Eiger and Stanage, both in bread and butter cracks, as well as placements so marginal nothing should stick (but they did).  And now my impression has gone 180 degrees.  Totem cams are the most technically able cams yet made.

Most standard BD, Metolius or Wild Country cams will work in 95% of free climbing placements, but then there are places (flares and shallow cracks) where they are marginal at best.  Throw in super marginal climbing (aid, limestone, winter), and their usefulness drops off further.  The introduction of the Alien by CCC over a decade ago revolutionised both big wall and free protection, as these narrow cams just stuck anywhere, making the old school cams redundant overnight for technical cam work.

Amazingly enough, over a decade later no one has beaten the CCC Alien in regards to its ability to stay put, the problem which I think is down to everyone using a harder alloy and lacking the same level of flexibility (Metolius came close with the Master Cam).  Although people told me that softer alloy on the Alien (6061-T6) made no difference and that these cams would wear out faster because of it, in the field (well on the wall) it certainly seemed to be crucial - giving the cam that initial ‘bite’ it needed, and flexibility that meant the force was transferred onto the lobes to maximum advantage.

I guess I’d given up thinking the Alien would ever be beaten, which was a shame as supply always outstripped supply.

It’s no surprise then that the Totem is now manufacturing their version of the Alien (Basic Cam) and the Totem Cam itself, which amazingly outperforms the Alien in many placements while using a harder 7075-T6 alloy.

The reason these cams can still perform, even with a harder alloy, is their fully flexible stem system that focuses on applying force directly to the cam units independently, as well as eliminating leverage (a problem with ‘semi’ rigid units).  This means that the force is transferred either equally direct to the lobes, as well as giving the user the ability to single out just one side or both (using the sling).

The Totem cam has been in development since 2001 and looking at the images below it’s easy to see how the design developed.

Where the units work best is in that 5% range where a standard cam is marginal, and the other 5% where it won’t work at all.  Peg scars, flares (tech data here) and pods, with the units having super narrow heads (haven’t measured every cam on the market but I think they have the narrowest heads of any unit), vital when it comes to plugging them into finger pockets or working in mega shallow cracks.

Added to this they are light, and advertise a wider cam range than any other single axle unit (same as a Camelot) - but personally, I didn’t notice that too much.  What I do know is that once I had them on my rack (mixed with Camalots and Aliens), they became to ‘go to’ cam most of the time, especially when it cam to anything flaring or super shallow.  Another thing I like about them is that they seem very robust, a problem that is an issue with the old CCC Aliens, which soon got hammered.

The drawbacks of the cams are that although very lightweight they are bulky, and hang with their widest area facing you, meaning they can take up a lot of room.  They also don’t go super small, or super big, so other units are needed (small Aliens and larger Camalots).  These cams are also more expensive than mass-produced cams, but we’re talking a super-specialist design, and engineering, so think of it less as a Ford Fiesta cam, and more Pagani Zonda, and every time you get one to stick in an impossible placement you’ll know it was worth the extra cost.

So who needs these units?  Well first of it’s a no brainer that they are highly recommended for big wall climbing, and there is nothing on the market that comes close to having their ability to hang on to the rock.  Beyond that, any climber who climbs on rock that can be hard to protect (limited placement options) will find these a boon, because if these don’t work, nothing else will.  If you already have a large cam rack then perhaps having two sizes of Totem (yellow and Green) to expand your cams would work well.