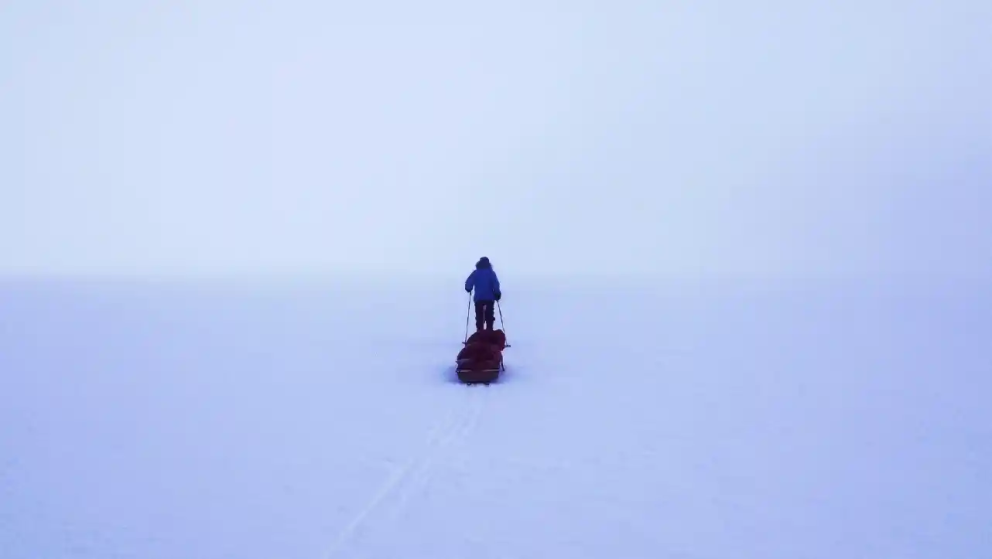 A few weeks ago a friend of mine failed to ski to the South Pole.  His aim was to set a new record, but he didn’t even make it beyond the Canadian coast due to poor weather.  It was a costly failure when you consider that a trip up north can set you back by ninety grand; not to mention a year’s training and preparation; his very own Olympic event. To make matters worse, this was his third attempt, the first failure due to a broken ski binding, the second a broken fuel container.  If no one had known about his plans, it would have been easy just to slink off, but with a well-designed blog, twittering and Vimeo videos going up every day, it wasn’t going to be that easy.

People often criticise people for sharing their adventures, that it’s all self-promotion; but having dabbled with it, on a creative level there is nothing like it for raw communication, and is as unique and valuable as war reporting from the front line.

And yet even in this age of instant media, where you share everything; once you fail, failure is all your own.

Keeping an eye on his blog, living vicariously, checking it every morning I began to sense bad news on the way, a familiar ‘dream creep’ that happens so often when you try things that you know are beyond you.  Like everyone else watching I hoped for the best, that he would at least have a fighting chance, and we could share in the fight, but it wasn’t to be.

Watching this non-event unfold reminded me of an old climbing partner, who always said that you should never tell anyone one about your big climb, as then it was easy to fail; without people knowing you were a failure, and that telling people jinxed it.  In climbing - just like polar expeditions - many things can change, and nothing is certain: weather, fitness or conditions widening the gap, you and your ambition on one side, reality and success on the other.  Ueli Steck also uses this approach on all his hard solos, keeping them a secret until they’ve climbed, only then telling the media and returning to re-climb the route; knowing that the pressure to perform can be terminal, especially when media types are involved.  The bottom line is when it’s your neck on the line, you don’t want anything to cloud your judgment, and TV people tend only to focus on their investment, not yours.

This winter I tried a dream climb, another solo, only one with no speed records in site, and no multi media angle.  I kept it a secret from just about everyone, only telling the few people I met along the way that it was on the Grande Jorasses, but being vague about which route.  It was a super cold January, and the first crux was just getting all my gear to the bottom of the face, skiing up the Mer de Glace with a pulk; making it feel like an expedition from the start.  I slept out on the glacier the first night,  the night as cold as any I’ve had in the Alps, even inside two sleeping bags.  Laid there, with just my nose sticking out, I had time to consider what I was about to attempt, the reality much sharper than when laid in bed at home.

The following day, skiing up the Leschaux, dressed in all my clothes, I looked up at the Jorasses and just thought ‘Nah - I don’t think so’, turned around and came home.  I had no one to judge me but myself.

When my polar friend threw in the towel people were very supportive, his blog comments full sentiments of ‘better next time’ and ‘it’ll still be there next year’, as well as the odd appropriate quote such as: “Courage doesn’t always roar. Sometimes courage is the quiet voice at the end of the day saying, ‘I will try again tomorrow.’” Such support is one of the best things about sharing your successes and failures.

And yet, having had my miserable failures in the past, I thought that maybe he would be in need of something other than support and understanding, so sent him the following email:

“Do you ever feel like telling all those people who are so bloody positive when you dream don’t turn out as planned just to f**k off (I do).

Instead, I prefer to flagellate myself with the few emails or comments that point out my weakness (real or imagined) and how crap and overreaching I am; finding this is much more healthy in the long run.

A bit like reviews of my book on Amazon - I only read the one-star reviews, as I just think the people who give five stars just don’t know what they’re talking about.