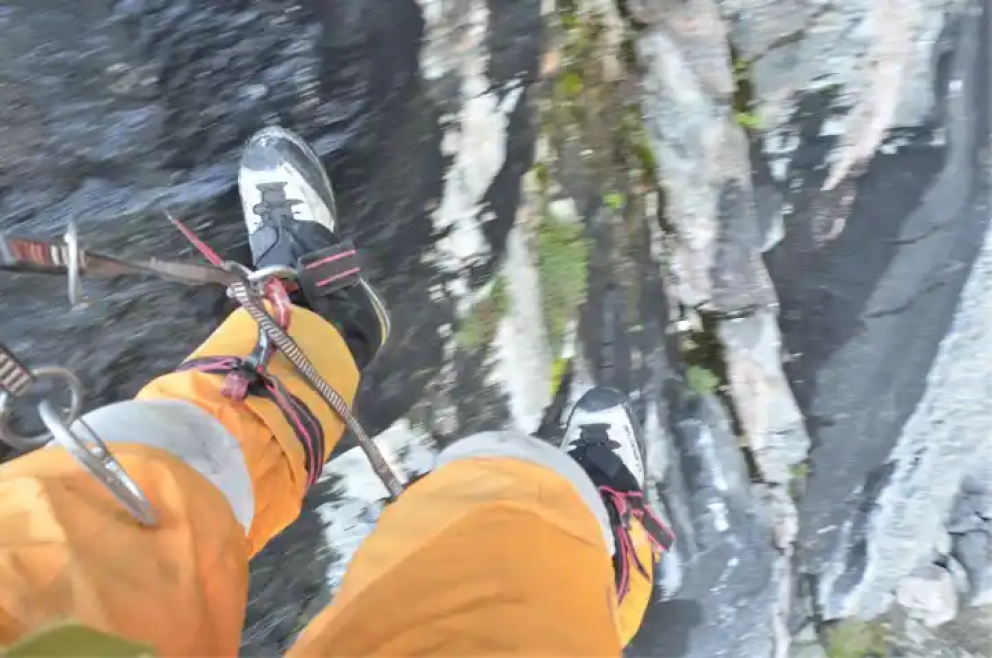 The weather looked like it was taking a turn for the worst, and with my haul bags yet to make it to pitch 5 (1st wall bivy), and hauling looking like a big job due to the nature of the terrain (solo hauling can be a bitch), I’ve headed down till Wednesday.

And so I’m sat in a little camping cabin, with a bunk bed, kettle and a table (even has a table cloth) - and it feels like paradise.  Funny that I was only camped out at the base of the wall for 3 nights because it felt like a couple of weeks.  I guess the Troll is a strange place, where the time and intensity of most things is greatly magnified.

The best way to describe it (I’m sure other Troll climbers would back me up) is it’s a little bit like going into a war zone, where the is the suggestion that at any moment something bad could happen, but like a good soldier, you make believe it won’t happen to you.  Sleeping, climbing, just being there, you’re always somewhat on edge, every little noise making you pull your head in.  There is always that danger of being hit by a bullet, a little stone tumbling down from the summit Trolls (I’ve been to the top - there are a lot of stones and clumsy Trolls), not to mention the BIG ONE - the nuclear option - a hundred-metre pillar or flake that would probably get me with the blast alone.  But as I said, I’m a good soldier, and keep my helmet on tight, and stay behind solid cover as much as possible.

Walking out today I began to think that Suser gjennom Harryland (VI A3 5.10b, 600 metres, 18 pitches, Halvor Hagen-Kyrre Ostbo, 1996) - the route I’m soloing - would make a perfect testing ground for big wall climbers before heading to do walls in the greater ranges.  The route involves a difficult journey to get there (you have to get to Norway with all your kit, and it would have been quicker for me to get to Patagonia or Alaska).  Once here you have a mini-epic of an approach, with different routes that have pros and cons.  Once you leave the trail (most of which has now been destroyed by snow avalanches and rock avalanches), you’re in harms way below the walls and have a whole gamut of dangers (horrible screes slopes, and a steep approach under a heavy load - where you don’t want to dawdle.  Then there is the wall looming above you all the while, praying on every little fear.

Basically, the Troll Wall is the Eiger for big wall climbers, although set upside down (the Eiger is a slab), and much looser!

Then at the wall, you have to deal with a whole range of problems you would not have encountered learning your craft on El Cap (bad weather, make your own big wall belays, loose climbing, reducing the risk factors to yourself and your team).  Do it in winter, and you’d be set for life (so much for me not wanting to recommend the route to my worst enemy!).

Of course, coming down I was questioning my motives; was I really coming down because it was a good idea, or was I wimping out and running away, and once down in the valley fear would overwhelm me, and I’d go home with all my kit still up there!

I had one of those ‘what would steve House’ say moments, were you imagining someone better than you being faced with the same choice, sat at the bottom, wondering if to stay and sit it out; take a chance on the wall, or take a chance on me, and believe I’m doing the right thing (am I to be trusted either way?).

Actually, this week, whenever I need to take a bearing on my heart, I think ‘what would Bonatti do?’

I’m a little tired, and so coming down has been a good chance to rest battered hands, sore knees and aching back, as well as get all those bits I forget in the first place (watch, glasses cord, more pegs).  I also dug out my mini parachute for throwing off my bag from pitch 10.  Right now it feels like a good option.

Also got to talk to the kids (in a way I didn’t want to, as I knew they would undermine my resolve, but I did, and it didn’t).

Had quite a few emails from people asking stuff about the kit I’m using, and how I’m blogging, so will write that up tomorrow.