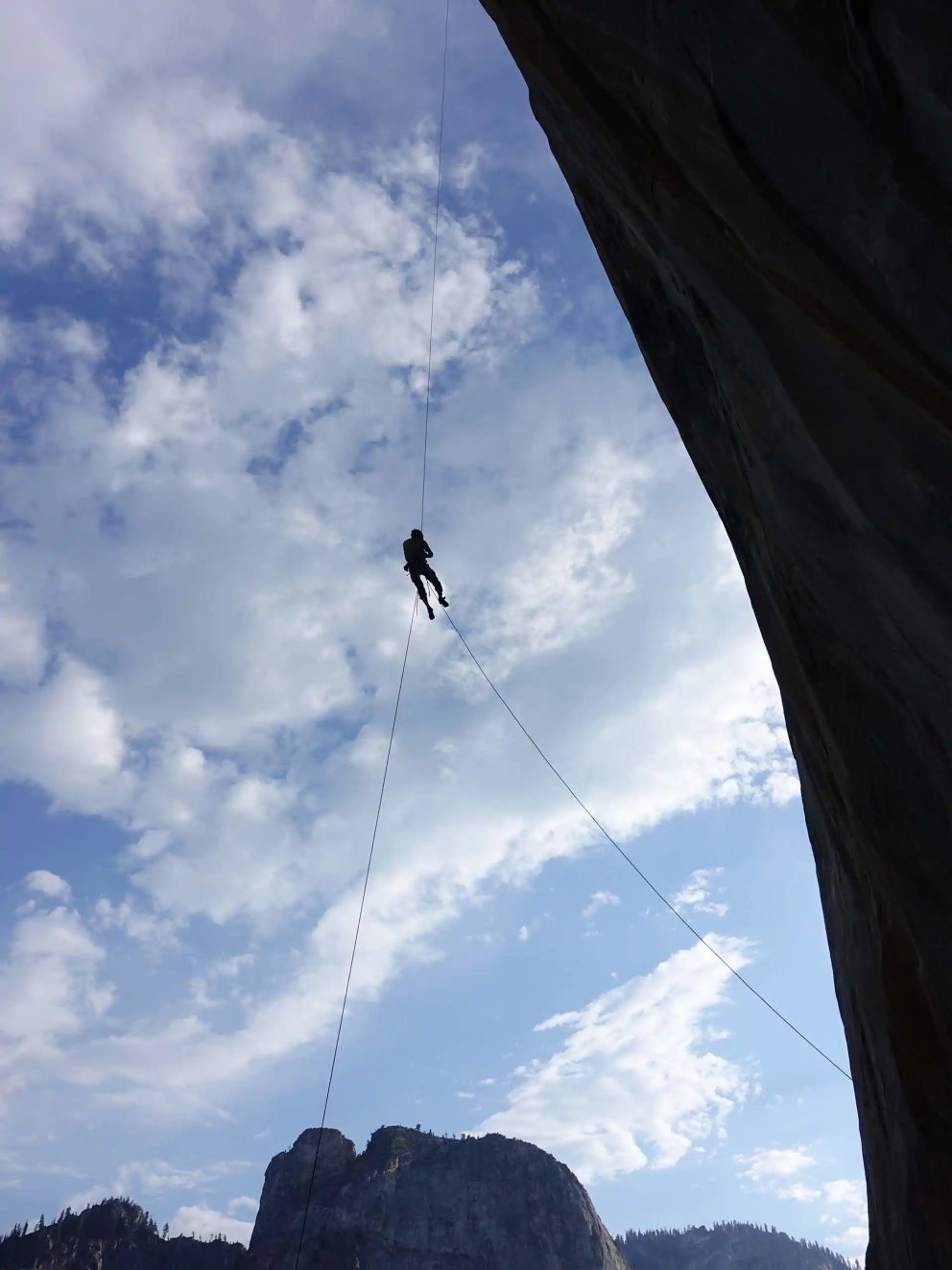 I’m trying to get into Aid climbing, but I’m kinda stubborn and like to “do it myself” youtube have helped me a lot with my climbing and also reading your blog and so on.

So to my question: when you aid climb you use a dynamic lead rope. When the leader gets to the top of the pitch he fixes the lead line (figure eight on a bite?) to the anchor, and start hauling.

The second (if your have one) will then take out his jumars and start to ascend the rope, and heres my point, the dynamic rope will potentially rub agains the rock and so forth and be sewed ? is the leader suppose to leave rope protection? This is a huge problem for me to evolve my climbing. I trust my protection 100% but I feel the rope will snap as soon as it touches the rock face.

Thank you again for your awesome writhing and standup!

Every climber knows about John Harlin’s rope breaking as he jumared up it on the Eiger direct, the image of him falling and falling stuck in your head as you jug!  I guess it’s for this reason that the worst climbers to climb with tend to be those trained in rope access, where you never trust a single rope, always being one on stonking static with the second ride beside just in case.  For such people the idea of jumaring on a stretchy and springy single - yes SINGLE!!! - dynamic rope is tantamount to suicide, that cord-cutting through the second it touches anything.  You’d probably find the same opinion with cavers, another bunch who jug ropes, the standard practice to employ ‘re-belays’ so that the rope (static) never touches any rock at all.

Now in the alpine and big wall world you tend to not have such luxuries (be nice if we did, but we don’t), the reason being we have a limited amount of kit (we only have thin stretchy ropes), need to be fast (no time for setting up loads of re-belays), but most of all we know we have the skill to make it work.

I’ve jugged on 7.5mm ropes so springy you’ve jugged halfway up the rope before you’ve left the ground and had ropes fixed in the most hazardous terrain you can imagine, over razor blade fins of Antarctic granite.

Why I’m still here, and why non of my mates have died from cut ropes, is that we learnt how to jumar, which is the efficient climbing of the rope.  Yes efficient, not banging up and down the rope like a yoyo, but slow and steady.  This way once you’ve taken in the slack of the rope, the rope should not move that much anymore, not saw away over edges.  Yes after 1000 metres you may have some rough spots, but you will on the knees of your pants - it’s wear and tear.

The ability to jumar correctly comes down to being highly efficient, using the absolute minimum amount of energy o needed to move your body up the rope.  This is done by having your jumars set up correctly and knowing how best to switch from foot to body, how to set up slabs, walls and free-hanging jugs.  Very often many small movements, an inch or two, is better than crazy one metre lurches up the rope.  Another factor is keeping it light, and NEVER carry anything if you can manage it, as any weight will slow you down and make you more jerky.  If you have to wear a pack then only do so on a slab, use a Croll (or attack your handled jug to a chest sling), or just haul it.

As for rope diameter, well I’d jug on a skinny rope the same as a thick rope, as either will cut through or get very damage (the sheath will break first, giving you a ‘heads up’ as you slide down the core) if you don’t treat it with respect, but on most aid routes you’ll be on a good single (10mm+) so you’re set (saying that Russian climbers tent to attach a static inline with their lead line and jug on that to clean, but then you can’t haul until the ropes been climbed).

Rope protectors are only of use for fixed ropes and can be a bit hassle if you’re going up and down them, and often end up out of position anyway.  Remember though that weight at the very end of a rope will have a much bigger bounce than a weight one metre from the top. This means if the rope is going over a sharp edge at the belay there will be very little rubbing compared to the same edge twenty metres down.

When you’re jugging also don’t forget that most times the rope is running through multiple anchors (the leader’s pro), which means the stretch is taken out of the rope, each piece taking a percentage of the strain.  This means even on very sharp terrain the leader will have reduced the chances of rope damage to a minimum (if all their gear rips as you jumar then that’s another matter!).

Perhaps the most important thing to remember though is that the rope ‘could’ snap if you don’t respect it, so even though you should have the skills to avoid it, never fully dismiss that image of Harlin falling.

Oh - and the best knot to tie off a rope that’s going to be weighted by jumars is the Alpine Butterly!