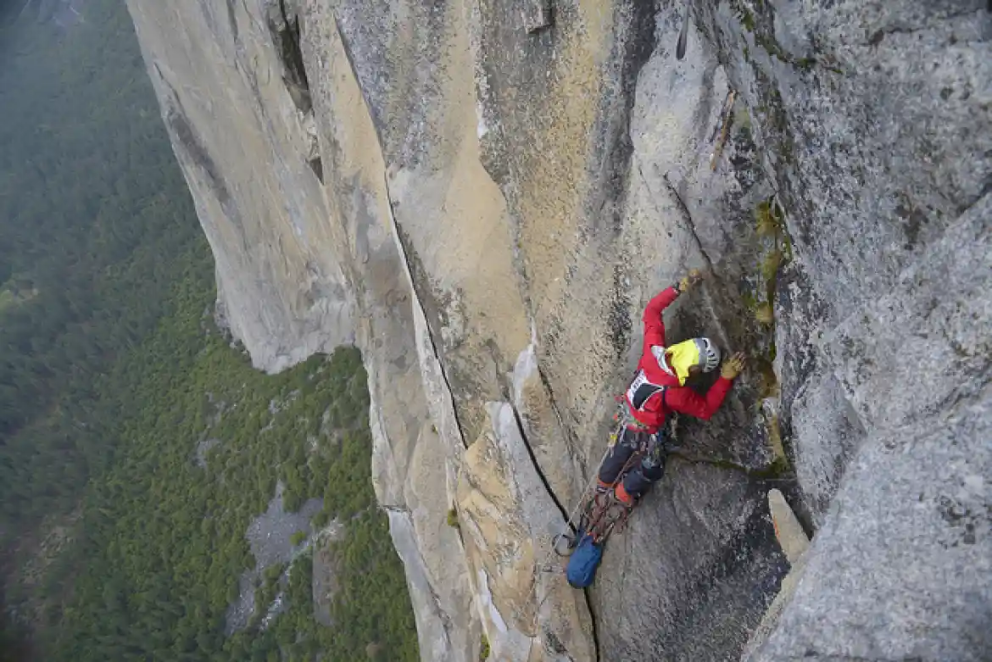 WARNING: This blog is not meant as instructional text, and is simply a description of how I rope solo. Rope soloing is highly dangerous and demands a great deal of experience and good judgment and in many ways is more dangerous than free soloing, due to an increased reliance on â€˜systemsâ€™. Anyone wishing to rope solo should already have an extensive knowledge of all the systems and equipment needed, as well as a sound knowledge of themselves, their limits, and the reality of making a mistake. â€¨â€¨Bottom line: Donâ€™t rope solo.

In this final instalment of this series of articles on rope soloing I’m going to cover the best system yet developed; the continuous loop, allowing you to tag your rack, reduce clutter and feel less weighed down by the whole business of roped soloing.

The basic of the continuous loop

With this system instead of clipping your haul line to the back of your harness, as well as the lead line (which in effect means you’re trailing 3 ropes - haul line, 2x strands of lead line), you have one up rope from the belay and one down rope back to the belay, with the down rope generally ‘docked’ in some way, meaning you only have the weight of the up rope on your harness (which can also be elevated by tying of the lead rope direct to pieces or hung from prusiks).  This system reduces tangles and cluster fucks, and allows the rack to be tagged direct to the rope, meaning a further reduction to the burden on the soloist - as well as giving them access to extra gear - vital on a hard wall.

The set up - without tagging

The ideal set up for rope soloing with a continuous loop would be a large rope bag (rucksack) and a single 100-metre rope.  One end would be tied to the belay (up rope end), while the other would be tied to the haul bags and then backed up to the belay (down rope end).  Starting at the down rope end you would stack the rope into the rope bag until only the up end is free.  You will clip into this with your soloing device or knot, take a few metres of extra rope and tie a backup, then begin soloing.  As you climb the rope feeds out (once it passes through your device it becomes the ‘up’ rope) until you reach the belay, where you tie off the rope (either in the middle point or wherever), and rap down the ‘down rope’ to the belay and complete the normal solo system (hauling and cleaning).

Most climbers will be using two ropes in this system, probably a dynamic lead rope and a static haul line, and so these need to be joined.  With two ropes you’re best to use two rope bags, with the knot (double fishermen’s) sitting between the two bags so it won’t snag.  On steep routes, you don’t need to protect the knot, but on slabby routes, it’s probably worth it, and some climbers put a plastic plate on the knot to keep it out of cracks - but personally, I wouldn’t bother.

Using a dynamic rope for your haul line adds an extra level of security, because of the lead line was to get cut you would still be attached via your down rope (via a back-up knot, and your device if you were using a Silent Partner).
Again with all rope soloing be fastidious when it comes to feeding ropes into rope bags, and also make sure you don’t twist your up and down rope while leading.

Using this system as it is is a great improvement on the standard rope soloing technique.

There are many variations on how to create a tag-able rack using the continuous loop system, but here is the basic set up.
Take a small haul bag big enough to hold both a rope bag containing your haul line and your spare rack.  This is your tag bag.  Set up the bag so it hangs from a fifi hook.

The bag is generally connected to the rope close to the halfway point (where both ropes are joined) by two points; the fifi hook and direct to the rope as a backup.  I tend to connect the fifi hook (via the extraction hole in the top of the hook) via a prussic loop, so I can both adjust the connection point, and also to reduce bulk (no big knot in the rope).  The bag is connected a second time as a back up below the prussic, either with a knot or via a second prussic (again allowing adjustment), making sure the distance is long enough so that the tag bag will be lifted off the belay when you pull on the down rope while leading.  If you think you may need to rack quite often - say you want to climb light - then you can attach it directly to the lead line at any point.

With this set up you would use the tag bag to stack your lead rope (hanging the tag bag from its fifi) and the haul line in a static rope bag attached to the belay as normal.  When setting this up it’s vital that belay clutter is kept to a minimum, and that the haul line leads directly to the tag bag, and the lead line reads from the tag bag to you, so that the tag bag can be hauled up as you climb (so no slings crossing tag bag)

Say you’re twenty metres up and decide you need more pegs, you would begin pulling up your down rope until you were pulling on the tag bag’s fifi, at which point it would lift off the belay.  You would now haul up the bag and hang it from your previous piece (or the one you’re on if it’s bomber) and get the gear you needed.  You would now re-stack the lead rope in the bag so that the section of the down rope nearest the up rope (the point at which your back up knot is tied) comes out of the rope bag first.  In effect, you’ve lifted your lead rope bag, which has the added benefit of reducing the load on your harness.
You can carry this operation out as much as you want when leading, with the amount of rope you need to re-stack each time reducing as you climb.

The dangers of this system are that on traversing pitches you may suddenly find the lead line start to feed out of the rope bag, which if its heavy enough, can pull off the fifi hook, causing your tag bag to fall to the end of your lead line, not good if you’re on a tiny copperhead.

There are two ways to avoid this happening. The simplest is to use a directional fifi like the Petzl fifi, which is designed so that the extraction loop when pulled down will lock the hook on, but when pulled up, will lift the hook off.  The second is to use a slippery knot in your lead line, which will untie as you climb but will lock if the tag bag falls off the belay.  Here’s a great little video explaining how it works:

Some people have their tag bag and rope bag separate,  but I prefer it to be one streamlined unit, so as to avoid tangles, but doing this you need to make sure everything’s tidy inside the bag (no loose nuts to tangle with the rope).

I’ve found the continuous loop method, and tagging, invaluable for solo climbing, as it takes a lot of the hard work out of it, as you don’t need to carry a huge rack.  The only time I’d probably not use the tagging element is if I was trying to climb pitches faster, and just wanted to carry all the rack (on Zodiac for example, which needs a small rack).  In this situation, I’d use the loop method but without the tag bag.

If anyone has any questions then please get in touch.