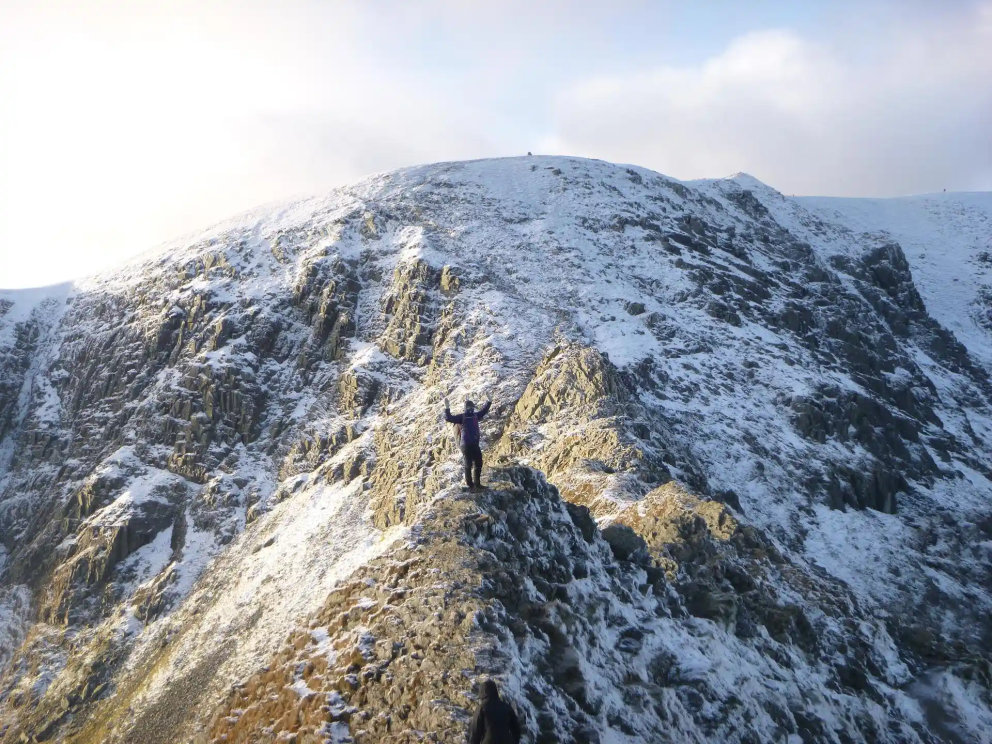 I do winter walking routes on my own in Scotland, and a few times I’ve been taking a direct route or detoured somewhere and been faced with a step – say 10 to 12 feet, nearly vertical, snowy and icy, some frozen turf, some bare rock. I’ve climbed stuff with one axe, and now carry a second one and wear a helmet, but it’s always scary. Particularly if a slip will send me onto my back or head onto rocks or there is a slope beneath I might slide to oblivion on. I’ve not run into one I’ve needed to go down yet – that would be worse.

Is there anything I can do to give myself a bit of security? I’ve got some trad gear, and a 30m confidence rope, and other bits, but I don’t want to carry it all or lose gear I can’t retrieve from the top. I’ve thought about a basic waist sling/rope harness clipped to a long sling with a big hex that I can somehow retrieve from the top, but that opens the door to some major shock loading on a static system if I fell. I’d like to be able to push it a bit, with something in place to make me feel more secure.

Any ideas for this? Thanks, love your writing.

The second you go from walking, which I would generalise as being medium to low angled ground (which can zip zag up to medium to steep terrain), to actually climbing (that’s moving using both hands and feet), the whole game changes.  On paths, your major hazards are slips and trips (wet grass, laces, tired legs) especially if the ground is bisected by rocky outcrops, hard snow or ice (think the top of Snowdon’s Zig Zags).  For me, if you’re using one hand then it’s still walking, but the second you face in and begin using two hands there is no path, only a route, then you’re climbing.

I often think the term ‘scrambling’ is highly problematical and dangerous, as it gives the impression that it sits somewhere between walking and climbing, so someone who’d not consider themselves a climber would still see scrambling as fair game when it is most definitely climbing.  I’d go further to say that in fact it’s the most dangerous form of climbing there is, in that it’s soloing in big boots on an often loose, dirty, wet and slimy rock!

Once you decide to switch from a walking ascent to a climbing one you’re using a whole new set of skills - well inbuilt ‘monkey skills’ - plus soft techniques, like knowing how to step on edges, foot orientation, the adhesion qualities of Vibram, hand and foot jamming, chimneying etc.  Stick a non-climber on easy climbing terrain, classic fifth class or easy/moderated ground, and they’ll be able to climb it as long as they have the bottle, but as these extra non-monkey skills are called into play they’ll become increasingly exposed.

As the ground gets steeper the moves must be combined and executed perfectly (such as sidestepping into a polished dimple in the rain in muddy boots), and very often you do not have a choice to not do them, unable to retreat.  Ask yourself how many times you’ve thought ‘if my foot slips here I’m dead?  Very often on this kind of classic scrambling ground you’re going from steep steps to easy ground interspersed with small paths, where any fall will either be fatal or highly injurious.  Now add in winter, with ice, snow, slush, hard grass and wet grass, axes and crampons, and you have a whole new set of factors, both that can increase your safety as well as make you’re more exposed.

An axe whacked into some turf or hooked around a spike is a great anchor point, but do you know how well bonded that turf is, how much you can pull for balance?  Will that axe remain secure as the angle changes?  How about twisting that axe pick into a crack?  Is your pick B rated or T, or is it rated at all?  What can you stand on in your crampons and do you know how steep an angle you can climb before the snow will give way?

I believe the second you stop walking you need to have a climbers eye for risk and opportunity, as in the opportunity the ground offers to move safely and the opportunity to die. Some background in roped climbing, where failure isn’t terminal, helps you find the ‘edge’, how well your body will stick to the rock when wearing Goretex trousers, the adhesion of a wool glove on a snowed up spike, how a crampon can smear at one angle but not another.  To find this out without a rope is a terminal exercise, and so the inexperienced ‘scrambler’ is like a blind man stumbling up the cliff.

If we ignore the rope for a second, I would say that a safe walker/scrambler/climber would be able to make a judgment call at the chances of climbing up steep ground safely, which can often be about appraising if you can downclimb if you can’t go up safely.  Nine times out of ten you’ll not tackle anything that will increase your danger or lose your time, and instead, go around it.  If that’s not possible, and it’s not easy, then you’ve probably made an error and should consider going down and find another way on.

If you’re committed and have no safety gear then your life is going to be in the balance of your skill, or the lap of the Gods, and if you pull it off then don’t see that assign you can keep putting your life in harm’s way.  I think if you could talk to some salty mountain rescue team member they’d tell you stories of many people who pushed their less than certain skill on uncertain terrain in uncertain conditions and lost.  There is nothing wrong with finding a safe path.

If on the other hand you’re equipped, have a rope (‘where there’s rope there’s hope’), some protection, crampons and axes, helmet, then maybe you’re going to be able to tip the balance in your favour.  This of course assumes you know how to use a rope, protection, axes and crampons!

A little bit of knowledge is a dangerous thing, and I always tell the keen to go and do a basic rock-climbing course, as they can learn rope skills, placing protection, even moving together.  Add in a winter climbing course and all of a sudden your skill base and tools are really going to provide some armour on the hill.  Once you know the basics you can pare them down, removing things like harness and replace them with a bowline-on-a-Coil, a full rack for half a dozen pieces, rock boots for walking boots.  It’s easy to pare down when you know the cost, but dangerous when you don’t.

For decent without a rope, I’d 100% say you should be either finding a safe way down, or abseiling, or going back up.  With a rope, it’s worth learning how to do a basic old school classic abseils (so you don’t need a harness), as this will get you down most steps.

The idea of some sort of rope soloing (which I think you’re talking about) is kind of beyond the scope of anything I can recommend here and in this case the old adage “If you’re going to solo, then solo” may be best, as it may well get you into major difficulties (you could check out my Winter soloing article though for some ideas).

Good luck with your climbing and I’ll leave the final words to Mr Whymper, words all climbers and walkers should keep in the forefront of their minds at each step.

“Climb if you will, but remember that courage and strength are nought without prudence, and that a momentary negligence may destroy the happiness of a lifetime. Do nothing in haste; look well to each step; and from the beginning think what may be the end.”