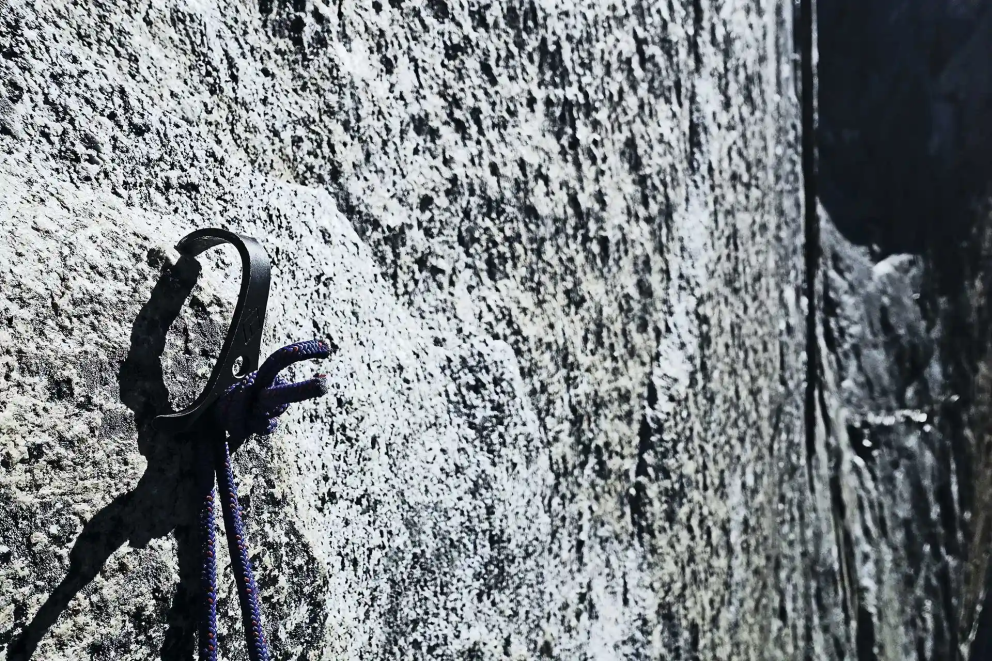 I just came across this interview I did for Montane after I got back from soloing the Sea of Dreams. I’d forgotten I’d done it, but there are some interesting things in it so reposting it here:

Spending fourteen days on a big wall must put major demands on your body, how do you prepare for such a climb?

To be honest, before I set out a few people voiced concern that I looked a little out of shape for such a venture being a bit on the heavy side (my nickname in the Valley is ‘Big Andy’).  To be honest, being a bit fat seems to be normal for me as my life in between climbs and trips tends to be quite a sedentary one, being primarily a writer who climbs (and less a climber who writes!).  Luckily I’m natural quite strong and have a body (under the flab) well suited for heavy lifting.  I also lose weight quickly and lost about 10kg over the 14 days (a week later I need to buy a belt to keep my trousers up).

You had your 44th birthday while on the wall, does age make it harder?

I was only 27 when I soloed Aurora (my first big wall solo), and 29 when I did the Reticent, but to be honest I found them all about as hard physically (as in very hard).  One advantage that comes with age is that I had a massive amount of experience now I didn’t have on Aurora or the Reticent.  I now have more confidence to know I can cope as well as the skills to both get up the route and deal with problems.  Unlike a lot of big wall climbers, I have a very broad base of experience from UK rock climbing, Alpine winter climbing, expeditions and wilderness walls, along with 34 ascents of El Cap (with four solos and two one day ascents).  When I’m on the wall alone age also allows me to know myself much better, to feel the boundary between a lot and too much.  Where once I would push on and get dangerously tired - so tired I lose control or make dangerous mistakes - now I can foresee it, and so slow down.

I think the amount of hard work and pain (pain of every kind) helps you to get some perspective on the troubles you bring to the climb, plus there is a lot of time to think and process stuff when you’re alone for two weeks.  The last year was a very tough one on a personal and emotional level, and this had a big effect on my dreams and objectives.  Trying to solo the Harlin on the Eiger in February was an attempt to find this balance, but the weather was terrible - plus it was probably too soon - I wasn’t safe to be left with myself.  The Sea of Dreams was probably a bigger and harder objective than the Harlin but now I was ready - the time was right for a reboot.  When you get to the end your mind and body are so tested you feel as if you’ve been broken down onto your base elements, like there’s nothing left but your beating heart.  Then comes the healing, and the understanding and the learning.  You feel knew - you feel invincible (for a while at least).
How important is your gear on such a climb?
Much of the climbing I do is very gear intensive as it tends to be long and committing, plus when you’re alone you need to be 100% sure you can look after yourself.

On El Cap, I wore the Primino base layer for 14 days straight using it both protect me from the sun, and keep me warm when the sun went down.  This is a super simple base layer but it’s a good weight that doesn’t smell (too bad!) even after so long on the wall.  I also wore the classic Terra pants that always work well even though they are super lightweight.  In my haul bag I had a lot of extra clothing to wear in case of storms, with a full shell and Ice Guide belay jacket, but only really through on my Power Hood fleece a few times when it got cold and windy high up.

Can you explain your relationship with Montane?

I guess I’ve been using Montane kit for a long time, and they sponsored the first expedition ever went on (Fitzroy in winter in 1999).  Now I give feedback on current clothing and equipment as well as work on ideas with the design team.  The two current projects I’m working on are a pair of super-tough trousers for rock climbing (like jeans for big walls) and a super light but also very tough alpine pack.  One thing I really like about Montane is that they are small enough to be open to new ideas but big enough to bring them to market, even if they’re very specialised - something that few companies do these days.  In the next year, we’re looking at hybrid clothing for rock and alpine climbing, the idea to make clothing and equipment that really helps make a difference whatever you’re climbing.

I’m heading back to the US in a few weeks to climb in the Sierras then back in Sept with the filmmaker Jen Randall (who made project Mina) to make a film about soloing called ‘Journey through the Brian’.  After that I’m on tour again with a show called ‘Cold Mountains’ which looks at my relationship with the cold, featuring my trip to Antarctica in 2014 and comparing it to my first few trips to the alps in the ’90s.  After Xmas, I’m hoping to try the Harlin again - only with a partner this time. In between, I’ve got to write a new book!