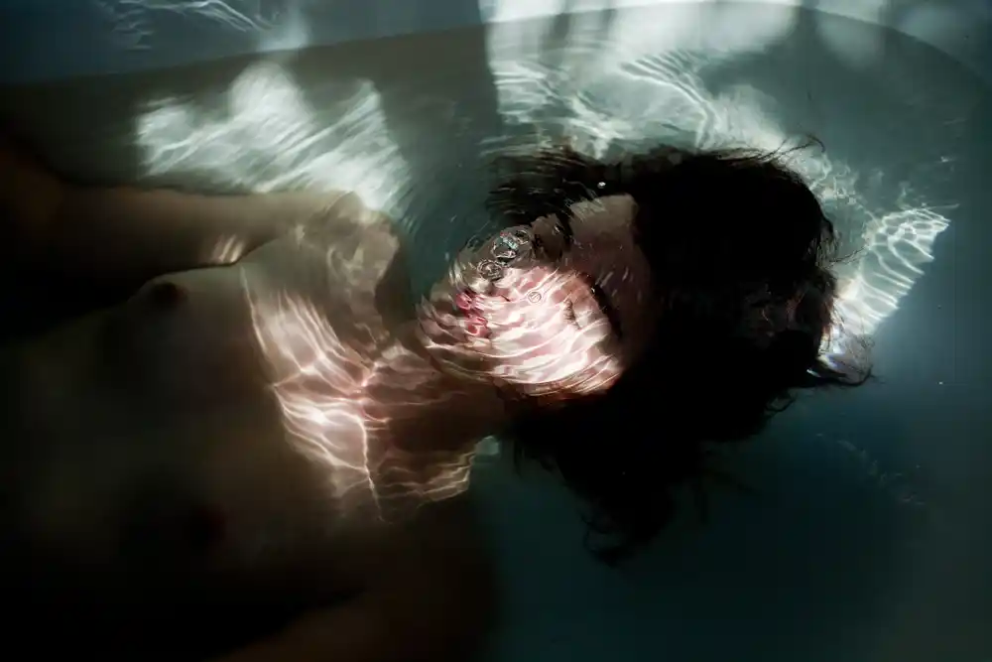 “She’s got a nice body,” said Vanessa, nudging her head towards the waitress as she moved around the Banff centre tables, adding she’d seen her that morning in the swimming pool.  I instinctively felt offended, my back straightening up righteously, lemon lips in an angry pout, at such base objectification - sexist - misogynistic.  But then Vanessa’s a woman, so I got confused - cognitive dissidence they call it I’m told, that feeling, like feeling aroused by a woman on a bike, trying to pass her in your car, your base eyes on her great bottom, long blond hair trailing, only to see it’s a man as you pass by.  Is it permissible for one woman to say another woman’s got a nice body, I’m not sure, after all, I’d never heard a man say the same of another man - well apart from a Bavarian lusting after my calves (they have a thing about them I’m told).  I wondered if she’d actually said to the woman: “Wow, you’ve got a nice body” if she’d have been offended or simply seen it as a compliment?  I know if I was told a man had said to his girlfriend that I had a great body I’d not have been offended, but then I’m wired up wrong.  I wonder how a man would take such a comment in a swimming pool, like ‘christ you’ve got a nice arse’ or ‘don’t you have nice skin’. I suspect you’d end up getting punched.  Maybe Vanessa, being Irish, is somehow immune from giving offence, like a child.  Irish people, long burdened under real hate and malice, seem to be able to recognise where the real danger lies in what we say.

I had a guy try and chat me up the other day, while I sat trying the write a blog, which was annoying as I ended up having to talk to him, not rude enough to just rejecting men’s advances.  He kept telling me he was from ‘County Mayo’ and I began to wonder if that was Irish code for ‘fancy a shag’.  I’m told I’m a homoerotic kind of guy, that if I was gay I’d be a bear - nice to now - if I was gay.  I took this as a compliment but now wonder if it just means you’re fat and hairy?

It must be a burden to be beautiful, to have people hitting on you all time. I asked Catherine Destivelle this week, as we sat together drinking wine that came at $13 a glass if it was hard being so beautiful if it was a bit of a burden.  She looked confused for a moment, then said ‘Me?  Beautiful? pointing at her bosom with her short finger.  “I don’t think so” she replied, like a pro, something many beautiful people say, but only the truly beautiful believe.

I’ve always thought I was crap with woman, but that was because I was crap at the beastly side of being a man, that brainless lusting and unsubtle dance that men tend to do.  It was only when I got it, that you don’t need to play that game, that yes, it was effective just having a nice face, nice hair, a six-pack, but that you never got a woman really worth the effort, not for all those sit-ups.  “You’re really good at chatting up women,” said Al, maybe the most handsome man I’ve ever met.  “Me?” I said, pointing at my bosom?  “You just charm them”.  Vanessa says it’s because I look like a pug, look all soft and cuddly, while also a bit violent.  She calls me her snuggle pug and warns me never to look into the eyes of any woman.  To do so would have them under my spell.  “You’re amazing at talking to women” repeats Al, no doubt because he’s so handsome he doesn’t have to. I put him right, that the skill what I’d call ‘just talking’, rather than ‘talking to fuck’.  In fact, the best way to chat up a beautiful woman is to not chat her up all.

An example of this was the other night me and my mate Jon were sitting in a bar at 1 am a bit worse for wear,  just the two of us talking about books, neither of the best cards, in fact, both very bent and raggedy.  All of a sudden this beautiful young woman plonked her self down between us.  “Are you a prostitute?” I asked. “No!” she replied, a little shocked (that’s another tip there, a shockable woman is best avoided - well for me anyway).  “Then why are you sitting next to us?” I asked.  This comment was some form of rejection of her company, and so she stayed.  She worked for Google and seeing as she was beautiful and we were not, we just talked.  But soon enough more men appeared at the hunting spot, sat around us, that “can I join you?” really a “can I fuck you?”, to her, a “can you fuck off?” to us.  Now the one thing young men respect more than anything is a great hunter, that’s why woman feel like meat.  It’s shitty and crap, but we’re just animals.  Get over it.  “The best way to chat up someone, well a woman, is not to chat them up”, I said, adding the words “a beautiful woman”, that being my first move.  “Go on” she said.  “Well the first thing you don’t want is someone who knows she’s beautiful like she’s doing you a favour, the reason being they’ll be high maintenance, crap in bed, and make you pay for every second of your company”.  Again this was another move.  “What you want is someone who’s beautiful, both in body and mind, but mainly mind” (another move) “but who has a fabulous flaw that stops them feeling perfect”.  Now she was leaning forward.  “You have a flaw, it’s about your childhood, you feel like a faker, you have a beautiful mind trapped inside a beautiful head.”  Finding a woman, or man, is not - should not - be about fucking, it should be about seeking an ally, for one moment or many.
“I’ve got a big cock” interjected a bloke beside me.

Have you ever done that game where you make a list of the three people you can have sex with without consequences?  It’s worth taking some time over the list, as although you’re meant to have a free hand in the picking, I did meet someone who told me this included his wife’s sister and his wife’s mother - not a smart list.  When asked myself, I realised I had two blokes on my list, which is funny as, as I’ve already mentioned I don’t find men attractive in that way (I told the guy who was chatting me up that my wife was coming soon, and he finished his coffee and left).  Now I know what you’re thinking, who’s on my list, who are these two blokes.  Calm down.  My list is Tom Hardy, Micheal Fassbender, and the third a sandwich.  I’m not sure why the last one’s a sandwich, probably because it’s funny, but maybe like having three wishes maybe that’s a bit of a waste (although I have had some bloody nice sandwiches in my time).  When I thought about it I think my list is just about spending time with someone, but maybe not Tom, I think I’d just like to fuck him.

Before I met Vanessa I told her I had a sexually transmitted disease, but we still went out on a date.  I didn’t, but how’s that for a test of character.

Why we sustain, why she’ll be my wife, is because she’s un-shockable, does not take offence, a good trait in anyone, another thing I love about the Irish.  To be aroused by someone, or to be shocked by them, is a noble thing, be it in your loins or in your head, and yet I feel some - most - have become desensitised to its joy.  Sex, loving or fucking is formed in the tussle of it, the same with ideas, to fight and to win or lose, that’s what charms the pants.  I’ve been lucky in my life to have known only women who did not quite know just what they were, would one day become, maybe their only fault their choice in men.  This is a story about control, control over the mind of another, love or rape either end, the stalker or the tale of love’s persistence.  We all believe all we want is control, but we don’t, we want to be out of control.

And so, the end of this story.  I stand at the party, boys and girls out to find one another, music loud.  A woman comes up and begins to talk to me, sees my pug face all charming.  The waitress walks by, that waitress, and so I say “She’s got a nice body”, and instead of the conversation we could have had, written here, she lifts up her hand, shocked, and she walks away.