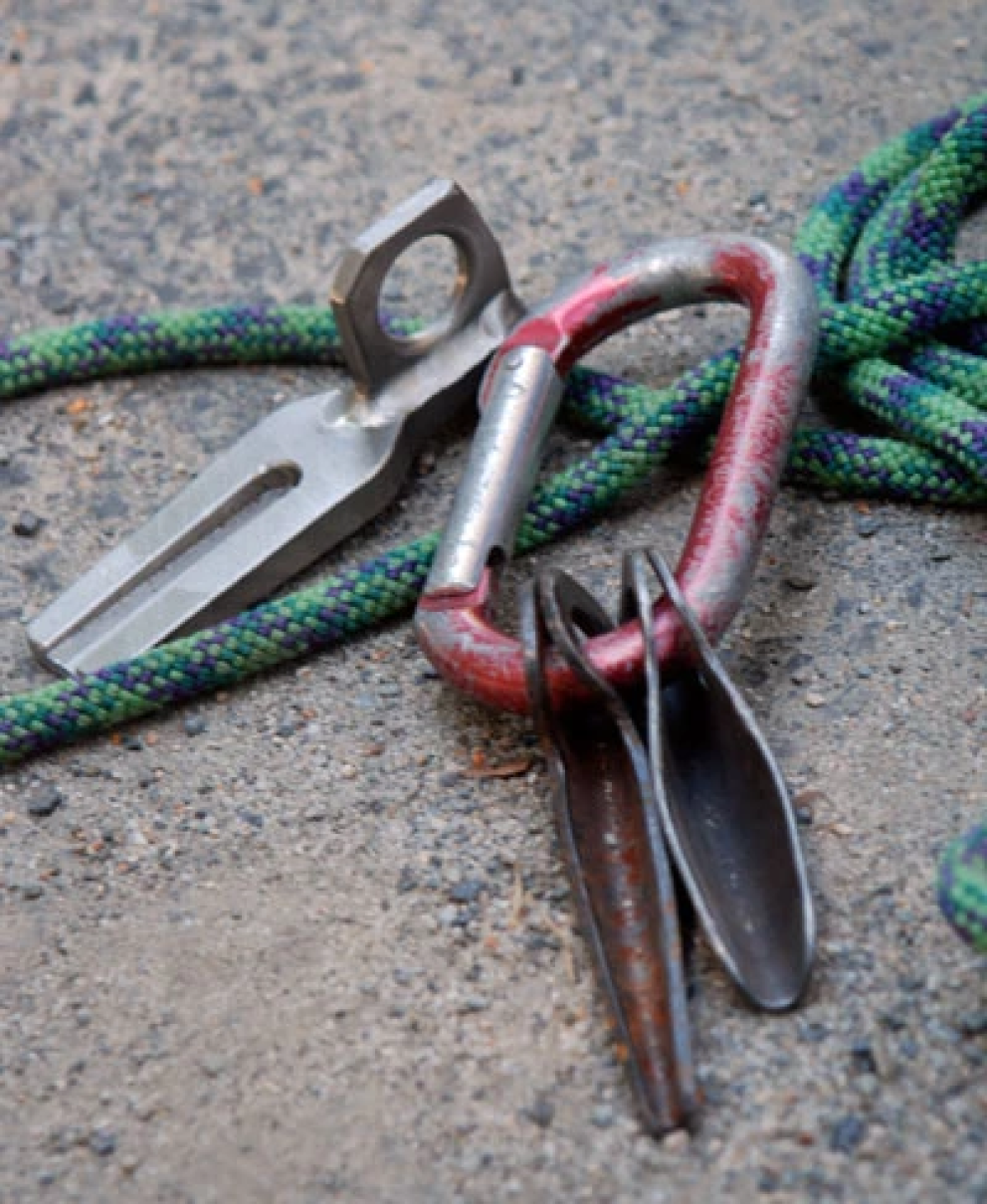 What rack would you take on an alpine solo for the easier grades (up to AD+)? I’ve seen the Steve House video of his solo gear list, but he runs through it a bit quickly.

Keep up the awesomeness.

Before I go on I just need to stress that soloing of any kind is a high risk, and what I writing here is not instructional, but simply looking at how other people do it.  If you want to solo and what you read here makes you safer then that’s great, but soloing is very very high risk.

Anyway, solos can be split into three main types: free, lightweight and heavyweight.

Free soloing is what you’d imagine it to be: no rack or rope, just you and your rock boots and a chalk bag (or axes and crampons), climbing with nothing to weigh you down.  On such climbs, you need to climb or walk back down from the top, and you cannot fall, which means that most sane climbers they must climb well within their grade (those that don’t tend to last long).  The current master of this style is Alex Honnold.

Lightweight is used when you may need to climb close to your limit but also need speed, and don’t want to get bogged down with a heavier style of climbing.  You may also want the ability to descent safely (from the top or mid-route if something goes wrong); or have some back up on short sections.  This style is generally used on alpine terrain, where a climber’s connection to the world is less certain than on a rock route.  This is the style employed by people like Steve House, Ueli Steck and Colin Haley.

Heavyweight is almost exclusively used on big wall solos, and sometimes on big alpine routes (Manitua on the Jorasses for example), and affords almost the same level of protection as having a partner (ignoring the fact that you have to climb everything twice and if something goes wrong you’re on your own!).

If we ignore the first and last categories, I think lightweight soloing is what you’re interested in.

The climber trails (better than carrying) one rope (half, twin, or single depending on how much they may need it) and carries a skinny trail line (5mm Dyneema or thinner) in their pack, allowing full-length abseils and the ability to protect themselves on pitches (with only one full weight rope they will have to rap the lead rope to clean.  Some climbers who feel they won’t need to protect themselves, but need the safety net of being able tp do full-length raps may carry 2x60m or 1x100m trail line (Beal 7.3mm trail line or 5mm Dyneema).  The use of skinny or ultra skinny ropes for abseiling is a technique that must be practised and can be highly dangerous.

Here you have a single rope, either a skinny single or a half rope, allowing you to make thirty-metre abseils, and protect yourself on a full-length pitch.  This technique is lighter, but only being able to make half raps means you’re more committed, as you will have a tiny rack as it is, and would only be used for making short raps in between down climbing (useful on routes like the North Face of the Droites).  With this technique, it’s generally best to clip the rope in at the halfway point, so you have two trailing strands.

Less than one rope

Some climbers will only have a very short section of rope, and use this to create a loop belay system (for an explanation go here, and this is how Ulie Steck would protect himself on the Eiger, as he knew the route so well that he only needed s short section of rope to span the crux ‘on-off’ sections of the climb (he also had no time for climbing up, rapping down and cleaning).

The rope soloing mantra is: ‘with the rope you have hope’ but if you take too much then you’ll remove all the advantages in speed of being alone.

Again this comes down to what kind of route you’re doing, how long it is, and the rock type.  Your gear has to do two things: give you anchors for the descent, and protection on lead.  One thing worth stressing is that even when roped soloing most soloist will be placing little or any gear, and will be using the anchored end of the rope as their main safeguard (meaning a factor 1 fall), and so it’s to be argued if really the protection is simply for the mind not the body!

On big ice routes, the obvious gear would be a single ice screw, as you will need it to create V thread anchors (these can be used as self belays as well as on the descent), and allow yourself to be secured quickly.  I’d probably take two as they can be easily dropped (also take a threader).  Screws can also be used as rock pro in an emergency.  If you’re using a skinny rope, then this can be threaded into the V thread instead of the cord.  If you don’t have any cord then it’s worth practising the retrievable ice screw trick.

Nuts are light and can be hammered into places they don’t fit, but tend not to be great at creating self-belay anchors as well as a cam or peg.  They are also good for rappel anchors.  I would carry half a set of nuts.

Cams is very handy but heavy and ideal for setting multi-directional belays (vital for ropes soloing).  Roped soloing is sketchy in nature, and some climbers will just plug in a cam that will work for a two way pull and call that the belay (meaning if they take a fall factor 2 or 1 the belay should hold).  Personally, I’d be happier having two pieces, but a textbook 3 point belay will probably be out of the question with such a small rack.  Depending on the route, I’d probably carry a Camalot .5, .75, 2 and 3 or maybe two Link Cams (size 2 and .5) as they alloy you a much bigger range from two units.

Pegs are handy for soloing as they can be multi-directional, but their downside is that they’re heavy, and are best used just for belays.  I’d probably carry one long Bugaboo and two baby Angles (1 and 2).

The overall aim of the solo rack is to keep it light, and only have it there for very short sections and retreat/descent, and only employed on 5% of a route.  Anything more than that then the route is too hard to solo and you need a partner, or you need to employ a heavyweight approach and take days not hours to climb it safely.