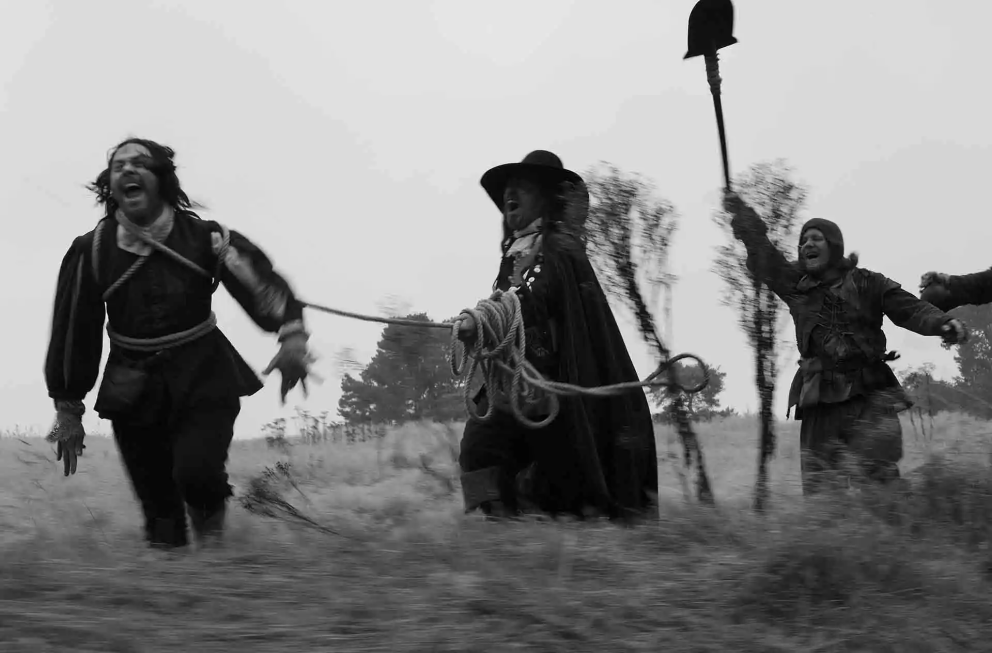 Anyway, this isn’t a film review, but a short blog about 17th Century outdoor kit.

In the film, you have a number of characters dressed in what looks to me as very authentic clothing of the time.  Now my bread and butter is clothing, as without it I’d both be arrested, and moreover, I’d have long since frozen to death on some climb.  I take a great deal of interest in all-new fabrics, designs and ideas about what to wear, but like most people, when I see a picture of some guy dressed like Oliver Cronwell, I don’t look further than the costume.  And yet for some reason, I found the costumes in A Field really fascinating, and instead of looking at them as costumes, I look at them as if they were performance clothing.

So here are some notes on the stand out features of 17th Century kit:

Wearing a large hat, made from felt, was a great idea, as it would keep your head cool in the sun, and also deflect rain and wind and keep your head warm (probably also stop head lice jumping into your hair).  The hat worn by Micheal Smiley is a classic Cromwellian hat, that must have been like wearing an umbrella on one’s head.

Now I know some superheroes aren’t big on capes these days, but I really can’t think of a better piece of outdoor kit on the market (not that it is).  Think about it.  A waxed wool cape (people would rub wax or lanolin onto the fabric) would help shed a good deal of water (you may have multiple layers of wool, overlapping at the top), keep the wind off (it would be lined with cotton or silk), could be used as a blanket or a tent (Mike Horn once survived a night in the Arctic by crouching over a candle while wearing a poncho when his tent burnt down).  When moving fast you dump all the heat and sweat (cape flaps up when at speed, spilling out heat), yet warm when moving slowly (drapes well when moving slowly).  The big drawback with capes is once you carry anything on your back, they don’t work (people in the 17th century would have very little, or it would be carried by a donkey or horse).

Fabrics were not stretchy back then, so breaches allowed a good level of knee flexibility (vital for hunting or fighting). Clothes were also baggy, will allow free movement (think of a judo outfit), and I expect a bloke in jeans would be outmatched (clothing wise) with a man wearing a 17th-century outfit.  These too would be made from wool.

Quite a few characters wear what we’d call gaiters these days (called leggings back then), which were made from leather or canvas, and designed to do what gaiters do to this day (I guess back before roads, any journey was ‘off road’ so gaiters were vital).

The best way to spot an alpine guide is to just look for the one wearing the gilet (a pretentious name for a body warmer), but their continued use amongst those in the outdoors is no accident.  Having a sleeveless top allows you unrestricted arm movement while also further improving the dumping of heat (just unbutton the front).  I expect the waistcoat was also vital in keeping your valuables safe, having many pockets.  The jerkin is a heavyweight jacket without sleeves, made from heavyweight materials (leather or wool) that would further protect the wearer from the weather, and also from weapons.  The Jerkin was still being issued by the British Army in World War One.

One thing I noticed was that several jackets had sleeved jackets that had slits that could be unbuttoned to help keep cool (people wore thin linen undergarments), which, when used with a waistcoat, jerkin and a cape would probably very effective.

If we take the clothing as worn in the film as being close to that worn in 17th century England, then I think we should give our ancestors some credit, as what they probably had was state of the art (well the wealthy anyway), and in some ways, maybe better than what we have now!