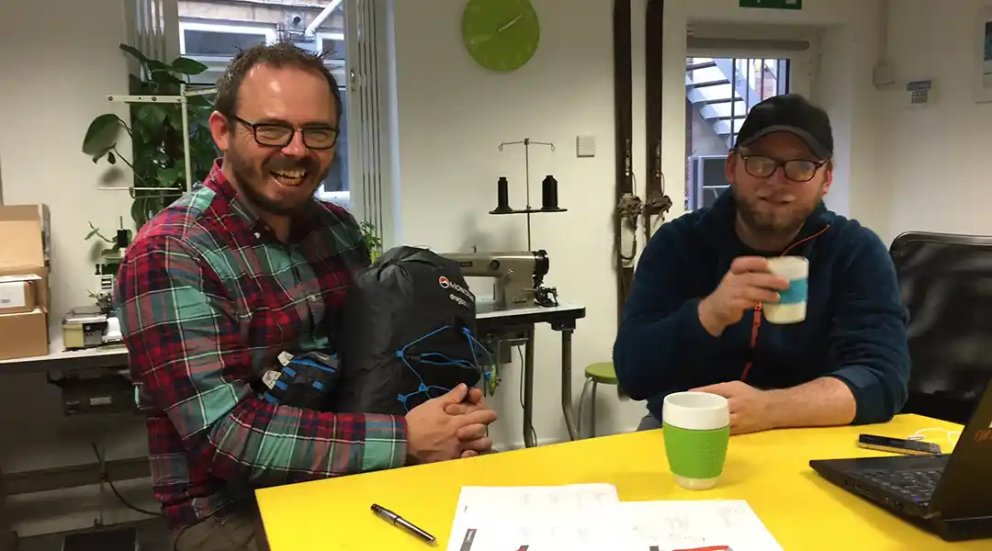 I started working with Montane earlier this year, a company I’ve long respected for its willingness to push the boundaries of non commercial/niche kit, and who’d been giving me gear for quite some time (I still think there is no better system for big gnarly winter routes than Extreme smock and salopettes).  Instead of just being someone who just gets kit and that’s it, I wanted a more hands-on approach as I thought my ideas on equipment and clothing was in line with there, and also because they also may just be crazy enough to actually make some of it!

I remember trying to have this type of relationship with another gear manufacturer once, who was generous to pay me a small fortune to just go climbing.  Not feeling comfortable with that I tried to get involved with the design process, as well as getting the design team out on the hill (so they understood just what it was they were designing clothing for).  I remember on one training trip in Scotland, walking in some harsh weather, one of the designers, who was in charge of mountain clothing, saying “Oh wow, now I know why you have a wire in the hood”.  The relationship with X brand sort of fizzled out after I made too much fuss, seeing that innovation, fresh ideas - that I think were commercial - never made it to the customer (who wants fresh ideas), due to sales teams more used to selling fitted kitchens.  In the end, the design manager took me aside and just said “You stick to climbing and I’ll stick to making gear”.

But what makes my opinion worth anything? Well, I’ve been active in the outdoors since I was a kid, and so have seen and used a huge range of gear, from the earliest days of Rohan bags, cotton shelled sleeping bags and non-breathable shells, right through to laser cut gossamer shells and welded backpacks.  And then there are ten years of working in retail, often pushing and persuading people about new ways of doing things, never concepts of how to stay comfortable, always looking for the next thing (something old that now has its time).  Next comes gear reviewing for mags (High/Climb), which allowed me to take this knowledge and run with it, to explore some ideas about how to best use gear as a climber, alpinist or mountaineer (articles such as ’The Art of Not suffering’ still being referenced and linked to a decade after it was written).  Lastly, there’s been a lot of working with brands on new kit (some niche, some not so niche), including Patagonia (I was one of their 5 international gear testers), PHD (designed their belay jacket, and some sleeping bags), Rab, Crux (worked on the AK47 packs), Berghaus, Black Diamond and many others.  So I think that considering all that, I think my opinions have some weight, both of a end-user and commercial level (bloody hell, this sounds like a job interview!).

And so with Montane, the brief is to come up with some innovative products and help tweak the existing ones.  I often make a joke that Montane is full of nerds, which I think may upset them a little bit, after all, they see themselves as climbers, runners, mountaineers first - not nerds.  But they are, they live and breath stitch counts and fabric weights, meetings often sounding like we’re talking about Jquery or molecular physics than waterproofs.  But for me being a nerd in this world is ideal, after all the nerds run the planet (Google, Facebook, Microsoft, Apple), not politicians.  They also have a very commercial sensibility, that they are a UK brand that is making kit to be bought.  Sure they’d love to laser cut and bond everything, let their egos run wild, but they don’t, they keep to simple principles like the best fabric, the optimum cut, at a price that allows it to be bought by the greatest number of people (their Prism jacket is one of the classic and popular jackets of our time for these reasons).

And so what are we up to?  Well, most of it is a secret, plus what we work on now won’t appear until spring 2016.  We’re working on a pack that I think would really answer many of the demands of modern climbers/alpinists/mountaineers, but both virtually indestructible, and very light, plus at a price we can afford (it’s not a £500 Dyneema pack!). This is a tricky one, and fits with that old business adage that you can have a: speed b: quality c: price but you can only have two,  quite fitting, only in this case it’s a: robustness b: weight (there’s c: complexity as well, which the best way to cut weight in a pack).  One thing we talked about was the idea of user responsibility, that at some point the designer must stop hand holding the end-user, and allow them to make a super simple piece of gear work (like not having axe and crampon attachments, knowing the user can just stow these under the lid and down the side compression straps). The same goes for having extra-long straps that work with expedition/approach loads.  These straps are always cut short because they will look strange in the store, but once out in the field, trying to secure a mat to the side (along with snow states, wands, ski poles) they just don’t fit.  So this concept of the ‘experienced’ end-user has been at the heart of the process.  The last item we’re working on is a pair of what we call ‘big wall pants’ but again the idea is something that is very tough, hardwearing, that will work on the mountain and walls, but also just work as an ordinary pair of everyday pants.  The reason for this design focus is simple.  Although Montane make sell a huge number of pants I can’t wear any.  This is not due to my overgrown thighs (which are a problem), or the unsuitability for the climbing I do (I’ve worn the same pair up El Cap 4 times without a mark on them), no it’s simply the fact that when I wear I feel like I look a little too much like Bear Grylls!