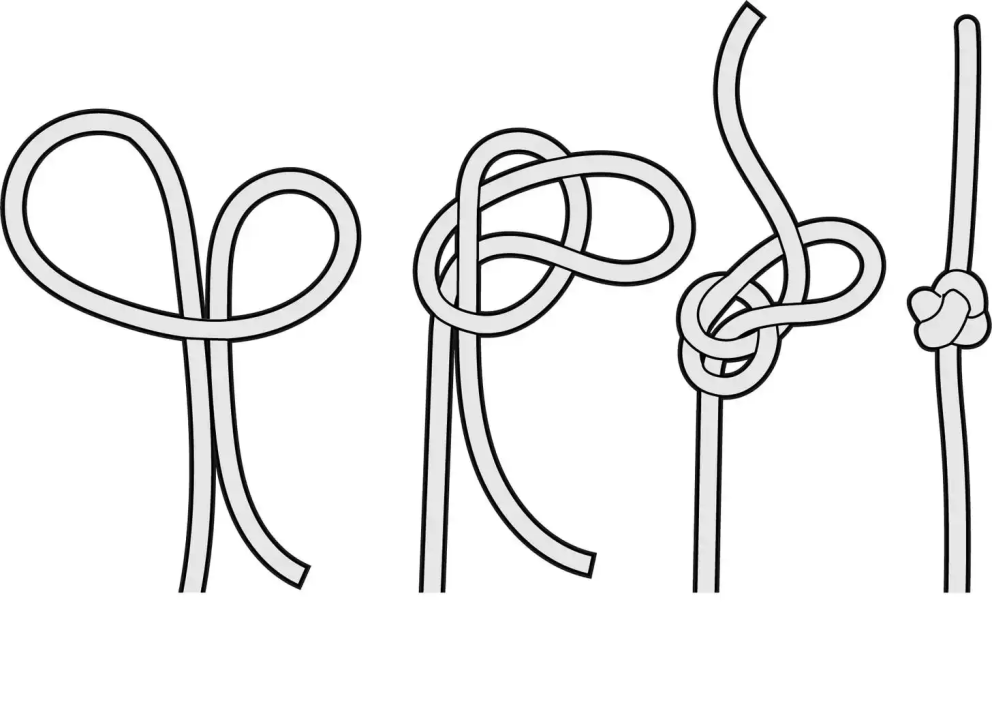 Here’s a follow on freebie part from my book Down. It would be great if people could share these on their social media.

The use of stopper knots, tied onto the ends of your rappel ropes, is designed to create a ‘closed system’, stopping the climber zipping off one or both ropes as they descend. This pilot error, which is generally terminal, is caused by the following:

For a long time, the stopper knot was considered the default method. But really, it should only be viewed as closing the system, as falling 60-metres, only to be caught by two little knots, will still probably prove fatal anyway.

Secondly, the force of a climber’s descender hitting an Overhand knot tied only a few inches from the end of the rope could simply roll the knot off, or even be sheared off, if using a sharper ‘framed’ descender.

Also, if using a figure-8 descender, the knots would simply pass through the descender, thus indicating that any stopper knot needs to be one that is clipped into your harness.

And so this subject requires a little more thought.

Below I will list a number of common knots, some good, some not so good. I would advise tying all knots 1-metre from the end of the rope, the reason being that it reduces the risk of a knot being rolled off the end of the rope, plus it gives you more rope to play with if you come up against the stopper knot with your descender or back-up-hitch (having 10 cm of tail beneath your descender is not ideal).

All knots should be pulled tight, as sloppy knots will come apart quickly.

This is the simplest knot but has a tendency to come undone and rolls when loaded from above. This knot is also too low profile to act as a good stopped knot, either for the hand, or with an out of control device.

This is more effective, being a little bigger and more able to stop the climber. This knot remains small enough not to be too snaggy on bushes or trees.

This is even more effective.

This creates both a very effective hand and descender stopper but also allows the rope ends to be clipped into the harness, important if you find you’re at the end of the ropes. Having a knot you can clip into can also be handy if you find you have to climb back up under belay, as you can just leave the rope through your descender and clip the bight into your belay loop. The best Figure-Eight to use is the directional eight.

Also named the Ashley stopper knot, this is a dedicated stopper knot that’s easy to tie, takes up only a small amount of rope, yet creates a very large and strong knot.

Don’t Tie Your Ropes Together

In the past, climbers used to just tie the ends of both ropes together to form one big knot. Although this was very effective at creating a stopper knot, it should be avoided as linking both ropes means the twists created while descending can not simply work themselves out, as is the case when ropes are separate.

Will A Stopper Knot Save Your Ass?

Looking at the reality and effectiveness of traditional end knots, their actual role is primarily as a hand stop, to tell the climber they have reached the end of the rope, and not to stop a plummeting climber who has somehow lost control. This might sound like something that would not happen, that you’d notice, that you’d grab the rope before it whipped through your fingers, but unfortunately, the many fatalities prove this not to be the case. It’s all too easy to be so focused on looking for the next anchor, going further and further, that the rope just slips through your hand. The stopper knots do a great job at stopping this from happening. Better still, if you’re running a back-up-hitch then this is likely to catch you on the stopper knots before they hit your device.

As for stopper knots arresting a climber from hurtling off the ends when they’re out of control (they’re not using a back-up-hitch), then there are more variables at play, such as the size of the rope, the knots used and how much tail is out. But none of these are a guarantee.

Reasons Not To Use StoppeR Knots

The primary reason for not using a stopper knot is they are prone to snagging on bushes and trees, or falling into cracks and getting jammed. This is not a problem if the ropes are falling straight down the line of descent, as all these problems can be sorted out (remember never to rap below a hang-up). But they can be a major problem if it’s windy and the wind blows your rope ends way off route. The reason for this is that around 90% of the time you can retrieve an un-stoppered rope that has snaked around trees or branches. But once you have an knot in the end, the knot may anchor in place and prevent it from being pulled out (they love the crooks of branches).

Many climbers will also not use stopper knots when they know exactly where the ground or next belay station is and will depend on their back up hitch instead.

Personally, I take a very flexible approach and will use stopper knots when I need total security, such as when I don’t know where the next anchor will be, or if it’s dark. In such scenarios, I’ll clip into my stopper knots as well, for extra security.

An alternative to tying stopper knots is to connect the rope ends to the leader’s harness. The advantage of this is that the ends remain under the control of the leader, (important in windy conditions), and also guarantees the leader will not slide off the ends of the rope, which is ideal for exploratory rappels. When adopting this method you can no longer throw down the rope ends, but instead have to locate the mid-mark and throw this, or throw down the first quarter mark, which drags down half the rope.

An alternative, on steep ground, is to just feed out and lower the middle down the wall.

Negatives are that on ledges or snaggy terrain this method can result in more time wasted through sorting out tangles for the leader. The method can also result in the ropes becoming twisted as you reach the end, depending on how twisty your device is.

Although a Figure-Eight or Overhand will be the most obvious knots to clip, I prefer the Clove-hitch, as once untied (which you can do one-handed), there is no knot left to jam or cause you problems.

One system I use a lot on bolted rappels, where the abseil knot is used as a blocker, is to only use one stopper knot by clove-hitching the end of the UP rope into my belay loop. The advantages of this system are:

At The End Of Your Tether

There will eventually come a time when the next rap station is at the very end of the rope, which in extremis might require the stopper knots to be untied. If you’re forced to do this and can clip into the rap station, be aware that once you let go of the weighted ropes, the rope ends will spring up out of reach. Once this happens the leader must notify the second the rope does not have stopper knots anymore; otherwise, they can easily rap off the end.

This scenario exposes the team to the possibility of the second, also losing the rope ends as they spring out of reach, which would mean both climbers are stuck without their ropes.

To avoid this, the second should tie an Overhand on a bight on the PULL strand and clip this to their harness.

Once clipped into the rap station with their sling, allow the UP strand to slip through the device, climbing onto the anchor with the PULL strand ready to pull.

Note: you should never drop onto a rap station via your rappel sling (your waist should always be below the sling attachment point) as this could break the sling.

If, for example, the route is overhanging, and you allow this to happen, and all climbers are at the belay, there is a good chance you may lose contact with your ropes altogether (they will swing into space), leaving you marooned. Not good.

Another example of this is when you reach the belay and untie the stopper knot from your PULL strand. Then, as you feed the PULL strand through the abseil point, you let go of the UP strand with the stopper knot still attached, which then swings into space and out of reach. This means that you cannot retrieve the rope, as the stopper knot in the UP rope will not be able to pass through the anchors above. This second scenario is perhaps the biggest argument against stopper knots, and why Clove-hitching rope ends is preferable (once you remove the Clove-hitch from the krab there’s no knot).

Secondly, once you’ve lost the UP strand of a rope you are greatly reducing your ability to deal with a stuck rope, either by pulling the UP rope (to check you are not pulling the wrong one, or to pull the knot out of a crack or slot), or climbing the UP rope. For this reason always keep hold of both ropes, only letting go of the UP strand when it is pulled out of reach.

To do this, the leader should always thread the pull rope once they are at the rap station, and secure the UP strand to either themselves or to the rap station, ideally via a Clove-hitch. Doing this also increases the protection of those following. The Clove-hitch is ideal, as once unclipped, the knot disappears.