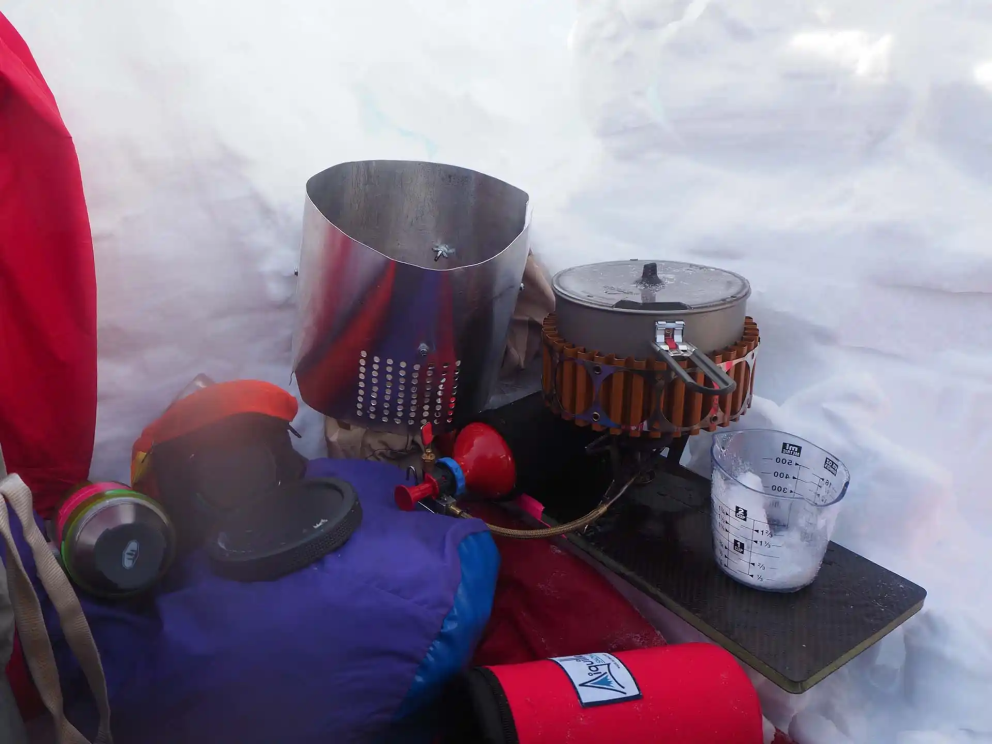 Thought I’d stick some climbing related photo up for any dispairing climbers! —— This is the stove we used on Denali. It’s a solid alloy DIY windshield/heat capturer, @msr_gear heat exchanger and 2.5L reactor pan, Whisperlite with cold-weather pump and neoprene cover on the bottle and CF board (has chessboard on reverse side). We also carried an XGK as a backup and a total of 4 pumps, with six weeks of fuel all in MSR bottles (never trust flimsy fuel containers as a leak not only loses you a week of fuel but also often destroys your foot). The big deal about the heat shield is that the pan is lifted 3cm up from flame to reduce CO poisoning (all cooking is done in tents, sometimes in the inner tent, and also snow holes and igloos, often with no ventilation). The combination of windshield, pan and exchanger meant we could get away with 0.15l of white gas per person (0.2L is usually a good baseline). We only used the stove in the evening, filling up a water bottle and two @gsioutdoors flasks for the morning, leaving some to start snow melting at the end of the day. The stove was primed most of the time with meths and used a @light_my_fire_sweden flint and steel (we carried 3, plus some lighters for burning trash etc). Takeaways from the set up was that the plastic lid on the pan melted (knew this from Antarctica in 2014, but it’s not that big a problem), but the pan also seemed to break up in the cold. If I could get one piece of dream kit from MSR it would be if they produced a pump that included a pressure gauge, so you could keep it at optimum pressure. One interesting thing was it got so cold (-40 and lower), that even the cold weather pump leaked, meaning for really cold use you need to take out the pump and carry it after cooking, putting the lid on the fuel canister (if you leave them attached at night fuel will leak out of the closed bottle and enter the stove and leak out, which could start a fire when you light it in the morning. I also found out that it can be hard to light white gas when it’s very, very cold, which can be overcome by soaking some toilet roll or paper in white gas and lighting that.